Honda Motorcycle & scooter India Pvt. ltd. Thrashed at least a million dreams of the biker clad who had speculated the launch of the sexy looking Liquid Cooled Streetfire today. On the Contrary Honda laid its benchmark by launching the never expected CB Trigger in midst of all the exotic speculations floating around. 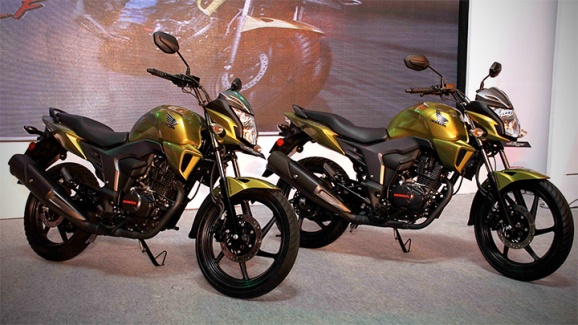 The newly launched CB Trigger is powered by a 150cc, single cylinder air-cooled engine that churns out a healthy and a decent power of 13.81 BHP@ 8500 RPM and 12.5Nm of torque @ 6500 RPM. Although the figures aren’t that jaw dropping, they can be considered pretty decent. During the launch, the company also claimed a healthy mileage of 60 kms per litre of the ever rising fuel prices keeping the buyers on the happier side of the mileage figures.

The Newly launched CB Trigger will be replacing the existing CB Dazzler which is expected to leave the showrooms soon. So, CB Dazzler fans grab one soon if you need to before it’s exhausted throughout all dealerships. Although it might look like Old wine in a new bottle, the CB Trigger has brought itself some sleekness and a host of other features that separates the CB Trigger from the old CB Dazzler.

CB Trigger gets Telescopic forks upfront and a Monoshock at the rear, the very same set-up CB Dazzler had. The Braking department carries a 240mm disc at the front and a 220mm disc at the rear. The bike also is the first in Honda’s CB segment series that comes with Combined Braking system as an optional accessory as seen standard in the latest of the Honda’s scooter line-up of Activa’s, Dio’s and Aviator’s. Honda also claims to reduce the braking distance by 32% by this system which is very interesting.

The Instrument cluster is an all digital, again, 1’st time in an all Indian smaller Honda that has the most required clock for tourers with fuel, Tacho, two trip meters & speedometer housed in a neat looking LCD panel. Apart from that, the bike also carries itself a host of other features that include; Maintenance free battery, viscous air-filters and tubeless tires.

During the launch Mr. Keita Muramatsu, President & CEO, Honda & Scooter India Pvt. Ltd. said that the new CB Trigger is Honda’s fourth launch starting from January 2013 and they are further strengthening their portfolio in the 150 CC Mass market with the newly launched CB Trigger targeted for the youth. His speech concluded by mentioning that Honda India will continue to launch new and exciting models throughout this year as their aim is to catch up the leadership position.

In Continuation Mr.Y.S. Guleria, Vice President – Sales & Marketing, Honda Motorcycle & scooter India Pvt. Ltd. Said that the newly launched CB Trigger offers real value to all the youth who look forward more of style, performance and advanced features with no compromise in riding comfort in one single package. Adding to that he also conveyed that the bookings of CB Trigger will be open from April 2013 and the deliveries would commence from May 2013 onwards. Adding to that Mr. Guleria also said that Honda is determined top sell approximately 1 Lakh units in FY’13-14.

Going by all the press release given by Honda today, it is understood that Honda is likely to target the Yamaha FZ-S, TVS Apache RTR series & Hero’s Xtreme & Hunk as the pricing is likely to be in the same segment. About the first ride impressions; watch out for this space soon.