As all of you are aware that the MotoGp action is still on and riders are in a cut throat competition. Moreover ace riders are competing with one another to the core. In all these mellow drama, Casey Stoner is standing out as the one tough rider with setting new records and touching new milestones in every race he competes in. We rolled out a post at Bike Advice last week about how Stoner beat other riders at the Catalan Grand Prix. Not much time has passed since then and Stoner makes it one more time in the British Grand Prix by setting up a track record time to race away to the pole position for Sunday’s race. 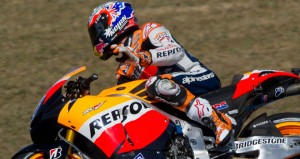 Stoner was looking great as he clocked in at 2 minutes 20 seconds on his Honda to secure his forth pole in six races for the Sunday’s race. Stoner clocking such an impeccable time was quiet obvious with his performances in the practice sessions. He recorded fastest time in both sessions of the practice. As a matter of fact, Casey Stoner is aiming to become the first Honda rider to win three successive MotoGp races after Rossi in 2003. The work is though half way through as the real test is on Sunday but Stoner is confident about it. He said that the team’s performance was really great this weekend and thus they are in high spirits and are ready for any conditions and challenges.

Rossi’s performance on his Ducati was disappointing as he bagged in the 13th position. Right behind Stoner was another rider from the Honda team, Marco Simoncelli. One of the British riders named Cruthowl was unlucky as he ended up injuring his collarbone. It is really unlucky for the sole British rider to miss out to race on his home track where he won two races last year. The bottom line of the story is that Valentino Rossi has yet again disappointed his fans by finishing 13th, looks like he is taking time to adjust to Ducati. All in all, Stoner looks like cashing into every given opportunity.