Saurav Ganguly is having the worst of all starts to the year 2011. First he was axed out of the forthcoming IPL and now comes the news that could leave Dada’s fans with despair. A cheating case is files against Saurav Ganguly and Kolkata based Vibgyor Vehicles by Ramji Makwana.

Vibgyor Vehicles claimed the mileage of their motorcycles to be 117 kmpl but when tested the mileage was around 60 Kmpl. And Sourav Ganguly is endorsing the brand! 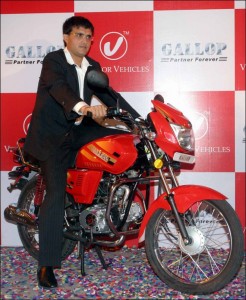 But what made Ramji file a suit against Dada? Well, it’s because the motorcycle manufacturer Vibgyor Vehicles claimed the mileage of their motorcycles to be 117 kmpl but when tested the mileage was around 60 Kmpl.

You may now think that, what has Dada done? Well, Saurav Ganguly is the brand ambassador of the Kolkata based Vibgyor Vehicles. The case is files on the grounds of cheating and false claim of mileage. The case is filed against Sourav Ganguly, Raja Bandra (Vibgyor CMD), Mrugan Banerjee (Vice President) and four other company’s officials.

All in all, it’s just not a good year for Saurav Ganguly. First he found no takers at the IPL auction then this case. Dav Whatmore, the coach of Kolkata knight Riders was lip sealed on the issue. However, he is happy with the fact that Knight Riders have moved on.

Speaking on IPL Whatmore said that it is important that big stars perform because thats what they are bought for. However, KKR choose guns like Gautam Gambhir, Yusuf Phatan and Kallis offering them heavy pay. We can only hope that Dada gets over whatever has happened till now and concentrate on the future.