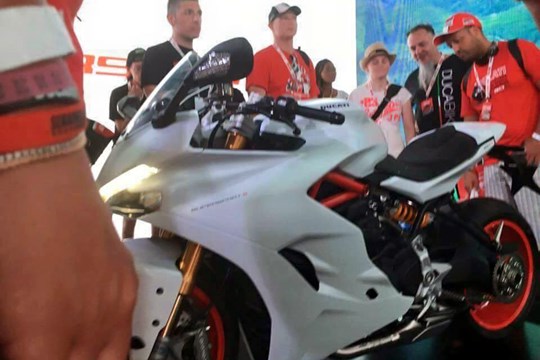 Ducati, like everyone wants to keep its upcoming products a secret. Well, at least that’s why they showcased their new and swanky motorcycle to Ducatisti under closed doors, just like they did when the Scrambler was making a comeback. But with thousands of people trying to get a view of the bike, there is only so much you can do to stop a spy.

Well, here it is, the 900 Supersport S! The brand new motorcycle is a true blue sportsbike and not a toned down entry level ride for beginners. In fact, it would be more appropriate to call it a sportsbike designed to fully enjoy the roads. Called as the Project 1312 for now, MCN expects it to be finally christened as the 939 Supersport S.

So what is the bike all about? Does it get parts from the new 959 Panigale? Here’s what Paolo Quattrino, the project manager had to say about the bike:

“The bike is brand new, it’s just the frame that comes from XDiavel and Monster trellis frame. There are some components used on other bikes but otherwise it’s a completely new bike. The Supersport is not an entry-level sportsbike. That would be a bike for beginners, this is not that. This is a sportsbike designed for the road. The dash is completely new with new functionality, and is ready for the Ducati multimedia system, the same as on Multistrada. The headlamp shape is completely new, the shape was inspired by Panigale but the headlamp has daytime running lights. The exhaust is new as well as the complete fairing.”

He also added that while the bike may be slightly behind the 959 Panigale in terms of performance, but it belongs to a completely different family. The origin though is the same: sportiness! While he did add that the displacement is the same as that of the Hypermotard 939 (which gets a 937 cc Testastretta engine), the engine is 80 per cent new.

There will be two versions of the bike, one the standard Supersport and the other Supersport S (showcased above) which gets Ohlins suspension and a removable rear seat cowl.

Expect the bike to be officially revealed in November at EICMA.