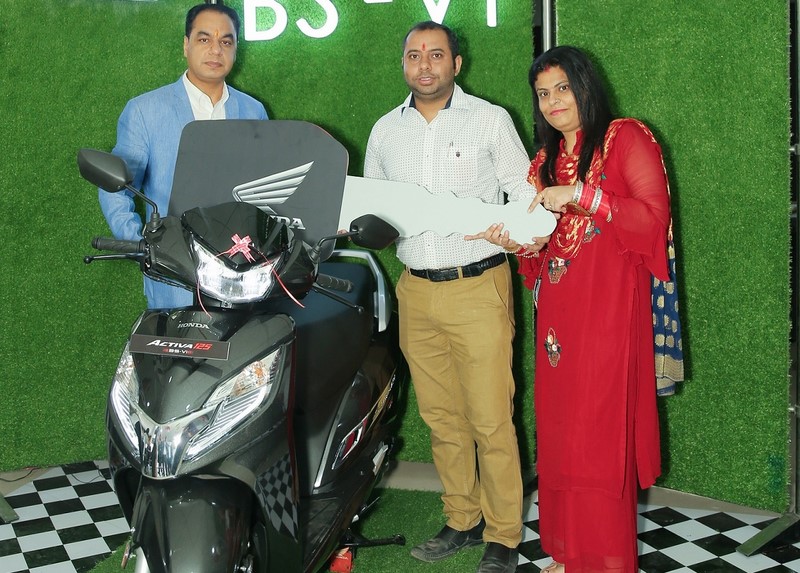 Activa 125 FI deliveries have started shortly after its official launch. The scoot will soon be available across all cities of India…

In this game of one-upmanship, Honda finally walked away with the crown of being the first one to actually launch a mass market Bharat Stage VI compliant two-wheeler in India. It must be remembered that Hero tried to outsmart Honda by abruptly announcing that it has received the BSVI certification first (for its Splendor iSmart) by shooting a press release just when Honda rolled out invites for the unveil of Activa FI in June this year. However, as we stand today, Splendor iSmart BSVI is yet to be officially launched in the market.

Nonetheless, shortly after revealing its prices in September, Honda has commenced deliveries of the ‘green’ scooter. Honda informs that Mr Ankur Arora became the first customer of the BSVI scoot in Delhi. This occasion was celebrated by the handover of keys to Mr Arora by Mr Yadvinder Singh Guleria, Vice President – Sales and marketing of HMSI.

Ankur Arora has bought the deluxe variant of the scooter and already has one Activa 3G in the family. He says that the positive ownership experience is what pushed him to get another Activa.

Activa 125 FI comes with 26 new patent applications, silent start, new instrument cluster and a side stand indicator. It also became the first Honda to offer optional six year warranty package and feature an external fuel lid. We have discussed the impressive features of the scooter in this story.

It is offered in three different variants with prices ranging from Rs 67,490 to Rs 74,490 ex-showroom Delhi.