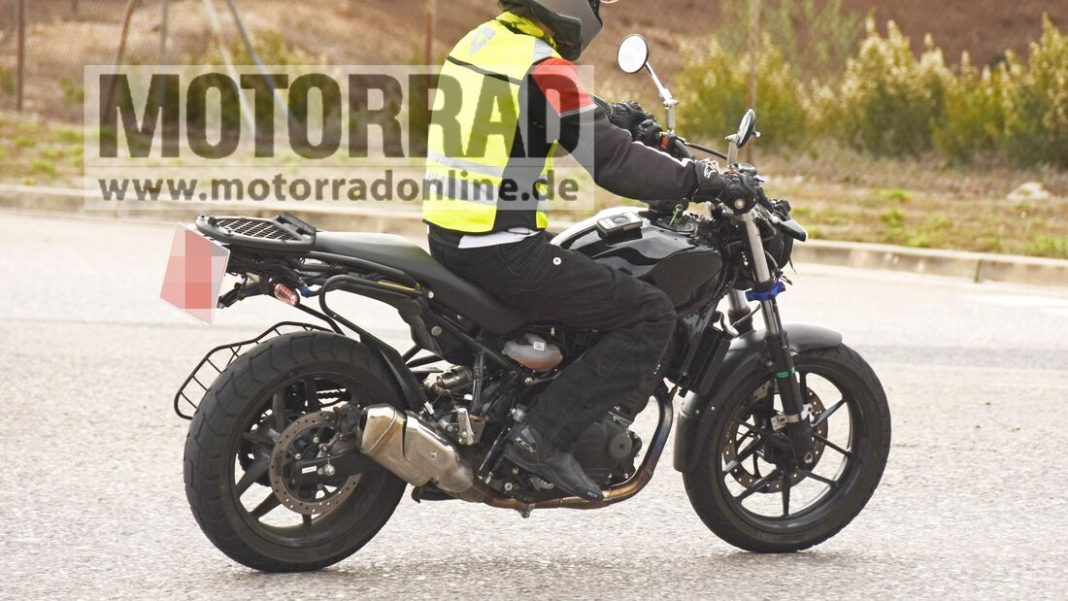 Bigger, more powerful, liquid cooled Hunter 450 spy pics or some other motorcycle? Nonetheless something like this from RE is coming…

It is no more a secret that Royal Enfield is developing a new mid-size platform that will sit between its existing single cylinder 350 and dual cylinder 650cc and no we are not talking about the older Himalayan’s 410 platform. Though it hasn’t been officially verified but heavy speculations suggest that it will have a displacement of 450cc and will carry a single cylinder engine.

The first motorcycle that was spotted bearing this engine was the Himalayan and in a latest update, we have new spy pics of a naked roadster styled Royal Enfield that could be called as the Hunter 450 or something else.

As you may have read on a few portals, this does not appear to be a scrambler and hence may not get the Scram name at all.

There is a clean design that runs on what look like 17 inch alloys wheels, suspended on conventional telescopic forks. There are minimalistic body panels resting on a frame that looks to have a big wheelbase. The classic appeal is further accentuated by that round headlamp that gets LEDs inside. There is a monoshock at the rear and a short, stubby flowing exhaust can that, hopefully, will sound nice.

As for the most important part – the engine – it will be a liquid cooled motor that is speculated to be modern (quite unlike RE!) and may churn outputs of 40 bhp and 45 Nm.

There is not a lot known about Royal Enfield’s intentions regarding this platform but it appears that products based on it may start coming from next year onwards.