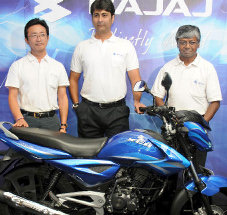 The first batch of the bike will be rolled out from its Aurangabad plant in Maharashtra, while the subsequent production will take place at the Pantnagar facility in Uttarakhand. Launching the bike, Bajaj Auto Managing Director Rajiv Bajaj said the company planned to export the new bike from April. It plans to sell 20,000 units of the new bike a month. The company also plans to introduce sports bike Kawasaki Ninja by mid-2009, which would be priced over Rs. 2 lakh. It is also proposing to launch motorcycles from Austrian bike maker KTM, in which Bajaj Auto has over 25 per cent stake.

Ramnath Subbu writes from Mumbai: While the premium end of the motorcycle market was witnessing low growth and the entry level bike segment was seeing declining growth, the mid-size bike segment had been seeing good growth. “In times of a downturn, customers tend to consolidate their choice in the middle level,” Amit Nandi, General Manager, Marketing, said.