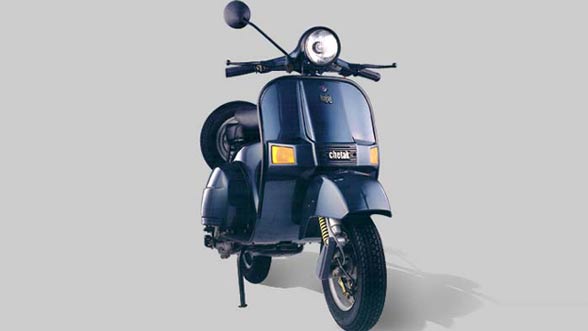 Bajaj Auto took the two-wheeler industry with surprise when they shut down the very basis of their existence – scooters, and started focusing entirely on motorcycles. The going has been interestingly good when they almost touched Hero many years back, however, with Honda splitting with Hero and TVS getting aggressive, Bajaj has suffered big time, directly in terms of volumes, in the domestic market.

It doesn’t need analysts to point out the lack of scooters in their portfolio as one of the reasons of their downfall. However, Rajiv Bajaj has always been adamant that they would want to be profitable and has, time and again, said ‘No’ to scooters. But now, it appears that, the chief is finally considering moving into scooters according to Autocar India and what better way to do it, than to bring back the legendary Chetak brand in a modern avatar.

The name Chetak needs no introduction to the Indian two-wheeler aficionados. Started way back in 1972, the Bajaj Chetak was the vehicle of choice for millions of Indian and was literally the backbone of ‘Humara Bajaj’. If Royal Enfield capitalises heritage with the Bullet, Bajaj does that with the Chetak!

The new Chetak, though, will have to see many technological advances to be able to compete with today’s technically supreme scooters. Apart from a 4 stroke mill, the scooter will most probably have an automatic transmission. But it will be interesting to see what engine displacement will Bajaj’s Chetak use, considering that the old 2 stroke 150cc engines were actually ‘fun’ to ride and the current scooter market revolves around 100-110cc 4 stroke underpowered motors.

While there has been no official word on this yet, the very thought of getting the Chetak back will bring a stream of memories among thousands (if not lakhs) of Indians. A few comments at Autocar’s story page sum up the story. Although not certain yet but we would love to see the modern day Chetak being unveiled at the Auto Expo next year!