If you can rewind and go a few years behind, Bajaj launched exclusive Pro – Biking outlets to sell its high displacement bikes specifically. The launch of Ninjas into the Indian market prompted Bajaj Auto to take this step at that point of time. However, there was a common complaint there that bikes were never offered for test rides and the way customers were handled were also not so great. Now, let’s come to the present. The news here is that Bajaj will be soon replacing all its pro – biking showrooms which have been its strength for quite some time in taping the Indian market. 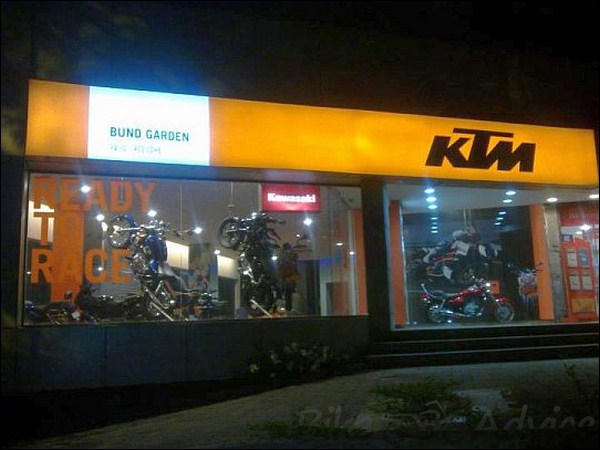 Bajaj launched the first product from KTM – The KTM Duke 200 which is its strategic partner from Austria over which the Indian company holds around a massive 40 per cent share. The entire range of Pro – Biking showrooms will now be branded as KTM stores. I can hear your question about the selling of Ninjas here. Yes, both the models of Ninja – Ninja 250R and the 650R will be put to sale through the KTM store form now on.

The Pro – Biking showrooms came live since the year 2003 and has been actively doing its part of selling the Pulsar 220, Pulsar 200 (which is no more produced) and other bikes for the past 8 years in a row. We will continue to distribute the Ninjas. When we first invested in Pro – biking in 2003, we knew that one day we would need exclusive distribution for the premium market,” Mr Rajiv Bajaj, Bajaj Auto’s Managing Director said.

He then added to his statement, “At that time, we had no idea what that brand would be. What Pulsar was 10 years back, KTM is today.”

KTM store becomes a necessity for the company to sell more of its products in the future. For instance, there are high chances of Bajaj to launch the Duke 350 in less than a year’s time according to the industry speculations.

KTM may also soon sell top-end Bajaj models, such as the Pulsar range, through its outlets in Europe and a few emerging markets. Exports for KTM already started in 2011.

“We’re looking to sell Bajaj models through our dealers – this could happen in about two years. Europe is though not a market for the cheaper models,” Mr. Stefan Pierer, the CEO of KTM-Sportmotorcycles AG said.

Bajaj’s stake in KTM not only enhances better sales for the company but also allows it to make use of KTM technology for its own products. The next generation pulsar which is due for launch on 30th of this month will prove this point.

Business Line has quoted, ‘KTM plans to make most of its smaller displacement bikes at Bajaj’s Chakan plant, while its bigger bikes will be made at its plant in Austria. With an annual capacity of 30,000 units at Chakan for KTM, two models are being manufactured at present – the Duke 200 and 125.’

KTM makes use of Bajaj’s plant in Chakan to manufacture and export its Duke 125 to the European market. Last year (2011), KTM exported 11,000 units to markets like Europe and America from India. This is expected to touch 1.5 lakh units in three years, Mr Pierer said.

In India, the company expects to sell 2,000 units a month and thereby converting India as its biggest market by the year 2013, overtaking the US. Last year, KTM managed to sell over 81,000 units across the globe as part of its international presence.