In order to keep the sales charts ticking, Bajaj Auto has relaunched the 125cc Platina. As we unearth the various details, we must frankly tell you that we are a little puzzled as well as slightly skeptic about this bike doing it for Bajaj. When this bike was stopped a few days back, we thought it is over for this bike but Bajaj had different plans in mind. Nonetheless, read on as we try to find out what is it that Bajaj has tried to en cash with this latest offering. 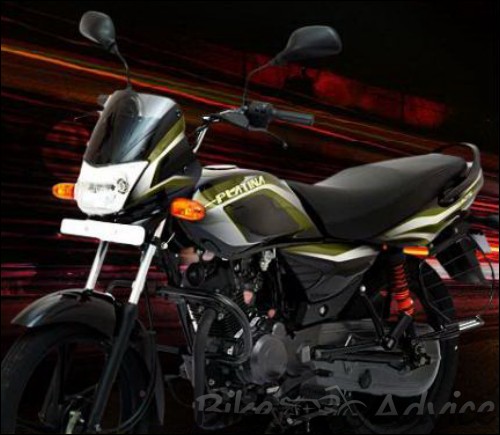 WHAT, WHY & HOW? Talking about the engine bits, it is powered by the same 125cc single spark engine which now produces maximum power output of 8.5Ps and maximum torque of 10Nm which peak at 7k and 4k respectively. It must be noted that the earlier version produced 9.53Ps of power output (@7k) and 10.85Nm of peak torque at 5000 rpm which means both power and torque have gone down by almost 1 unit each which makes the newer model the least powered bike in its segment.

On the better half of things, this new iteration is mated with a 5 speed gearbox in contrast to the 4 speed tyranny of the earlier version. Weight has also gone down by 3 kilograms which makes this bike tip at 110 kilograms (with the Electric starter) at the weighing scale. Now how many of us actually read between the lines here..? 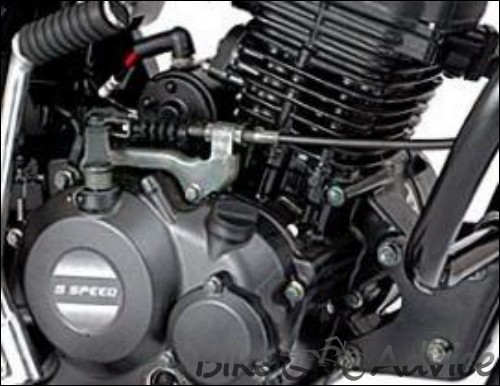 To demystify what ‘lines’ are we hinting at, let us tell you that everything talks only one language now, Mileage! With an extra gear to make relax the engine which goes along with a lower power band to mate the 5 speed gearbox and lower power/ torque figures make it clearly evident that Bajaj wanted to extract as much of an efficiency as possible from this puny mill. We expect this bike to be at least 5-6 kmpl more fuel efficient than its earlier predecessor which is a huge gain considering the fact that it essentially is the same engine.

VITAL STATISTICS: The front suspension of the bike is hydraulic telescopic type with a maximum travel of 125mm whereas the rear is loaded with Bajajs ‘SNS’ suspension which can travel 100mm max. Both the tires come equipped with drum brakes each 110mm in size. One good thing about Bajaj is that they never go low on tire profiles (their bikes need them the most is another story though!).

This bike comes loaded with black colored aluminum alloy die cast magwheels and fatter 3.0 *17 and 2.75 * 17 rubber for rear and front respectively. The fuel tank can hold upto 13 liters of fuel (which is full 5 liters more than Pulsar 135LS!). Bajaj has also kept the wheelbase at 1275mm (which is the best among all commuter 125ccs) to enhance the stability of this bike. Ground clearance stands at the regular 160mm with a reduced saddle height of 785mm (earlier versions was 790mm) to ensure that the rider feels at ease and foot-planted. 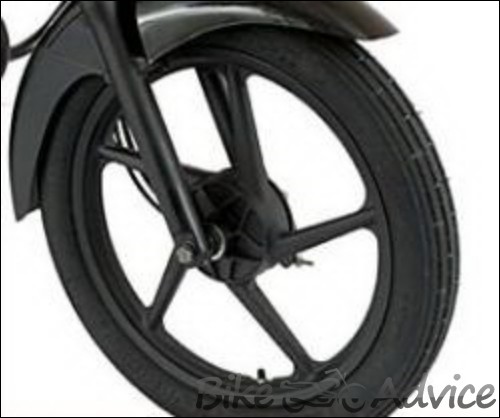 ELECTRICALS: Electricals are pretty basic with a 35 watt halogen headlamp upfront which is powered by a healthy 5Ah low maintenance battery (which is a welcome feature) which would also ensure that the battery can take the pressure of cranks even in cold mornings with lesser hassles. Electric start is standard on the bike and the bike also has a provision of kick start in case its one of those bad days for you. Another welcome feature is the ride control switch which informs the rider about the zone he is running in. According to Bajaj, this system is the safest way of keeping the rider informed whether he wants to economically cruise or power cruise as there are no visual or audible distractions involved.

One thing we like about these commuter bikes that they sport wider and comfortable seats in contrast to the hard butt smacking seats of premium bikes. Blinkers are also flexible which do not break away upon lightest of impacts. The bike borrows the same black theme from its predecessor. You can have the option of choosing from four different combo colors: Black with red decals (our choice), Black with blue decals, Black with green decals and finally Red with red decals. Also, Bajaj warrants this product for 2 years or 30k kms which is a decent enough period.

OUR ANALOGY: With the price tag as luring as (approx) Rs.39-40K (on road Delhi), this bike essentially targets the 100cc crowd from other manufacturers (read Hero Hondas). And with power figures more than them, ensures that they get lured! Bajaj has priced (and placed) this bike around the 100cc segment to entice the commuter crowd to move up to 125cc segment which promises more power and similar fuel efficiency figures without shelling out more from their pockets.

Essentially speaking, the entire commuter 125ccs from Bajaj have been targeting the same 100cc cadre but so far, Hero Hondas tight grip on that segment is unbroken and this attempt from Bajaj might, well, be an aggravated extension of the same. Nonetheless, in all this competition the customer stands benefited with better and technically advanced products at lower prices. Overall a sensible move from Bajaj and this bike is for those who want handsome mileage, good looks at lower prices and if power comes free who minds that!