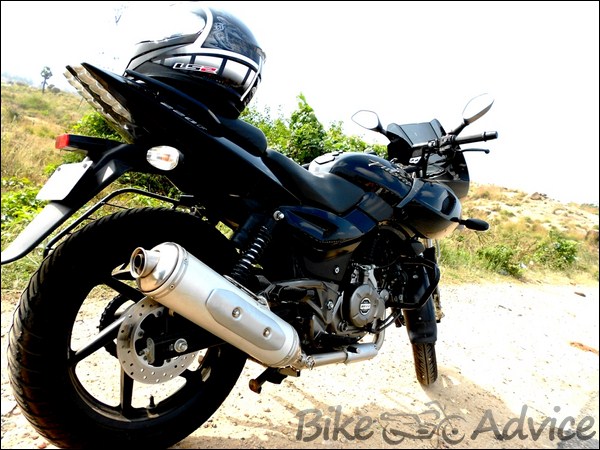 Hello everybody! I found it very interesting that lots of bikers are penning down their ownership experiences online and decided to give it a go myself. 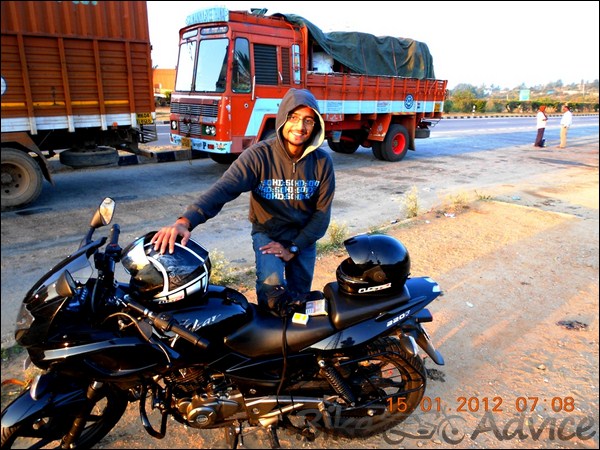 A brief outlook at my bike ownership track record – my first bike (in 7th grade) was a TVS Scooty and I learnt most of my biking on it (met with most of my accidents on it as well!). I graduated to a second-hand Pulsar 150cc in college, convincing my dad to cash in my college bus money into buying me a bike instead. Today, I own a Pulsar 220F which I have had for two years.

Passion is a small word for defining my attachment to bikes. I eat, sleep and dream about them during most of my free time, hence it is with a lot of due consideration that I buy them as well. Let’s go down the lane of my ownership experience of the 220F. Back in 2011, the 220 was Bajaj’s flagship brand and that meant you could only get one from their premium Probiking outlets.

This in itself was an experience! The sales-guys would sit with you through hour long discussions and explain every technological detail to you, you will receive an exclusive membership into the Probiking fraternity and the sales center team will assign one exclusive person to each customer who will act as the individual point-of-contact from the day a customer buys the bike to its third free service!

Must say, this attitude in itself instills a lot of buyer confidence in the 220’s customers. Bajaj would also deliver the bike to your house in a freight truck. Pretty awesome when the bike is rolled down from its delivery van onto your doorstep with the whole neighborhood looking! I don’t plan on giving the detailed description of the bike’s specifications as they are available on any bike website.

What I will do instead is highlight the areas where the bike stood out from its competition. Bear in mind that all of the below are in respect to the Indian market in 2011. There are a few bikes today that are more advanced than the 220F but that is only natural. What I plan to bring to light is why the bike was the best in its class back in its D-days (apart from few obvious imports like the Baby Ninja). 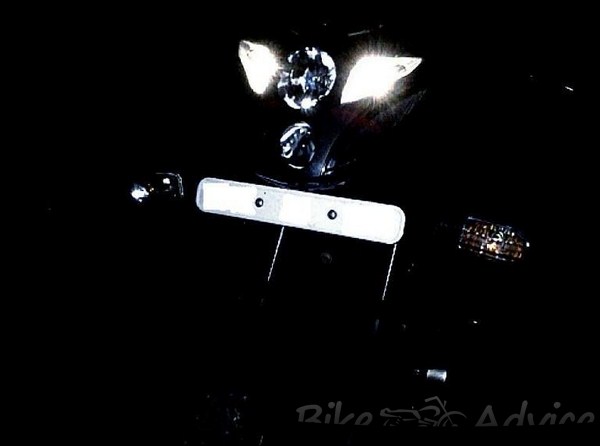 I bought this bike in 2011, so I have the carbureted version and not the fuel-injected engine. I think this was Bajaj’s way of making the bike more affordable to the masses as fuel injection, though more performance oriented, increased the price by almost 10k!

But keeping this downside in mind the engineers gave the bike the country’s biggest 32mm UCAL UCD 32 Venturi carburetor replacing the Delphi-supplied throttle body type fuel injection system loaded in the earlier Pulsar 220 DTS-Fi. But here’s the interesting part, after introducing the carburetor, Bajaj was still able to churn out an immense 21.04 PS of power from the bike as compared to the earlier 20 PS at the same RPM ranges! 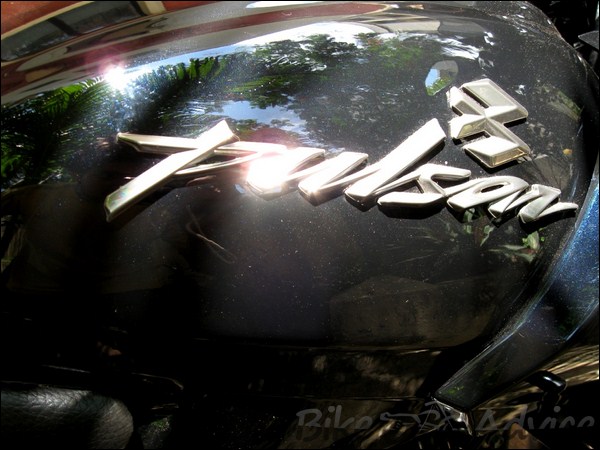 Remember, this was in 2011, when Indian bikes were struggling to reach the 20PS+ benchmark. Alongside this, the bike maintains a torque of 19.12 Nm which is the same as the earlier version but it is achieved at a higher rpm of 7000 which is close to 500rpm more than the earlier.

Due to this the bike is pretty revvy with more than enough torque available to the rider all through the rpm curve. Let me give an example, the bike (remember it is 220cc) can pull at 25-30km/hr in 4th gear with very less vibrations! Including a carburetor also meant introducing a catalytic convertor and this ensured that the bike was green (as per Bharat Stage 4 Pollution Norms). 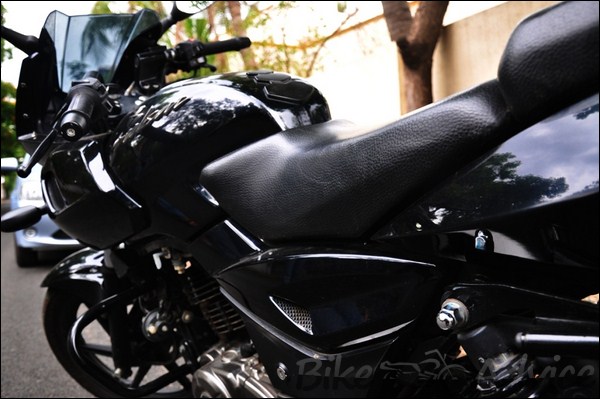 The bike also had a bigger than before air cooler which ensured that the bike remains cool most of the time. Although, from experience, I know that the bike does heat up after riding at a stretch for more than 5 hours. Which bike doesn’t though? Bajaj’s most insistent and consistent problem with the Pulsar line as everyone who owns one will know used to be its gearbox and clutch assembly.

Clutch slipping, wear-tear and non-responsiveness had plagued the Pulsar gear factory for way too long. I know this from experience as well, because I owned a Pulsar before the 220. With the 220F, Bajaj overhauled the entire gear work, giving it a clutch setup supplied by FCC Riko and the result was the smoothest gearbox till date. I have been riding the bike for a while now and have absolutely no complains about the gears.

The engine has an oval shaped combustion chamber which helps in maximizing the density of the charge during flame travel which translates to high degree combustion even when surrounding air mixture is lean (meaning less oxygen in air). The piston now was made up of a new screen printed graphite based Malycote material which assists in reducing overall friction with cylinder wall and also prevents the engine from seizing under abnormal ride conditions.

Apart from these, Bajaj had provided the bike with an auto choke to avoid stalling in cold temperatures (sports bikes don’t have a kick starters) and an all-new ignition setup which includes sensors built into the cylinder head to reduce torque loss and flat spots during a ride. The tires are compound and tubeless, helping the bike in being planted and stable during sudden braking.

In the looks front, Bajaj rules the roost. I bought the all black version and when I say all black, I mean all is Black! Body, engine casing, tires, swing arm, forks, alloys and seats are all black with the gearbox alone plated in a shade of gold to give it a slight distinction. The headlight consists of a four part assembly, one projector, one high beam and two pilots.

Apart from this, it has the regular snazzy stuff like backlit switches and an uber cool display console. These along with its mammoth rear tires and semi-fairing make the bike a killer in terms of street presence. The bike also comes with self-cancelling indicators and beam idling after engine is killed (a feature that helps me find my way in the dark after having killed the engine).

When I bought the bike, it was priced at 79k ex-showroom and 90k on-road. A lot more bang for buck than the R15 which in my view is grossly overpriced and overstated for a 150cc (it is a nice bike in terms of ride technology though). The mileage, an Indian bike buyer’s beacon, is not bad in the 220. It gives decent 30-32 kmpl in the city and around 37-40 kmpl on highways.

My riding includes 60% city and 40% highway cruising. In the city, the bike is pretty tame. It can be kept within low revs and used for quick overtakes if needed. Size is not an issue (unlike the Karizma, which is the king of bulk!) as it is only a semi-faired bike. The headlights are very powerful and can confuse you into thinking its daytime at night! Overall the city ride experience is pretty satisfactory. 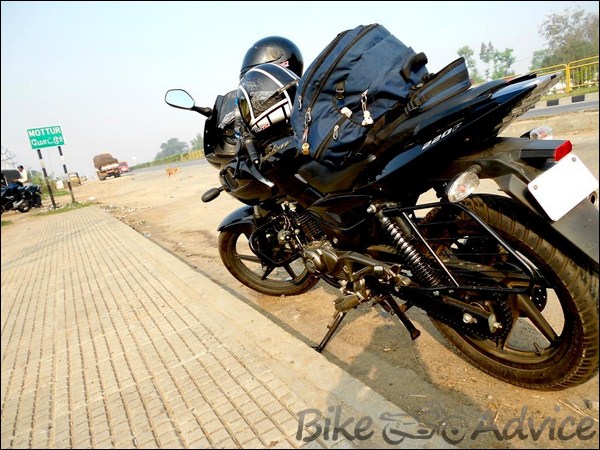 The real beauty of the Fastest Indian (so it was called at one time) comes to light when it is taken out on the NHAI roads! If I was asked to summarize this bike, I would say that it was built for the highway. The engine comes to life and all 21 horses are unleashed from wherever they are kept hidden while riding in the city.

There is nothing that can give you a sensation close to riding this machine on a straight road. The engine throbs, the exhaust rumbles and the bike glides across the tarmac as if the highways were laid keeping this bike in mind and not the other way around. The throttle is extremely responsive and can blast you into infinity at a moment’s notice and bring you back to reality thanks to its Bybre brakes (Bybre is the Indian unit of Brembo, one of the world’s leading manufactures in brake technology).

I have personally touched 143 kmph on Chennai-Bangalore while riding solo and 124 kmph while riding twin. This does not mean the bike starts complaining when pushed outside its comfort zone. It can cruise at a steady 100 and only starts grunting only after the 120’s. This is quite a feat for a single cylinder, carbureted, SOHC engine.

The seats are split and wide so no problems with the backbone and bottom, for both the rider and the pillion. Also, I can slide into the seat when travelling at speed and sit upright when cruising, without any difficulty. Overall I give the 220F a 10/10 for highways satisfaction!

Every man has his flaws and so does every bike. In the 220 Pulsar there are a few as well. It is not as smooth during cornering as the manufacturer states, with me having to sometimes push the bike into turns. I have ridden almost all the available bikes in the market because I have a large biking group and can say that the R15, FZs, Fazers and CBRs are far ahead of the 220 in terms of cornering capability. 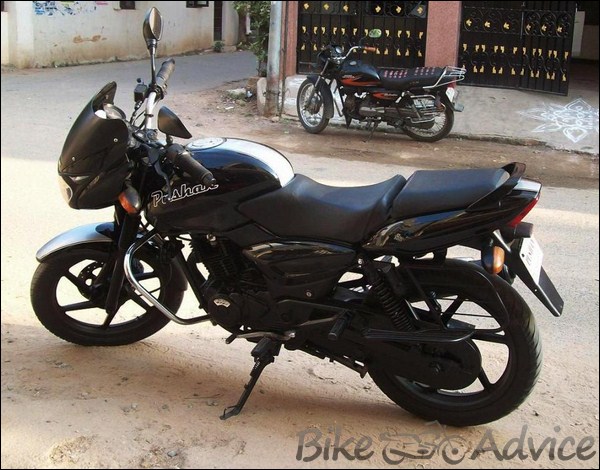 The center stand is set very low and any average bump will scrape it. The rear view mirrors are set too low, are too small and shake way too much to be of any great use. This can be really annoying and hazardous especially in India where wrong side overtakes are a sub-culture.

The rear brakes, although overhauled in the latest version, needs convincing for it to have a substantial effect. Else, it will relax and let the front disc do the job which is quite dangerous during shock braking (the bike has no ABS). The after sales service provided by Probiking can be summed up in one word, “SH*T”. They screwed almost everything in the 1st two free services.

From the idling, to the engine noise there was always something wrong when I was handed back the bike each time. The worst part is that the mechanics that they have employed are a bunch of goofs who will steal anything that is left behind while giving it for servicing.

They have stolen half a tank of petrol, numerous soft cloths (not the 10rs ones. I buy them for 50rs each) and for some reason even my number plate light bulb?! After the 1st few experiences I discarded them and shifted to a private franchisee which has a tie-up with Bajaj. I used to get my 150 serviced by them and am pretty satisfied with their work.

I have also had a couple of major issues in the initial ownership phases of the bike. After 5.5k kms the bike’s rocker arm got damaged and after 6.5k the camshaft cover came loose causing a major oil spill on one of my highway rides. Both of these had to be replaced but were done for free as the bike was still under warranty cover.

This bike is a testament to how far Indian bike makers have come in terms of technological and overall advancement. This bike has been shipped to nearby places such as like Sri Lanka and far off destinations like Columbia and has made its mark everywhere it has landed. 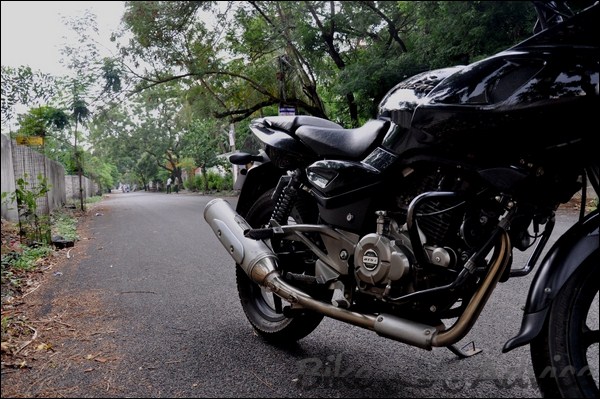 It acted as the front runner for setting the pace for both local and international bike manufacturers and giving them a taste of how much the average Indian biker and his bike have evolved. As an ardent biker I would say that this bike has given me feel of what it is like to be an actual bike junkie and has had me fall in love every time I have hit the ignition.