Hi guys, my name is Vishnu and a proud owner of Bajaj Pulsar 220 DTSi, the naked street version. Purchased the bike on October 21st, 2010 and have done 524 kms on the ODO as of now. The maximum speed that i’ve attained effortlessly is 122Kmph and here goes my review. 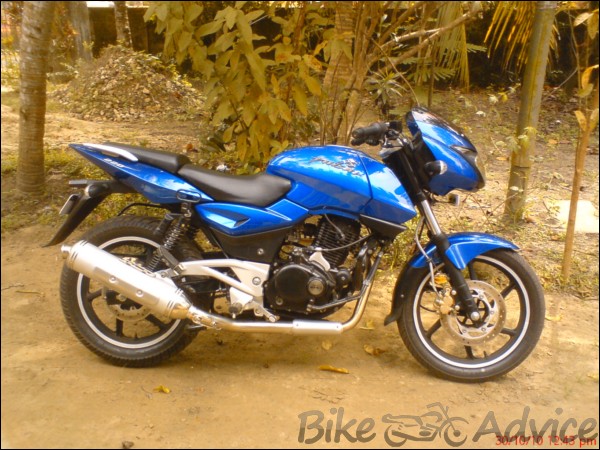 My Views on my Pulsar 220: Engine feels very smooth. Engine feel is similar to Zma. The 21bhp figure although doesn’t ‘feel’ so much initially, its real power is felt above the 80’s. Thanks to the 19nm Torque. Not saying its initial power is bad, just emphasizing about the high end power. Just compared it to RTR and felt it doesn’t ‘jump’ initially like that. The reason behind it is the bikes weight. Mileage of ~40 is a blessing and pretty sure to get 45-50 on highways. I couldn’t say a single complaint to the service personal while going in for 1st Service! That was a huge plus bcoz my first Pulsar 150 wasn’t quite like that. Headlights have been very impressive till now. You put on the high beam and without doubt a ‘hesitant’ driver coming in your opposite direction will dim his lights! I ride in what you call the “bumper-to-bumper” traffic atleast 60% of my daily drive, so I guess the alternator and charging system are perfect with the all new DC system. Horn is a semi-let down. On highways at high speeds while overtaking trucks this horn could be a let down but for the city use its just fine.

Riding posture: very similar to Hero Honda Karizma again. No back ache, no wrist or fore arm pain. I said this because I had that bitter experience with R15 when I took test drive for a mere 8kms. Pulsar 220 stance is sporty and we feel very confident while braking.

Suspension: The suspensions are better than normal Pulsars. Does reasonably well over minors potholes and bumps. The swing arm is brilliant. But once u dive into a conventionally large pothole in the road, your back could take a beating. I’ve also heard that Yamaha R15 is better in this regard. Pulsar 220 lands into huge potholes with a thud sound.

Tyres: The stock tyre and the grip it offers are amazing. Wide and softcompound combination is really wonderful. Had to undergo harsh braking for a couple of times, everything was perfect and actually the performance was quite unlike the older pulsars. No vibes felt till now. Nor from the body neither from the fairings or anywhere. Some say build quality is bad, which i just wonder why.

Brakes: Rear disc brakes have improved the overall braking feature. I used to often envy the Dazzler’s rear brakes. But now with the rear disc that problem is solved! Both disc brakes work reall well. Being heavy has an advantage. Has in fact more advantages than drawbacks. 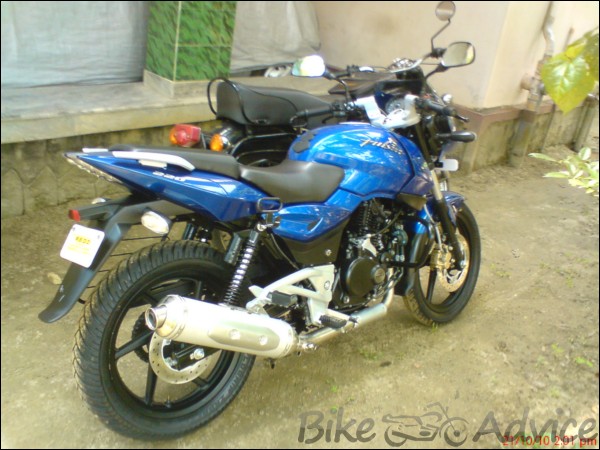 Pulsar 220 at 152 kgs is cool which makes the bike feel planted in the road always. On highways a 120kg R15 in comparison looks funny, although its design makes up for it. But any day Bullet owners will agree that weight is a big factor for handling. It handles quite well in city too with this weight though but may be not as much as our old Pulsar 180 or the new RTR. But straight line stability of P220 DTSi is simply unbeatable. Gearbox has been very slick. No false neutrals or slips. Everything slots in well.

My verdict: Pulsar 220 DTSi was a value for money for me. The goodies Bajaj offers are just amazing. Bajaj is constantly improving the needs of the customers and applying it in their bikes. Bajaj engine some say might be a let down later, who cares?Who wants to ride a two wheeler for more than 5 yrs or 40000kms? My mindset is to change a bike every 5yrs bcoz designs change, technology changes then why not change the bike?

So if you say Honda engine can run for 1 lakh kms, who wants so much? About maintenance, Bajaj has been troublesome for a few. But there are indeed quite a few who have found Pulsars to be very solid and maintenance free. I have used P150 for 5yrs and I have spent 4k per year on an avg which incl 3 accident repairs. 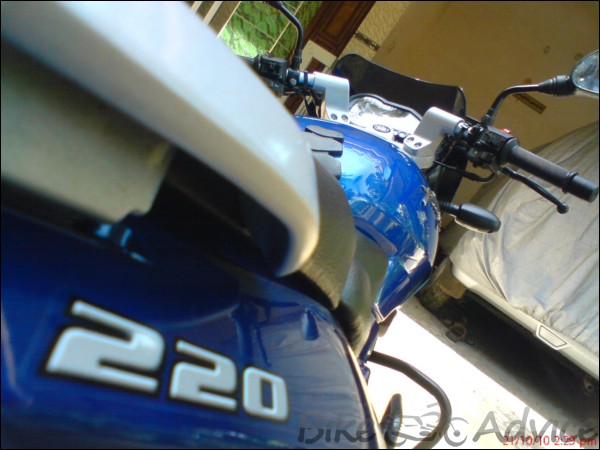 I was happy with it otherwise why would I again invest my hard earned money again on a Bajaj bike? and remember in between I did take a new Standard Bullet and had to sell it off in 3 months for this new Pulsar 220. But thank god better late than never, I took a new P220 DTSi.

Yamaha’s also claims of beating Pulsar 220, Fastest Indian I think it is false because any bike can be modified to improve performance. The way the bike behaves in stock condition is what should be taken for the sake of general comparison. and that too their kit is around Rs.30,000. Pulsar 220 is designed to be powerful as well as fuel efficient. Once you don’t want fuel efficiency do something on the engine and Iam sure it can take on a modded R15 and make it eat dust.