It was the Pulsar-Mania ad, and the The Fastest Indian ad that ignited the fire inside me, that unbearable urge to own that gorgeous beast. And that beast was in my hand on 08/09/10. This is the ownership review of my Black Beauty, my Pulsar 220F, looks damn sexy, right? 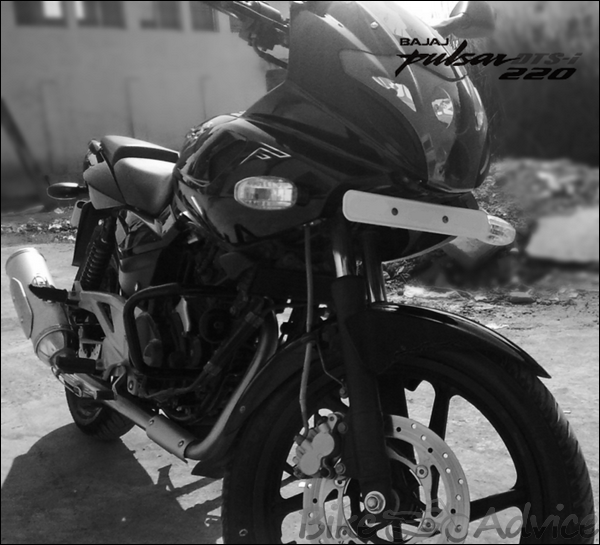 Its semi fairing bike with projector lamp for low beam with 55w bulbs. Its got whitish light not bluish light. Trust me, its the best stock lights one can get. The high beam is slightly inclined left to reduced glare to on coming traffic. The fairing has vibration issues, but one can live with it, its not VERY irritating, also one can get their fairing packed at PBK, to reduce it.

But serious flaw recently came up with the high beam, the plastic shield over the high beam gets a SCRATCH kinda texture from inside, and its caused by excessive heat developed by the high beam bulb, as the bulb is closer to the shield, hence the effect is mostly seen in the high beam area.

Its has got that classic ORANGE back-light, only difference to P150’s and P180’s and P220’s digital console, is that of the tachometer is the background. It is one of the neatly designed console I came across after R15. The tachometer is in left side as compared to that on right on R15 and RTR 180.

It has got the smoothest buttons, every single button is very smooth, it adds that little extra comfort to your fingers. Its interesting that the kill switch operates in a opposite way as done by that of a R15, FZ, RTR. You have to flip up to turn engine on and flip down to kill the engine. 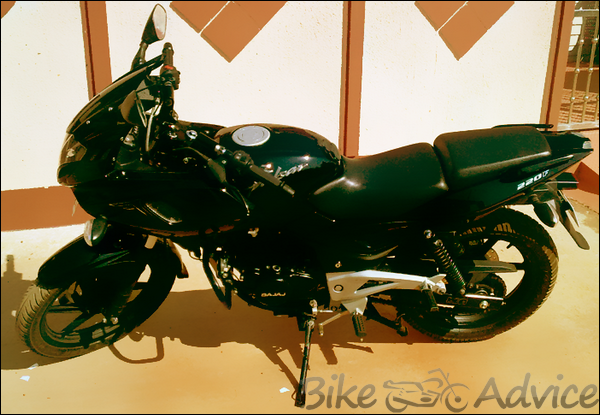 Its feature good old clip ons, which are very comfortable to ride with, however the disadvantage is that you cannot adjust them. And these clipons are different from that of UG 4.5 P150.

They are shaky, small, foldable, cute and adds beauty to overall look of the bike, but are not very useful. 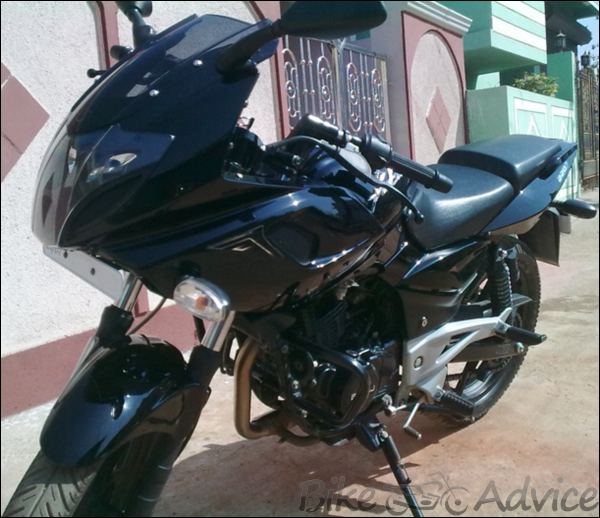 I find it less sporty as compared to R15 and Apache, but it is sporty but not very sporty. And the seat height is little bit high as compared to other bikes.

Its the best looking exhaust, and the roar is not as bassy as compared to Apache or Bullet, but it is bassy, and you’ll definitely fell in love with it.

I wont get into its dimension, and let me tell you, front disc is the best disc brake one can get. I wont be able to say the same about the rear ones, according to Bajaj, they have deliberately kept rear disc less effective to prevent locking of rear wheels. The extra bit of front disc neutralizes the lack of braking capacity of rear ones. New batch comes with Bybre disc brakes, it looks more sophisticate, but has almost equal braking capability as of previous brakes.

One can get iRC and MRF zappers with it. Irc is more soft compound and has a round profile and hence looks less broader than mrf. But there’s also weird combo that I’ve came across, the front comes wth irc and rear with mrf. 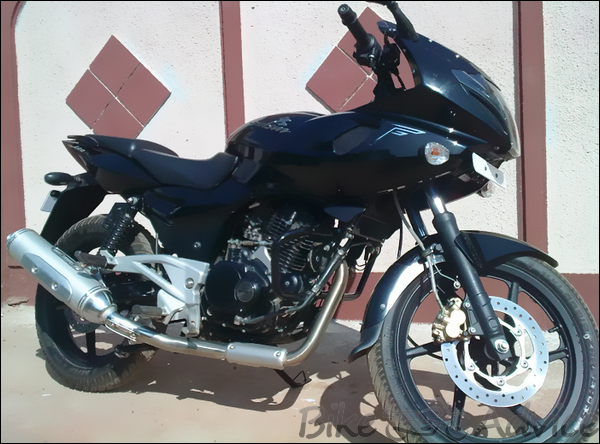 Probably the most important thing of this bike. I won’t get into the specs, you must get a ride it to feel the meaty power of this beast. And trust me it will blow your mind. P220 Fi, has more low and mid end torque, but its the top end that this carb version does the best. The top speed of this bike in complete stock conditions is around 155kmph on speedometer, and around 145kmph actual. Engine is not butter smooth at low speeds, but its the top end which will make you feel like god.

Rear gets no facelift what so ever. You can barely distinguish it from P150 and P180 if you don’t look at the silencer and tires.

This bike has the best gear box of all the Bajaj bikes. But one may find difficulty finding neutral with the engine running. Its not the most smoothest gear box one can get, but its not disappointing and irritating.

Its not as flickable as an Apache, neither its not too bulky for city traffic, one can easily cut through traffic, but real fun starts at straight roads, take it to highway, to reveal its true nature.It is rock stable at high speeds, thanks to wide tires and aerodynamic design. And this beast not only perform but also yields awesome mileage for 32-37 kmpl.

I had R15 along with P220 on my wish list, but went for 220 mostly because of the budget, now when I look at R15 I ask myself, I should have waited more for R15, I should have convinced my dad more.

But when I sit in P220 and twist that throttle, thats when all the R15 thoughts vanishes, and a big smile grows on my face. 🙂