Hello bikers, firstly I would like to introduce myself. I’m Partha Sarathy from Visakhapatnam; I’m a guy of 21 years of age and has completed my graduation. Actually you can turn the caption of Visakhapatnam from “City Of Destiny” to “City For The Bikers” as you guys can find a lot of roads similar to race tracks. For example, BRTS roads and the roads along the coastal line. 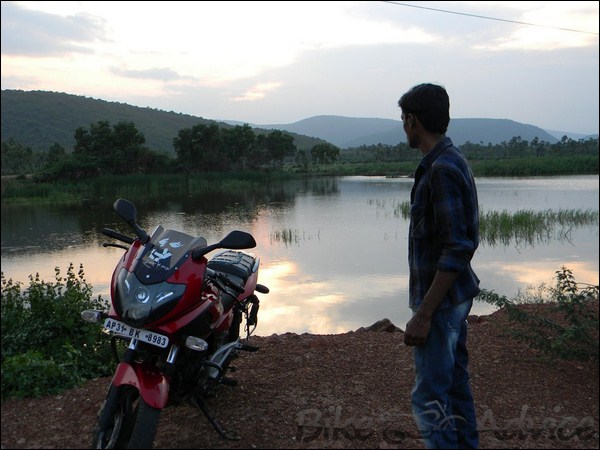 These are the roads which are almost free from traffic. They seem like they are meant for the bikers to test their bikes power in fact I too do the same. Without taking much of your time, let’s move into the story. When I was in 8th I have a friend who is fond of bikes and cars he always talks about all the new launches of bikes and cars.

So when you have a guy like this beside you then how can you prevent yourself from not being focused on these stuff so called the heart of the teenagers. The same thing happened with me slowly I’ve turned onto the bikes. It was the year when the new Bajaj Pulsar 150 DTS-I (fox eyes) was launched, I was very much in love with it. At that time we use to find the HH Karizma but it didn’t attract me too much.

Later after almost 2 year I saw the new Pulsar 200 DTS-I with the sporty split seat, beautiful exhaust and the split grab rails. Oh god it was one of the sexiest bikes I’ve ever seen on the roads of Vizag. I was in love with that bike at the first sight. From that very moment I’ve became a hardcore fan of Bajaj which finally led me to learn how to ride a bike. My father owns HH Splendour NXG so it became a specimen in my hands for practicing. 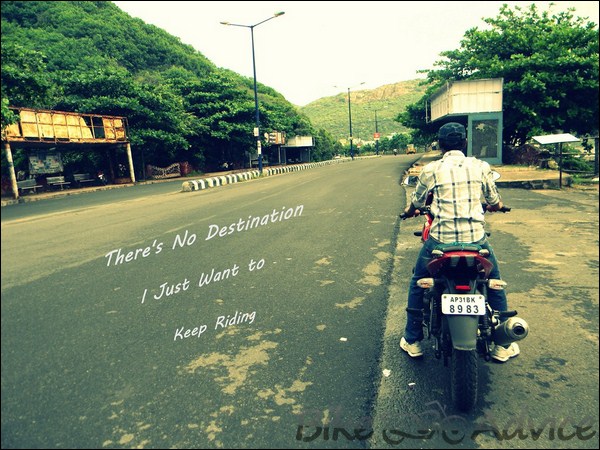 Now comes the hardest time in the life of every college going student. I’ve entered into the graduation level and I’ve been grown up watching my seniors having races on the roads in front of the college they might be trying to impress the girls but those races have impressed me a lot and the rider in me woke up and forced me to ask my dad to buy a bike for me.

One and half year passed and finally my dad agreed to buy it. Here comes the real tough situation, my parents asked me about the bike I’m looking for and without any hesitation “Bajaj Pulsar 220F” is the word that just rolled out from my mouth, on hearing this my parents took a pause and made them to re-check their decision. 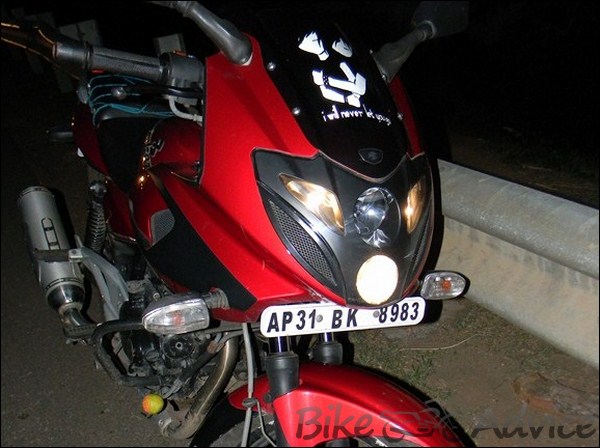 The reason is that I’m just 45kgs and my height is 5’6 and when you compare these figures with that of the bike’s either with the weight of the bike or power it doesn’t seems to sound good. After few months my proposal was accepted unexpectedly. I and my cousin went to the showroom on 1st December 2010.

To check the price details of the bike and WOW factor is that I’ve been seated on this beast for the first time to check it. Then without wasting even a single second I asked my cousin to book it and the thing is that I’ve entered into the showroom with a thought of buying the black one but finally came out with a red one. 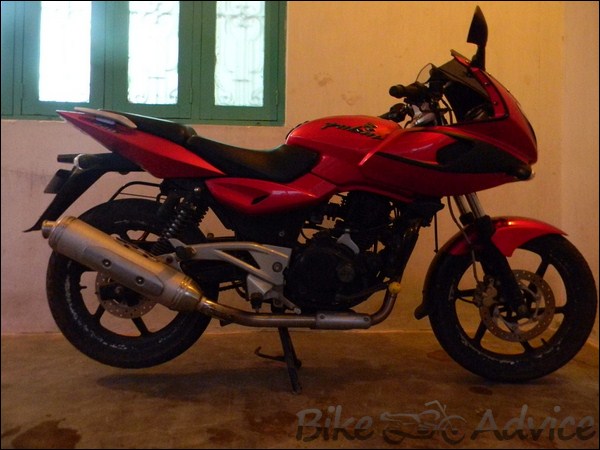 The most amazing things that I love in Bajaj Pulsar 220F are, 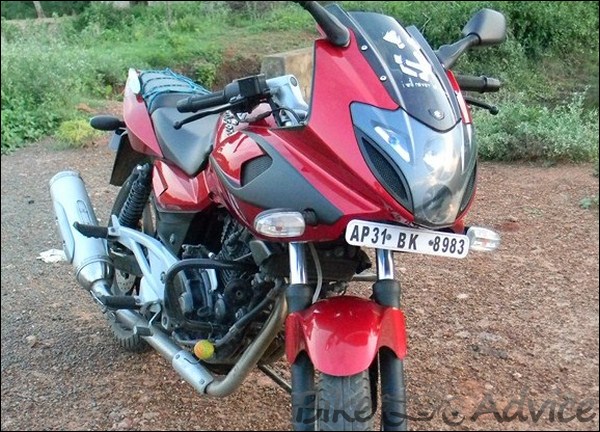 The bike is quarter faired and got some other cosmetic touch ups like split seat, bigger and beautiful exhauster, split grab rails, scratch resistance tank pad, and many more. 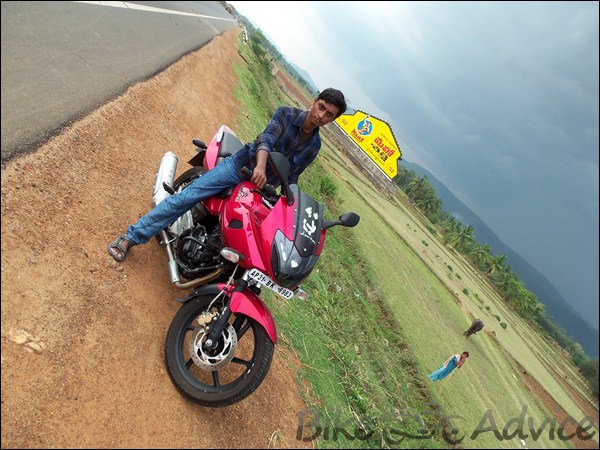 The bike is fitted with a clip on handle bars which not only gives a bit sporty feel but also confidence while cornering and while zapping through the traffic.

The gas charged nitrox suspension gives you a pleasure ride not only on the pot holes of City roads but also on the bumpy rural roads.

Indicators in the Speedo Meter 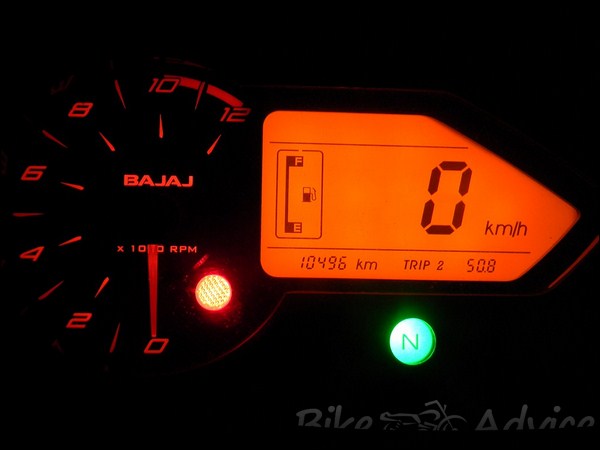 Self cancelling turn indicators, illuminating lights to indicate the switches on the handle bars, auto choke.

As I was from a orthodox family, my parents did not allow me to take it for 6 days as they were told that the time is not going good for me. All these 6 days I’ve spent by watching it. Finally the time came. Each and every second till now that I’ve spent on my bike has become the most memorable moments in my life and they are continuing.

The number of long drives is limited but each and every time I had a long drive it helped me to gain more grip on the bike. The best of my long drives are from Vizag to Annavaram (total of almost 300km up n down) and the second one is to Borra Caves (around 250 km to and fro). These two drives are extremely different from each other because one is complete high way and the other is a mixture of off-road, highway and ghat roads. 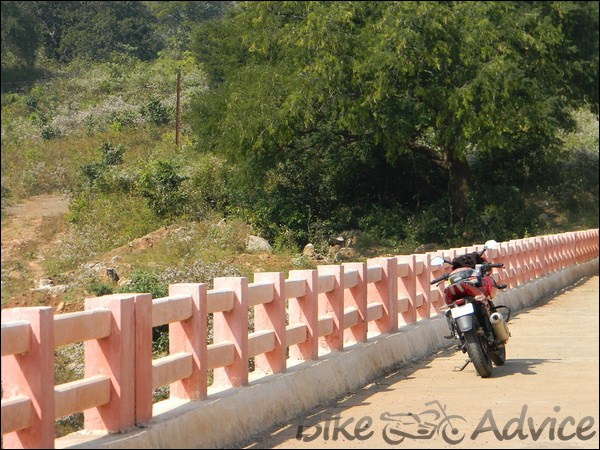 The whole journey took place on the highway only. We all together 4 members have started this journey on 2 Pulsar 220s. We almost maintained a speed above 80 km all the time even at that speeds my bike didn’t disappoint me anywhere either in terms of mileage or performance. The mileage that I got in this journey made me to go mad because it gave me a mileage of 51 KMPL. The vibration of the bike is almost negligible.

This is the most pleasant drive as the way is through the green fields of villages. This time bike gave a trouble with its centre stand as we were cornering in the ghats the centre stand kissed the road twice or thrice. And finally we reached the place where everyone stopped their bikes and started to get into jeeps at first we did not understands what’s happening later the jeep drivers came to us and said that its difficult to get to the water falls on bikes. 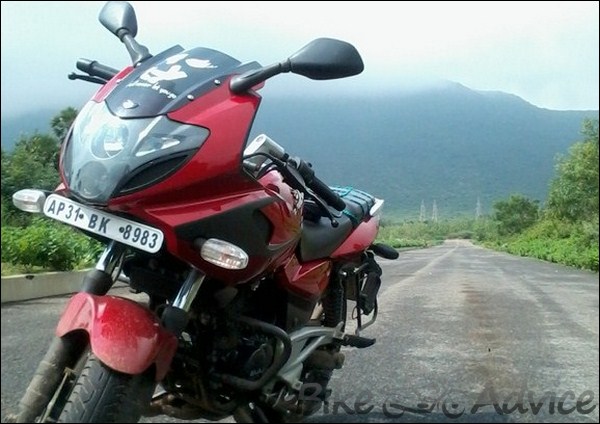 My friend told me that when jeeps are going why can’t we? Then we slowly started our journey and covered a distance of about 1 km then, we came to know that we have done a mistake because the road was filled with sand in such a way that 1/4th of the tyre was stuck in it. But the powerful engine made me to overcome the obstacle with ease.

As no machine is perfect my bike also had some tiny problems of which some are rectified and some are to be rectified. 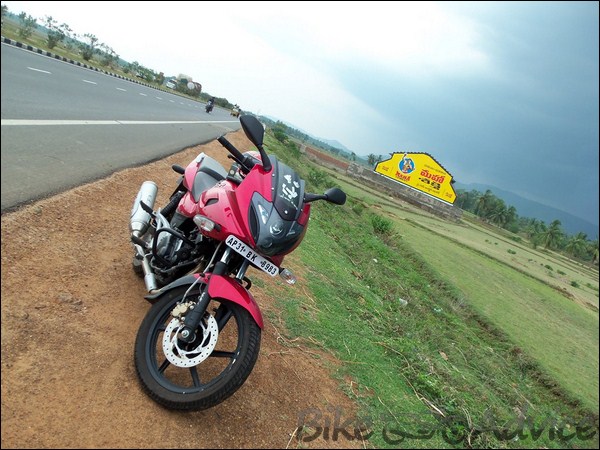 Apart from these minor issues I didn’t find any problems in my bike. This is my first contribution to BikeAdvice and I hope all the readers like this review.