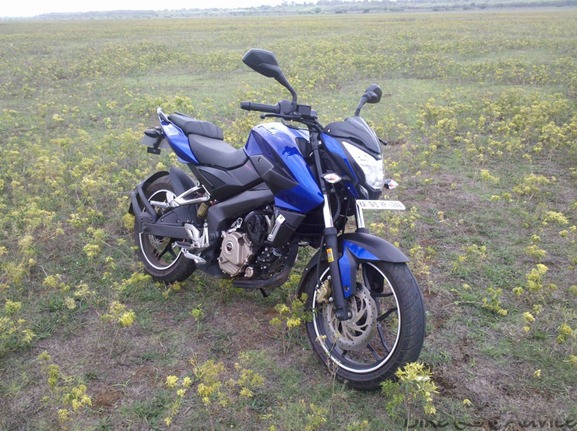 As team BikeAdvice was trying hard to get the all new Bajaj Pulsar 200NS for a test ride, we were very glad to find Mr. Akshay from Bangalore who was very happy to share across his ownership experience with the Bajaj Pulsar 200NS to us. So here is the detailed P200NS ownership interview we had with him.

Sharat:- Tell us something about yourself, your previous bikes and the biking passion you posses.

Akshay:- My biking history started humbly with my mum’s Kinetic Honda ZX, a bike that was almost as old as me. Learnt riding on that bike, and have so many memories of good times, crashes, falls and the rest! Once I completed my education I needed a bike for work commute and my parents agreed to buy me a bike on the condition that I pay them back on a monthly basis. I agreed, and that’s how I ended up buying a yellow Honda CBF Stunner 125. This is the bike that got me bitten by the biking bug. It all started with rides to the nearby Nandi Hills and went on to riding 100km to the Cauvery River. I suddenly found the Stunner to be more of a commuter than a highway cruiser, and wanted to get something better. 6 months of ownership and 17,000km on odo later, and after much research, I settled on the R15. I got 45k for the Stunner, which was the exact down payment for the R15. Exchanged the Stunner and proudly brought the Yamaha home, much to the surprise and amazement of my parents. The next 2 years were the hardest for me financially as I was paying my parents for the Stunner as well as paying an EMI for the R15. What a brilliant bike! It was everything I wanted and I ended up modding it with Race Concepts parts that made a brilliant bike even better!
ThisYammy really spoilt me with Pulsar 220 beating power and a fuel efficiency of between 40 – 52kmpl depending on riding conditions. After numerous 600km+ rides to Hyderabad, Gokarna, etc. I realized that the R15 was a bit too taxing on the body due to its stiff suspension and committed riding position. This is when the urge to change to a more comfortable bike took over. 2 years of paying EMI’s had left me without any savings and I unfortunately had to sell my beloved R15 after 2 years and 40,000km of ownership. 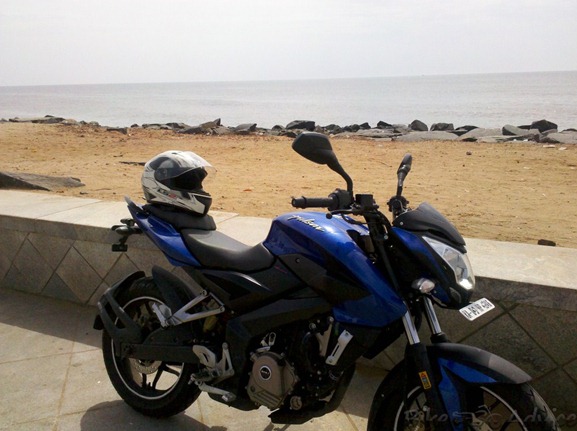 Sharat:-  Out of so many bikes in the Indian market, what motivated you to choose BAJAJ Pulsar 200NS? What other bikes did you consider buying?

Akshay:-  My eyes were on the CBR250R, with the bike being touted as a Sports-Tourer. A test-ride confirmed that it would be the perfect bike for me! Started calculating finance requirements and such, but lots of last minute issues ensured that the 250R would remain just a dream at 1,70,000 rupees! I then started thinking of the KTM Duke 200 as it seemed to be the best value-for-money proposition, and I’ve always wanted to own a naked after owning the fully-faired R15. This was again not to be as my finance scheme got rejected at the last minute.. This is when the 200NS finally launched in Bangalore and I got to see the bike in the flesh. Now, let me tell you that although I learnt riding on my cousin’s Pulsar 150 Classic way back in 2001, I wasn’t much of a Pulsar fan and actually hated the bikes for their crappy quality and myriad issues. I’d been following stories of the 200NS with grudging respect for all the good things I’d been hearing about the bike. Seeing the bike in the flesh and taking a test-ride completely convinced me that this was a great product and would suit my requirements perfectly! Paid the entire amount instantly and took delivery of my Emerald Blue Pulsar 200 NS – my Night Fury! The NS is continually amazing me with it’s handling, poise, raw power and sheer toughness.. This is THE value-for-money motorcycle for the biking enthusiast, and there’s no two ways about it.

Sharat:-  How has been your ownership experience so far? I am sure you would be the center of attraction out there on the roads.

Akshay:-  I’m still on the honeymoon phase of owning and riding a new bike, and the bike hasn’t disappointed at all! 10 days of ownership and close to 2000km on odo says it all. Surprisingly, not too many people on the road noticed the bike. I got the most number of eyeballs at traffic signals where people would be glancing around and would do a double-take on noticing the tall, beefy and good looking bike. Answered millions of questions on the price, mileage, issues, etc. The NS is so good that I’m not missing my R15 one bit! This is one bike I will NEVER sell, that’s how much it has impressed me. My next bike will be something big and I’ve started saving up already.

Sharat:-  How much did the bike cost in total and what was your waiting period experience?

Akshay:-  The bike cost me Rs. 1,00,481/- on-road, Bangalore. I had to wait for almost 20 days to get the bike. The waiting period was really hard as I’d sold the R15 and kept dreaming about riding away into the distance on the new steed. Passed time by reading review after review on the net.

Sharat:-   The old pulsars were not that great handlers, so this time is it a same story, or were you blown away with its new engineering?

Akshay:-  Like I said earlier, I wasn’t a big fan of the Pulsar’s and always considered them to be clumsy handling, un-refined, un-reliable machines. This model is a quantum leap for Bajaj and the engineering finesse really shows. I found the bike more poised and much more stable than the R15 around corners, and that really is saying something! The bike is almost vibe-free and most people will never believe that they’re riding a Bajaj product! Awesome motorcycle, definitely must ride to experience Indian engineering at it’s best.

Sharat:-   How does the bike perform in city conditions and highways?

Akshay:-  Although the bike sports a short-stroke engine design, there is surprisingly adequate torque at low and mid-range rpms! Where the R15 struggled in the city, the NS pulled away effortlessly, even with a pillion. The power delivery is VERY linear, with the power delivery progressively getting stronger with the build-up of revs. 7,000rpm onwards you start feeling a strong surge which gets truly manic from 8,000rpm all the way to the 11,000rpm redline! By mounting a Go-Pro camera on tank and taking speedo readout as the reference, the NS leapt from 0-100kmph in 9.6 seconds and went on to record a mighty 151kmph top speed!! On the speedo, the bike gets to 100kmph in the first 10 seconds, 140kmph in the next 10 and 150kmph in another 10 seconds. 0-top speed in 30 seconds now that’s fantastic performance!
The bike can putter around calmly in the city at 4,000rpm in the 6th gear. Highway cruising is best at 60-70kmpl with the bike being completely sound and vibe-free at those speeds, feeling more like a Honda Unicorn. Highest cruising speed without making the engine feel stressed is 100-110kmph. The wind-blast can really be felt on this bike post 100kmph though, but that maybe because I’m used to the awesome aerodynamics of the R15 at high speeds.

Sharat:-   There is been talks that its the same KTM 200 engine with few tweaks, What do you think about it? And how different is it with the KTM mill?

Akshay:-  The bike does share a few KTM parts, but the engineering is completely different. Yes – the bore, the exhaust, the stance all looks similar, but the bike has a completely different character altogether! The NS is much more relaxed, both in acceleration, highway cruising and seating posture. The gears are longer, the bike is much more silent and gives better fuel efficiency than the Duke. This coupled with the larger 12 liter tank, proper sized pillion seat and much more user-friendly engine makes the 200NS a slightly better option than the completely maniac and aggressive Duke. I guess both bikes appeal to riders of different attitudes. After all, your ride does reflect your riding style and taste to a large extent!

Sharat:-  This is been the first bike to hose a triple spark plug. Is there any difference which you feel while riding, from a traditional single or twin(like the older pulsars)?

Akshay:-  There isn’t any difference in feel, having 3 spark plugs firing away beneath you. The difference may only be technical, helping the NS achieve great throttle response, good fuel economy and controlled emissions. Nothing that you’ll feel while actually riding this monster.

Sharat:-  Coming back to one of India’s main concern- What’s the average?

Akshay:-  The lowest the NS returned was 30kmpl under very hard riding and highest has been 38kmpl with both sedate city cruising along with a few speed bursts thrown in.

Sharat:-  Let us know what attracted you the most after riding about close to 2000kms.

Akshay:-  I think what I like the most about the 200NS is the confidence and assurance you feel when you’re out riding. The bike is so stable, so planted and has enough performance to leave behind almost every vehicle on Indian roads. This is a mature bikers dream – being able to commute sedately, along with the ability to go bonkers on weekends with the exhilarating performance!

Sharat:-  Who should buy this bike and who shouldn’t? Please advice potential buyers.

Akshay:-  Since this bike is such an all-rounder, it would suit everyone from a college-goer, to a commuter and even to a biking enthusiast. The bike looks good, goes great and is easy on the pocket too. The amount of power the bike delivers along with its sheer capability makes you remember the saying “With Great Power Comes Great Responsibility”. This beauty can definitely get you in trouble easily, but with even slightly decent riding skills anyone can feel and ride like a pro! The P200NS is surely a revolution!! 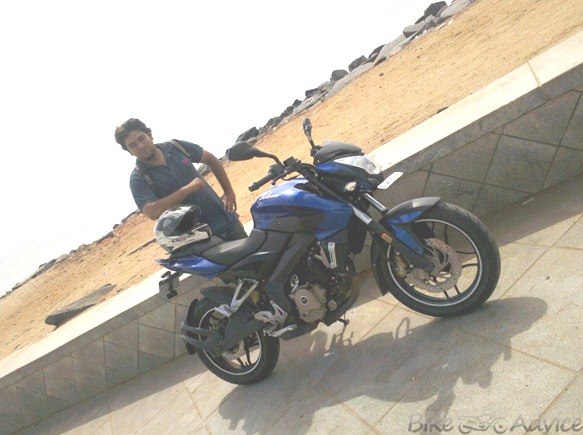 It was really a very detailed explanation about the new Pulsar 200NS and I would like to thank Mr. Akshay for sharing his ownership experience for BikeAdvice readers.