Hi I am Yogesh from Nagpur pursuing my bachelor’s in engineering. Following is my ownership experience of my Bajaj Pulsar 200. It has clocked near about 22000kms till date and here goes my experience with it. Before owning this machine I was riding a Honda Unicorn for 2 years as that was my very first bike. The Honda Unicorn was also a good bike just that I was looking out for a higher capacity bike so I went to various dealers for test ride and finalized two bikes. The 24th of December, 2008 was an awesome day for me as I booked my dream bike, the Bajaj Pulsar 200 carrying a liner “DEFINETLY MALE”. 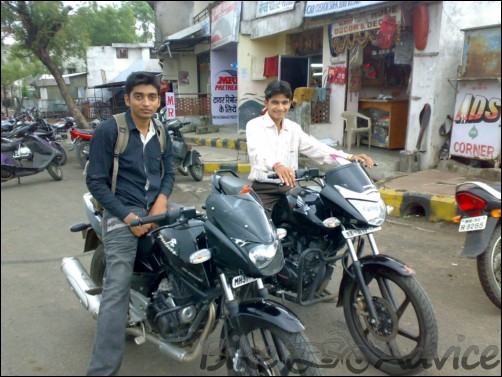 Before purchasing this bike I had many criteria’s which the bike has to fulfill under which I short listed two bikes the Yamaha FZ-16 and Bajaj Pulsar 200 dts-i.

There were so much confusions running in my mind regarding which bike to purchase. Personally being a big fan of Bajaj Pulsar200 attracted to its sporty posture, drivability and ease that bike offered the rider with which it cuts through the traffic all these good points attracted me very much with much improved wheel base, tubeless tires, oil cooled engine and a n engine that one can vouch for. I went for a test drive of both the bikes but the bike which drove me crazy was my dream Bajaj Pulsar 200. After the test ride I was sure that this was the bike I wished for and made up my mind for this bike. I just loved riding it, therefore went for one more test drive on another day to explore my craziness for this bike and booked it in black and got it delivered on New Year’s Day. First month of my bike was in “Running In” period which restricted me to stick the bikes needle under 80kmhr. Although I was very impatient to crack the bike in high speeds as I wanted to feel the thrill, the experience the fast accelerating machine but again my bike didn’t cross 1000kms and I decided to drive slowly till first servicing. Braking of my bike is also good it doesn’t skids when applied at high speeds. Due to all the bike’s characteristics, I reached a top whack of 133km/hr which I enjoyed the most. Here’s a small report from my side:

Looks: Being it a personal choice which can vary from person to person, according to me the Pulsar 200 looks are awesome. Bajaj Pulsar 200 has newer looks which distinguishes itself from its sibling pulsar’s. The canister gas reservoirs for rear shocks, Digital speedometer, LED tail lamp and the bigger meaner sounding silencer which distinguishes are heavenly to look at. The Half naked chain cover housing the O-ring chain is also an instant attractive addiction. The split seat and the tank pad makes it different from other bikes thus giving it the name who brought these to India the Bajaj Pulsar 200.

Performance: Bajaj Pulsar 200 has a split seat architecture that provides better style and comfort for both rider and pillion. The bike has 200cc powerful engine that churns out 18Bhp and the telescopic fork provides better control over the bike at all given situations. The display panel can detect failure in components which gives out a warning flash in case the battery fails, air filter choke or a high engine temperature. Both front and rear wheels have tubeless tires that are first in the motorcycle. The torque of the bike has been improved by ExhausTEC technology and the bike also has an improved clutch system. The gear can be changed easily and it is capable of taking more loads and absuse. The presence of oil cooler enhances the engine performance at extreme temperatures thus keeping the engine going.The engine has a maximum power of 18ps and you will get an average of 40 km per liter of petrol. The fuel tank has a capacity of 15 liters and has a capacity to store 2 liters of reserve petrol.

Verdict: The 18ps pulsating power generated by the 200cc engine provides great riding excitement to bikers; echo all of the Bajaj dealers. It is the first bike in India with tubeless tires both in front and rear in this segment. The tubeless tires offer superior stability that is safer than the conventional tube tires while adding to fuel economy, better road grip and stability. The bike has new digital console with Digital Odometer, Digital Speedo meter, Digital Fuel Gauge and two Digital Trip Meters. This Bajaj bike is the first one with an all electric start. And needless to say it is very convenient for a city rider. After all, we know the traffic jams right? Ask me downside of this bike. Well, it doesn’t have a kick-start facility. So when the battery is down (keep looking at the indicator flasher off and on!) or fused out, God save you or you got to push it to a recharge facility.