Hello Bikers, First of all, I thank BikeAdvice team for providing us a chance to express our Ownership Reviews about our rides. This is where we can standalone and share some feelings & thoughts towards our lovely rides. From my side I have two ownership reviews. One is my old ride P150 DTSi and the other is new P220. 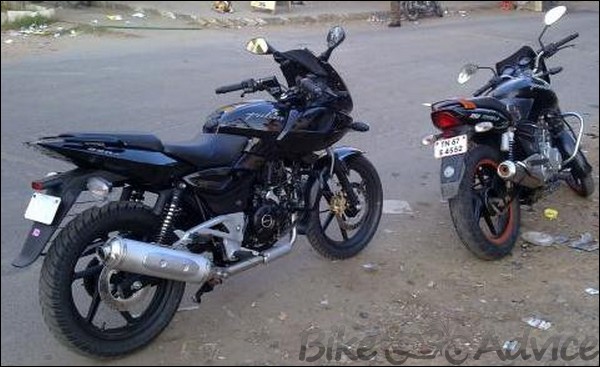 My first ride was the Pulsar 150 DTSi bought by April 2004. As everyone knows that pulsar was the eye catching and performance bike available in the market by that time. So I am a biker for life and Pulsar was the bike for me, with no hesitation I bought the bike. After that, it became a new companion for my life.

I just loved to drive my bike, if a longer ride or for a short commute to impress the girl next door. For everything it accompanied as my best friend. The performance and the capability of my first ride never let me think of an another ride. In my home town I drove my ride up to 2007. After that, I shifted to Chennai.

New place, new city and new driving style. I was quite surprised by the way people used to drive their Pulsars around here. Rash or Nice, Altered or Original, I just got impressed and I had the gut feeling that I have got the right bike for myself. I just moved my ride from hometown to Chennai. For my higher studies, it accompanied me a lot.

Sincerely it was a good support for my mini project ‘Side Stand Safety System.’ I just got a circuit kit placed in my vehicle ignition coil and chopped of some wires to finish the project successfully and I did that. After that when unwired from the circuit, it just started like as it was new. I was literally impressed and my friends were too in that (who did not came with their ride for the project experiment).

Second one was the most memorable. Every guys dream place. Pondicherry was the next target. It was planned and dropped by friends. But all of a sudden we started towards there by 7.30pm. Since the booz shops will close by 10pm, we were in a hurry to reach there. I just took the ECR road and Walla, always my oddo needle will be at hundred (most times).

We covered this 157km route in 1.30 hrs and finally we got what we want. The drinks of course. All the other guys were joining shortly, since they were not able to ride as fast as our gang. Then as always boozed and enjoyed the whole night there. Return was an eye candy for me. We started by perfect 3pm and cruised our rides along the coast line for the beautiful sunset view and the driving brought a pure pleasure for me. Since then always wanted to look for a long trip in my mind.

And Walla, the third trip planned and executed in an awesome form. This time it’s for the Worlds Second richest God visit. Tirupathi was my next location. But this time, it was quite different. I was the sole biker to ride along the NH 205. The road was very nice, as I planned to have a visit to my college mate. I just stared from Chennai by late evening to enjoy the night ride. 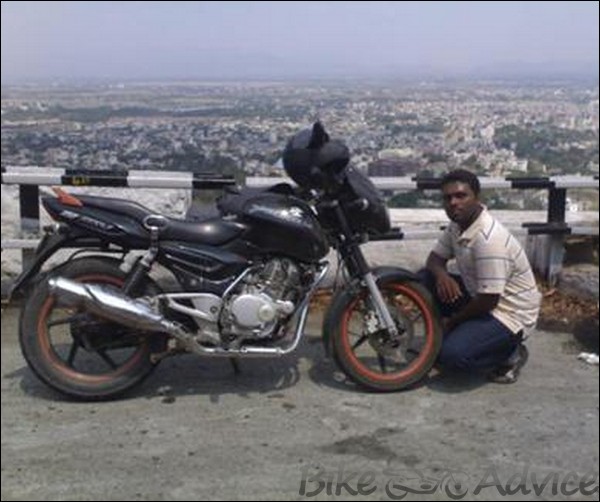 I just cruised at 70kmph along the NH and it was a nice climate, with the cold winds crossing through your body and every turn is relaxing as well. I reached my friends home after 4 hours of travel, with stops. I just saw my trip meter which clocked 194 km. I was quite impressed with my driving skills. After a good rest in my mate’s home, next morning we just went for sightseeing his place, and then started to Lord Tirupathi Temple.

The road to the temple was quite nice since the uphill and downhill is one-way. You can take on the corners with confident since there was no opposing vehicles like as that of Ooty hills. When I reached the top, myself and my friend did the ritual formalities and we started to downhill from there. When I reached his home and saw my trip meter, I nearly covered 305km. Really impressed. (PICS Attached).

After that I returned to Chennai, by which I have covered totally 569kms. The disaster that thing happened which I never expected. Before starting to Tirupathi, I just went through a tough bump which nearly made the engine oil leaking from the sink. I just noticed that the bike overheated than normal during the up climbing of Tirupathi hills, but thought that, it was due to the uphill effect.

When I was driving all the way to home from college, the engine just got seized and literally my ride came to a standstill where I was so much confused and regretted myself for not seeing the mistake that I have made. Then I moved it to service shop where the total system had to be stripped off and I saw the fault.

The piston just got melted with the liner. Oh my god. I still remember that sight when the mechanic showed that to me. It brought pain to eyes and I was never able to forget that and forgive myself. After painstaking 7-10 days of work, I got my bike back. But as the mechanic told that the liner has been changed, your bike must be ridden as a new one and I did that too.

But I was not able to get the previous performance that I enjoyed for nearly four years. Since then, the bike stared to give trouble mainly for the engine side. After many services and fitments, I was not able to make my ride as the old one. So finally decided to sell it off. By the time it has clocked around 60,000kms.

This time all lesson learned from my old bike, I thought of getting a new bike which have oil cooled engine, rear disc and touring comfort. Then decided to get the P220. When I took the test drive, the first thing I was impressed is with the riding position. The mass transfer shift, the way it handled, the performance, the projectors, everything impressed me a lot.

And I got my new ride by March 2011. Now with my new ride which clocked around 9000kms is quite good to ride. Now planning to have a long tripping covering nearly 1100kms to my hometown. Will update to BikeAdvice about this trip. But never able to forget my old black beauty. Still I love it. Once again thank you all for allowing me to share my thoughts and review.