The Kawasaki Ninja 250 has long been on the cards for a launch in India, from the day it sat in a Bajaj stall at an auto-expo to the day it was seen in a pro-biking showroom in Pune, this bike has generated a lot of anticipation; now it almost certainly seems this is one machine that’s going to rule the Indian roads. 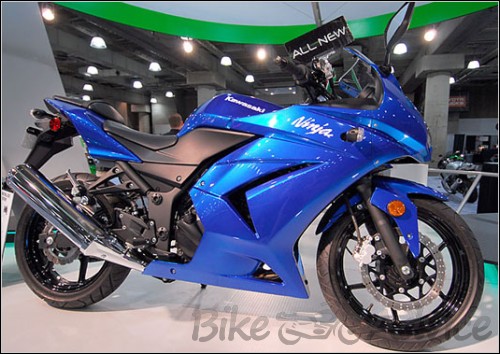 Since this bike was already on sale in the US, Europe and several Asian countries, it wasn’t too hard to get to know the real specs and capabilities of the machine. Known as the baby Ninja, it has been Kawasaki’s best selling sports bike. With a long history, this bike has surely evolved into something spectacular. Read on as we find out all about this little wonder.

It was first introduced in 1983 as an entry level sports bike for enthusiasts and experienced riders alike, its huge success has been widely attributed to the fact that it blended sports and utility together, featuring a user friendly riding position and wide power band, it was an instant hit. The third generation of the bike was sold for 19 years from 1988 to 2007 without significant changes; this fact alone stands testimony to the bikes huge appeal. 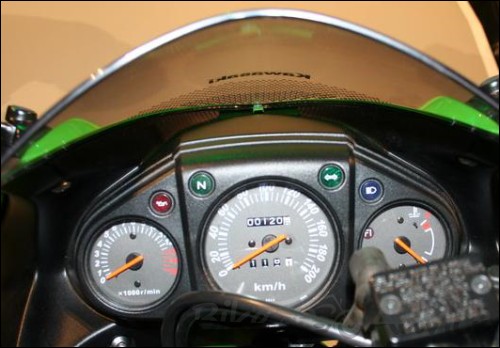 Engine, Power and Efficiency: The version that is slated for India is the latest fourth generation bike, it features a twin cylinder four stroke, eight valve, DOHC 250cc unit that redlines at 11,000RPM, featuring liquid cooling and a six speed gearbox, this is one machine designed to stay on the top. The carburetted version being sold in the US generates 32hp @ 11,000RPM and 22NM of torque at 9,500RPM. The same version, according to owners, delivers around 55 to 75 miles per gallon which translates into 17 to 24 km per litre.

The strict emission norms in India would most probably mean that the fuel injected version would be heading here so you can expect the power and mileage figures to be slightly greater. In case you were wondering, The carburetted Ninja on US quality fuel could attain 115mph, that’s about 184km/h. Acceleration is also something massive with 130km/h attainable in just 15 seconds.

The bike has been tuned for low and mid range usability along with adequate high end power for easy drivability and stress free long distance driving. The engine features technologies such as direct valve actuation and thick pistons that contribute the awesome power this machine produces. The Denso radiator along with cooling fins ensures that the engine performs consistently during heavy use. Two catalytic converters are used in the exhaust system that reduces emissions and increases efficiency. The bike is also equipped with an automatic cam chain tensioner that avoids looseness and chain slack hence lowering mechanical noise. The six speed gearbox uses a clutch damper that reduces jerks at low speeds and offers a smoother pick up.

Chassis, Suspension and Brakes: It features a diamond-style frame made of thick steel tubes which means high stability and stiffness at high speeds, this frame has been a tried and tested model that has evolved from over twenty years of existence, it carries on with an improved feel over the previous iteration along with new improved materials for light weight and rigidity. The engine with the parallel dual cylinder setup centralizes the bulk of the mass which improves handling. The mass centralization concept was already featured in the FZ series of bikes so you must be having a pretty good idea of its advantages.

Another crucial component that gets the Kawasaki treatment is the suspension system. The front features an inverted shock absorber that has a travel of 4.7 inches and a Uni-Track rear mono-shock that travels 5.1 inches which also happens to be adjustable. The brakes featured are massive petal discs with a 290mm disc up front and a 220mm in the rear. Its activated by two piston callipers for both the front and the rear and according to reviews provides ample and direct feel. 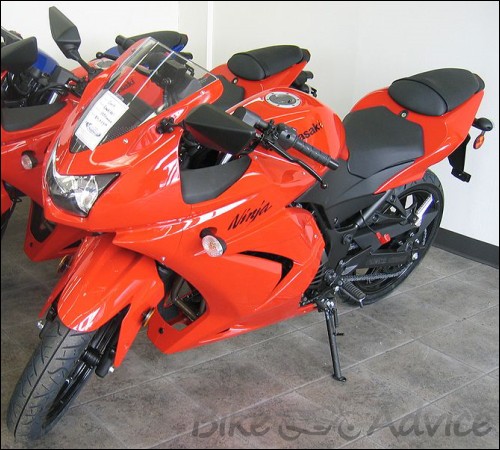 Design and Ergonomics: From the looks of it, this bike can easily be mistaken for a bigger cc bike, unlike the R15, it has wider tyres. The alloys used are the same that can be found on the larger ninjas. The US market can choose from Metallic Diablo Black, Sunbeam Red, Candy Thunder Blue and the ninja trademark: Lime Green. The bikes seating position has been designed with a blend of both comfort and sportiness which means that not only can this bike tear up the track but can also continue going on the highway for as long as anyone can desire. The fuel tank has a 24 litre capacity making sure that fuel stops won’t have to be frequent.

The fairing that has been wind tunnel tested is claimed to do a good job at handling the high speeds this machine is capable of. The rear seat can easily be opened and has enough storage space for a few bottles of water. The bike also features two hooks under the rear seat that allows one to anchor anything with the help of a chord; also the rear seats feature an elastic band that makes it easy to quickly fasten something on to the bike. The instrument cluster unlike most new bikes in India is a fully analogue one and it does a good job in representing all the numbers that really matters, that shouldn’t be a problem considering that even the new Hayabusa uses the same cluster. The cluster houses the tachometer, speedometer, trip meter, fuel gauge and temperature dial and warning lights.

What We Say: From what we know so far, this machine is a total beast that also happens to be practical. With its rider friendly seating position and power delivery, the Ninja would surely appeal to those who want the best possible riding experience among any quarter litre bike that exists in the world today. Expect the fuel injected version to hit the Indian shores thanks to the new emission norms; Bajaj plans to import the bike as a CKU (Completely Knocked-Down Unit) which means that the parts will be imported and then later assembled in India. Pricing is expected to be on the north side of 2 lakh’s, even then it won’t be wrong to say that this bike is definitely going to set the roads ablaze.