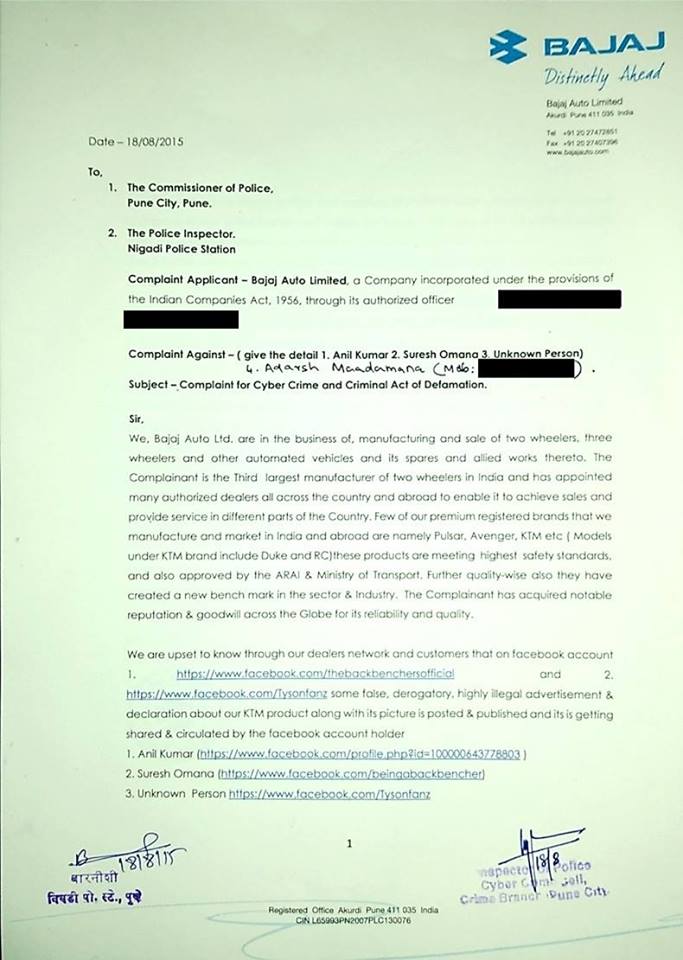 If you are active on Facebook, you must have come across a meme which claimed that 50 percent of owners of KTM bikes in India are not with us anymore!

We do not want to get into who started it but all we know is that it went viral quite quickly and though it appeared to have been started as a humorous time-pass, it was a serious allegation on KTM’s motorcycles and would have definitely instilled fear in the minds of prospect buyers!

Taking strong action against the involved, Bajaj has filed a police complaint against them and has issued an official warning to take further serious action if such posts are not removed.

Now this is possibly one of a kind act and may serve as a warning to people who spread baseless posts.

Coming to the bigger scheme of things – Those who feel KTMs because of their immense power cause deaths should understand that it is generally the immature and erratic behavior of young hot-blood lads, which causes accidents. It should be understood that without understanding a machine thoroughly you should not let hell break loose, specially when you have over 40 horses to tap!

Both RC390 and Duke 390 are fantastic world-class machines offered in our nation at incredible prices and offer truck-loads of safety features, ABS and Metzeler tyres are paramount among them!

While we are at this, we would urge you to be responsible, ride with your gear on, helmet always and enjoy motorcycling! Motorcycling is NOT touching top speeds, racing with your friends, creating nuisance on dense public roads.

Motorcycling is enjoying your steeds, however small or big in capacity they are responsibly, without causing fellow road users any trouble! Be rational and sensible and live longer…