Introducing myself, this is Arunkumar, an oil and gas professional, a Chemical engineering graduate from Anna university, Chennai, mad on bikes, bike riding and bike science. I stay at Medavakkam, an out skirt of Chennai. 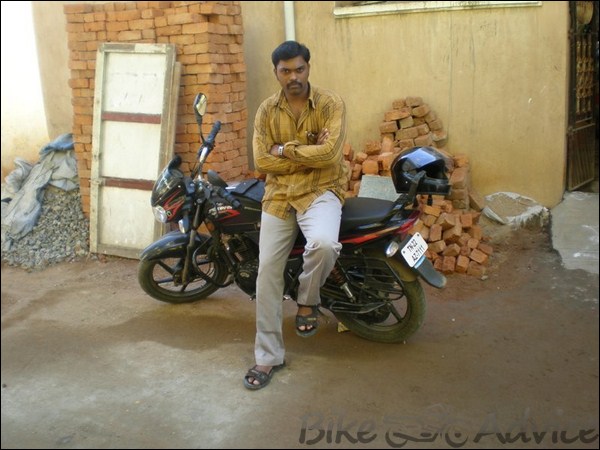 It was on May 2007 I had brought a Bajaj Discover 125 which was launched in all black for the first time in India. Before that, I was planning for the Apache 150. As soon as I saw it I fell in love with it and changed the plan of Apache because its looks certainly attracted everyone (during those days, there were not much competition in the 125CC category) and was also 7000 bucks cheaper than the Apache.

Because those were the days I had just learnt riding geared bikes and I was novice to bike riding. As soon as I started riding my bike, it kindled the rider inside me and whenever I had to ride my bike, I ride with interest, no matter how old it is. Those were the days I did not have more cognizance about how to select a bike which would last long with proven durability, reliability and quality.

Let’s get into the categorical review and I don’t want to make a movie out of it because I’m not much satisfied with the bike. This is not a mere review, This Is A Warning!

I don’t want to compare the bike with the present 125 CC bikes which are highly advanced in style. But during 2007, Discover really embossed its looks in my heart. But anyway, my bike looks good for me still, as it looked in the beginning. 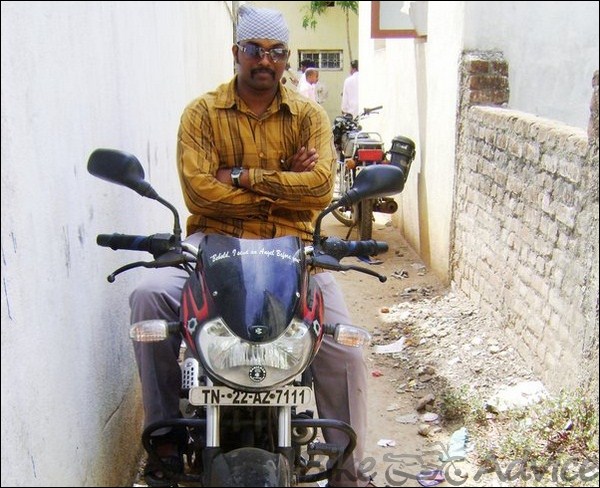 That is the basic feeling every biker should have, without it, no one can ride it with all his heart. Technically speaking, the handle bar design is good with its wide angle grips which were fitted with weight balancers which don’t work much in balancing! Petrol tank when looked from the back is good.

I am sure that people reading this review wont like much tech specs of the outdated Discover model, but that is one which completes a review, isn’t it? Ok now, it has a 125CC engine with 11.5 bhp of power which is still the most powerful engine in the 125CC category except the KTM 125 (I don’t exactly know what KTM 125’s power is), four speed manual gear box, air cooled engine and with a push-rod and rocker arm type of valve arrangement (I hope so) and two spark plugs.

During the run-in period I handled the bike just like a new born baby, since handling the bike during the run-in period is definitely going to destine the life of the engine. During the early days, upto 1 year of the purchase of the bike, Discover proved to be very good and out-performed all its competitors. Due to double spark plugs, the power delivery was gradual at all speeds.

But this applies only upto 2.5 years of the purchase of the bike. The engine was not that vibrant, but was good in throttle response. Now, it is the time to open my heart about the Bajaj product which is a baby in the 3 “TYs”, i.e., Quality, Reliability, Durability. This is the department where the Bajaj people have to learn from the kinder garten level. No match for the Yamaha, Honda and Suzuki! More false neutrals, notchy and faulty gearbox.

Around 8000 kms, the bike started to perform very low despite I was keen at maintenance logs. I had to change the valves, inlet and outlet, since my personal mechanic advised me to do so. I always take my bike to my personal mechanic because the Bajaj service center guys learned more to deceive than to do a genuine service. The service center guys do not know much concerning the engine.

They just know how to dismantle and mantle the bike. They almost never tuned my bike properly as my personal mechanic did. After the valve replacement, I started to face the worst days of my bike riding. I started to hear a “grr” sound from the engine which was perhaps the sound of the hydraulic valve tappet (as per my knowledge, woe to the push-rod arrangement of Bajaj!) for which my personal mechanic told which should not be changed for a month since the new set of valves had to set in.

Oh my God, I was so irritated to ride the bike with that “grr” sound since it robbed all my riding pleasure. After a month when I took the bike to my mechanic hoping to curb that awkward sound, he frustrated me saying that riding with that sound should be OK and it should not be adjusted in. I became annoyed of his words. Afterwards riding the bike for some months, I took it to the service center to have it curbed.

After that, the clutch plate had gone. I had to replace it and it was done.

What an irresponsible answer! There are mechanics who do not even know the difference between the sound of engine and sound of tappets or at least they are such indolent to meet the customer’s needs. Upto 30000 kms, the performance for OK and was not upto a frustrating level.

As I crossed 40000 kms, I lost my gearbox. I started to hear a “pada pada” sound when I shifted to the 4th gear at 40 kmph. My mechanic advised me to ride the bike with it since after some time, he wanted to change the valve set-up, gear shaft and some thing additionally. But being a normal middle class person, I could not afford for frequent maintenance tortures my bike gave me.

Now, I have crossed 65000 kms, this is the first time I ever met a minor accident in my bike. I never met an accident upto that since I glued myself to the traffic rules and always wore a helmet for my commuting. It was the fault of a pedestrian on whom I dashed my bike. Thank God, I escaped with minor scratches and he, with almost no injuries.

Now, the bike just does like an old man which climbs a staircase. It takes more time just to reach 40 kmph! But the bike is very powerful in the 60-80 kmph section. That is all it does. I did not take the watch but it may be more than 5 second to cross 40. The bike is very sluggish. Now there I a potential and a peculiar problem I am meeting. The engine does turns off itself when on idle (not due to low idling speed).

When ever I idle my bike at signals, it turns off, out of which I am experiencing grave tortures in Chennai’s traffic. The mechanic cleaned the carburetor twice, but it still does persist. Now I’m still riding with this problem and couldn’t take it for service due to some financial reasons. Goes off, in traffic and I have to use the self starter to switch it on and goes of again and again. The engine operation is not constant and rises automatically when I steer to the right, which my mechanic always used to ignore. “More Woes Per Mile!”

Mileage figures were well in the starting periods. Gave between 65-68 kmpl during the first year. But now, it gives around 40 kmpl only. Readers, note, I used to change the engine oil every 3 months even if I my economy prevent me to leave the bike for maintenance. Mileage is worse than a 150cc mill. Since the engine was not responsive, I used to twist the throttle hard for pick-up.

Braking at the front wheel is good. But braking at the rear wheel during emergencies is just like placing my head at the rail track myself. The bike skids badly when braked hard at rear, the bike pulls towards right during hard braking. This is because the weight is not properly balanced and distributed. The condition goes worse in wet roads, not lesser than even the Apache’s tyres!

Stock tyres were Dunlop which was so bad against punctures and braking as well. I had to spend more on puncture repair frequently. Then I switched to MRF Zapper-C which was a boon for me against punctures. They offered superior stability and were planted to the road well.

Trust me, the bike has run more than 30000 kms with MRF, till now, I have faced only a single puncture, even with the punctured tyre, the bike ran for two weeks before I noticed it was a puncture. Thanks to tubeless tyres of MRF. They look good still now and perhaps will run more before it demands a replacement. I will call this the only good part of the bike.

Unlike the latest Pulsars, it has an AC system. There is nothing bad about the electrical section since Bajaj itself is a brand name for electricals since it manufactures fans, irons etc which does good. Switches and controls are of good quality but the pass light goes mad temporarily during heavy rain and come good again.

Stock headlight is Halonix which performs well till now and one indicator did fuse which was replaced in the earlier days. But sometimes, the turn indicators blink in a frequency more than the normal. Hence I would advice the readers never start an AC operated bike with headlight and turn lights on, which may damage them.

Besides suffering, I always enjoy the ride because I am used to it and always enjoy with what I have, but seriously seeking to switch to another bike and waiting for the right time since my economy does not allow me to do that now. I will never advise a Bajaj product for anyone (Pulsar maniacs, please forgive me).

They are showy and powerful (power which fades after 2 years) but lack reliability that Hero Honda (now HMC), Honda, Yamaha, Suzuki & RE offer. Now, I am planning for a TBTS, R15 version or some nice bike in the category 150-200. I don’t know how P200 NS is going to perform. I would appreciate Bajaj if they have put efforts in the quality department.
Readers, if you want to suggest me a good bike, please go on. No 125cc, because I’m planning to take the bike for long rides. I have some crush on the Apache RTR 180. What do u guys say? How is its quality and reliability? Please feel free to comment in this section.

(P.S: This review may seem to be a complaint box against the Bajaj Discover. But I swear it is purely based on my experience and I am posting this review as an eye opener and not in an intention to discredit the Bajaj brand. Pulsar enthusiasts, please forgive me)