Harley Davidson has been a brand that carved a niche for its own, it wasn’t too long after when other brands followed suit. Although HD’s have always been far superior in almost all aspects, there have always been drawbacks with the machine, primarily its huge size, price tag and maintenance costs. Apart from these big boy machines, there are surprisingly several other alternatives that are much easier on the pocket. We take a look at a home bred alternative to cruisers, say hello to the Bajaj Avenger 200 DTSi 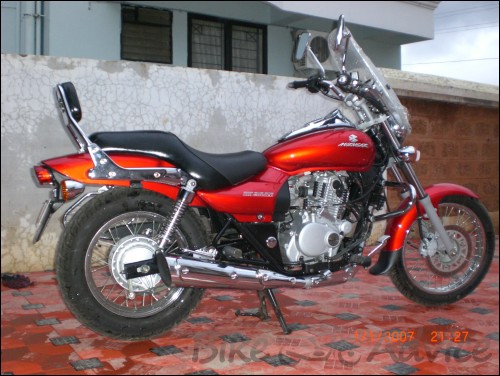 If you may remember, the avenger was advertised with a catchy tune and a tagline “Feel like God”. It was a welcome addition to the choices of bikes in the Indian market with Bajaj putting in considerable effort to keep it updated and simplified despite its relatively low sales figures. It was first introduced with a 180cc engine borrowed from the Pulsar range of bikes, now though, it features the 200cc engine from the Pulsar 200 that we all know and love.

It appeals to those who love riding, who love the freedom and the liberation that a bike offers, it’s not the fastest or the most bad ass looking bike on the street, but what it is, is something much more, it’s a machine built with a pure purpose, to show how every journey can be a pleasure. If you are one of those thrill seeking seasoned riders, this is not for you. An individual with a unruffled and composed self would love it much more than any other. 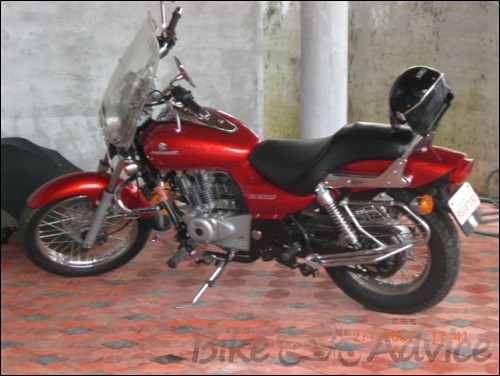 Krishna Kumar, an avid reader of BikeAdvice, is an expatriate residing in Qatar, he drove around a four wheeler until once he felt the impulse to get his hands on a bike, he wanted something unique, not too expensive and stylish. After a while of researching, he stumbled upon the Avenger 200 which fit the bill perfectly. We review the Bajaj Avenger 200 sold here, In India, which happens to be identical to its exported counterpart. Read on…

As said earlier, it features the 200cc engine borrowed from the Pulsar 200 which is known for its great overall performance and efficiency; the oil cooled mill is mated to a five speed transmission which is also quite similar to the Pulsar’s. Bajaj claims a top speed of around 115Km/h, with a power rating of 17.5 Ps at 8000Rpm and 16.78Nm at 6000 Rpm, the advantage of oil cooling is that it helps maintain a steady oil temperature during hard riding and high heat conditions. In real life, the engine feels quite the same as the 200’s with a difference in power delivery due to the 15 Inch tyres at the rear, the smaller rims ensures better acceleration at the expense of top speed and also ensures that there is usable power across the rev range. This is well suited for touring across long distances. 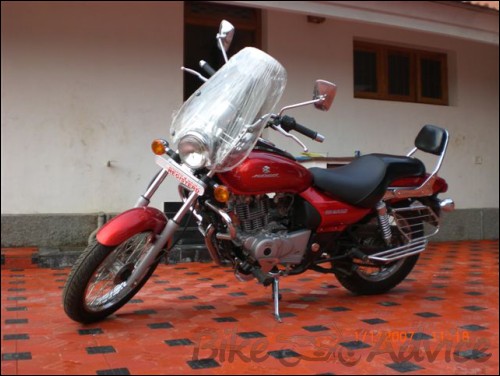 The 15 inch wheels also reduces the need for gear shifts every once in a while making for a stress free journey, speaking of which, the gearbox used is the same as on the Pulsar, one common critique you would find of this ‘box is that it lacks the feel that most shifters have and finding neutral can be a little tricky. Bajaj also claims a mileage of around 35 Km/l, which is another drawback of having a low diameter tyre in the back. On the road, however, it barely feels stressed out at around 70-80 Km/h and is always ready to lunge forward with the flick of the wrist. The exhaust note is completely different from the Pulsar machines with the chunky and short silencer. It sounds more refined and less strained at any given RPM.

As soon as you sit on the bike, you would notice that it feels quite stable already, it feels balanced right away courtesy of the wide rear tyres, long wheelbase and kicked out front forks, for a person who is used to riding around the usual 150cc bikes, it can take a while to get used to but when you do, it feels great. The bikes straight line stability is commendable. Cornering capability may not be its strongest points but it does it acceptably well. Being a cruiser, the riding position is relaxed and comfortable, the gear shifter and brakes are positioned up front which helps in keeping the legs relaxed at all times; it could have been a little bit better if Bajaj had used footboards instead of foot pegs for the rider. The riding position is great for the open roads where you can go on and on but it surprisingly feels quite flickable in the city areas too thanks to the low centre of gravity. 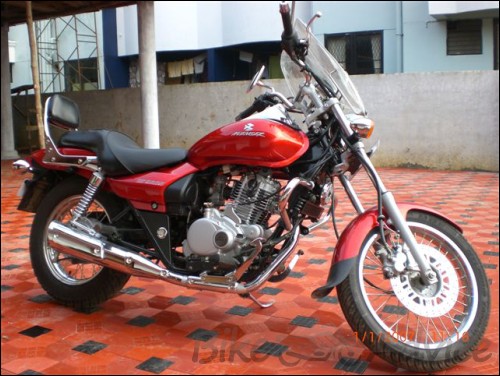 The suspension is adjustable at the rear with 5 settings for preload, it basically makes the ride firmer or softer, the firmer setting can be used when riding with a pillion and the softer can be used when cruising alone, either way, the seating position complements the suspension system to provide a comfortable way to eat up the roads. On really shattered roads, you may feel a little stress on your back but otherwise, it is stable, planted and comfortable as wrinkles and undulations on the road can barely be felt.

It features a 260mm Disc at the front coupled with a 130mm Drum at the rear, on tricky surfaces like mud or wet roads, the bike would feel wobbly under hard braking, you would need a little practice to understand how it should be done, avoid lockups and its fine. The brakes are sharp and accurate.

The bike sports a classic look with various chrome finished parts and a body that looks like a Harley Davidson. The Fuel gauge is mounted on the tank with other indicators; you can also have a front windshield installed on the bike from Bajaj which can keep the wind away; this in our opinion doesn’t look too good on the bike and also distorts objects when seen through it. Being plastic we believe it can get scratched with time and can turn into a difficulty when riding at night. 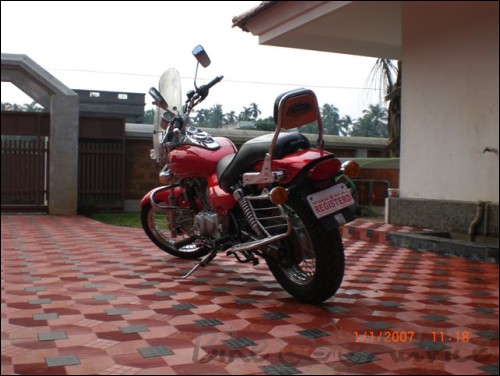 The view from front with the long front shocks and the chrome speedo is quite cool and appealing, one thing about cruiser bikes like these is that they never really run out of appeal, unlike bikes in other segments whose designs become boring with time, this machine can stay trendy for years to come, it sports a timeless appeal which only well designed cruisers possess. The rear backrest, the chrome around the headlight, the wire spoked wheels and a lot of other elements make this bike stand out from the crowd, you can trust it to stay as appealing as it is today, 5 years from now, provided its well taken care of.

With the current craze being all about fast bikes with the highest top speeds, the Bajaj Avenger 200 DTSi is one that is not too common on the roads, and because of this, you would notice that it attracts a lot of eyeballs. A dude on the bike with an open face helmet and a pair of shades would be instantly christened “cool”. If you are a guy with a reservation, about what your bike should be, similar to Kishore’s then this is definitely the bike for you. It’s simple, well designed, has good manners, its practical, inexpensive with a price tag of around 66,000 Rs (Showroom, Mumbai), and comfortable.