The newly launched Bajaj Boxer, exclusively for the rural market was recently rolled out for the Gujarat market.  The country’s second largest two wheeler manufacturer has expressed its interest to achieve a target of 4000 units of Boxer brand of bikes in this state. 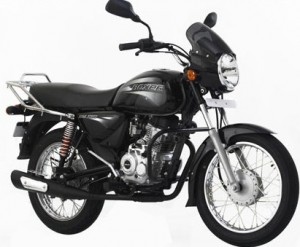 Mr. Manish Khatav, Zonal Manager, Bajaj Auto Ltd said, “We are aiming to achieve a sale 4000 boxer  bikes  every month in Gujarat. This new bike is especially designed for rural and small town areas and  so we are  currently focussing on buyers from the rural areas.”

The company is presently owning a market share of around 30 – 33 per cent as of now and is planning  to  sweep the market with a flat 40 per cent market share by the end of this fiscal year. Bajaj Auto sells  around  20,000 units across the entire Gujarat. This will make it the major player in the state of  Gujarat, once  achieved and Boxer brand is expected to pave a major way for this accomplishment out  there.

Mr. Manish also added, “With good monsoons, the rural economy is doing well and also with  recruitments    in urban cities on a high, we are expecting a good demand for the all new Boxer as it is a  fuel efficient bike.”

At the time of the launch of the Boxer brand of bike, Mr. Vimal Sumbly, Deputy General Manager, Marketing & Sales, Bajaj Auto Ltd said, “A significant number of consumers in the smaller towns need a powerful, rugged utility bike. Also we see a major shift happening from the 100cc to 150cc in the Bajaj Pulsar variant. So we thought why not give the rural customer a tough bike at the price of a 100 cc bike. We are launching the new Boxer bike in phases and we have rolled out in Gujarat after Maharashtra and Tamil Nadu. With good monsoons, the rural economy is doing well and with recruitments in urban cities also doing well, so we are expecting a good demand for the new Boxer as it is a fuel efficient bike.”

To particularly mention about the share of Bajaj Auto in the sports bike segment, the company holds 33 per cent share in the state of Gujarat and a whopping 50 per cent when the entire Indian sub continent is taken into consideration. The Pulsar brand of bikes accounts for the major contribution of this stake.