We had only one question in our mind at Delhi Auto Expo 2012, where is new Pulsar and KTM Duke at Bajaj Auto stall? It was sheer disappointment that Bajaj Auto did not showcase its KTM Duke 200 and next generation Pulsar. However, this does not mean that the company does not have new products for 2012. In fact the company did not showcase the KTM Duke 200 and Pulsar in order to gain larger attention afterwards. Bajaj Auto is all set to launch KTM Duke 200 on 24th January, 2012 in Delhi. Bajaj Auto is converting all its Pro biking showrooms into KTM inspired showrooms as a part of pre launch preparation. Apart from this Bajaj Auto has also included KTM link on its website and KTM did the same thing, including KTM India page on its website. 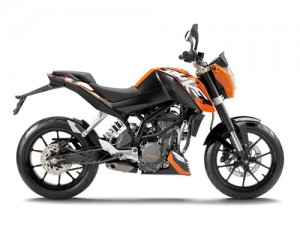