Nostalgia: Fuel has always been costly, even when it was priced around Rs 45 per liter back in 2004. I had just completed my HSC and was very excited to enter my graduate life. 28th August is when I turned 18, got my license and it was time to say ‘alvida’ to my 4 year old metallic green Hercules 5 speed top gear bicycle and ask dad to gift me a brand new fuel efficient bike. 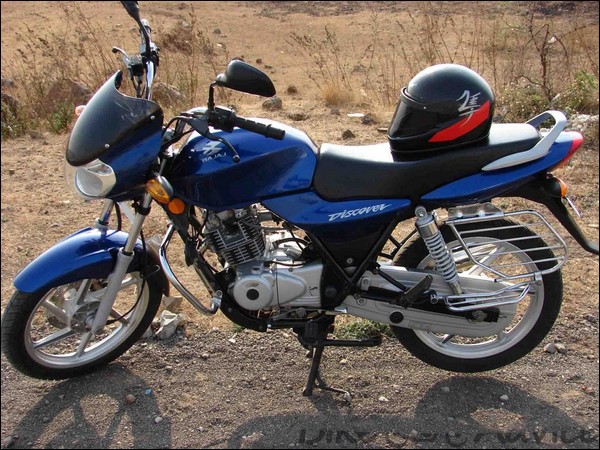 Bajaj Pulsar was selling like hot cakes and had just got its second upgrade with DTS-i, ExhausTEC, Alloy wheels and Nitrox suspensions. I had decided, this would be my ride. But then, we all know how parents are, they felt Pulsar was too big for a novice to handle. Being an obedient child I had to budge but on the other hand the idea of settling down with a 100cc was haunting me.

Oh god not a CT100. Earlier days of my BBA Marketing, and there could have been no better way I learn what exactly a Market Segment means. I found myself stuck in a segment that wasn’t working well as there were no good options available in the 125cc executive commuter category. Yamaha Fazer with its funny muffler, TVS Victor GLX with its hard to grasp behavior, LML freedom a no from dad and Bajaj.

I mean Kawasaki’s Wind 125 which looked as old as a Caliber, precisely no bike had a genuine reason which would make a 100cc buyer to upgrade or a 150cc prospect to downgrade and buy a 125cc bike. I miss those days. Internet didn’t have many review sites or blogs, so the sole sources to rely on were the Automobile magazines available at the news stand nearby. 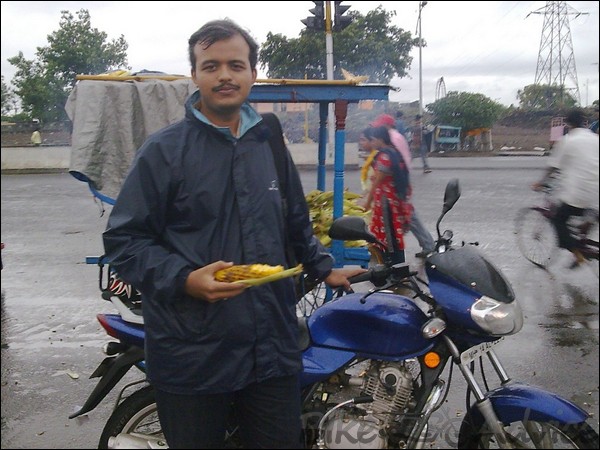 I remember and have still preserved copies of letters posted to Overdrive & Autocar asking them to help me buy my first bike. No one actually had an appropriate solution. As it’s said you keep searching the whole world for solutions but forget your home. Dad, who has been working with Bajaj for past 25 years, did have good news.

Bajaj, was ready with its K60 (Kaizen 60 km/l) project after 30 months of hard work and was launching a 125cc bike. What a timing. I felt it would be called Pulsar 125, but then it was christened Discover DTS-i. The name was fresh like other Bajaj bikes and to add excitement Jackie Chan was offered 22 crores to promote the bike. It’s a sad thing that very few recognized Jackie in the brilliant ad campaign that followed. 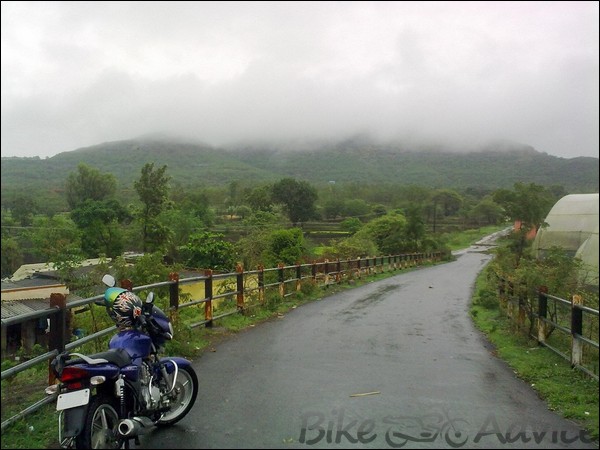 It took no time for the auto magazines to go gaga about the bike. Magazines were filled with 125cc shootouts each trying to cash on the heat in this segment. The first thing I did was visited the showroom for a test drive and booked the bike. There were three variants available,

The top version was an obvious choice costing around Rs 50,000 on road here in Pune. Dad being a Bajaj employee, priority was obvious at the showroom in Wakdewadi, Pune.

Distinct Features (of its time)

The ride kill switch, A side stand indicator, Glove box. 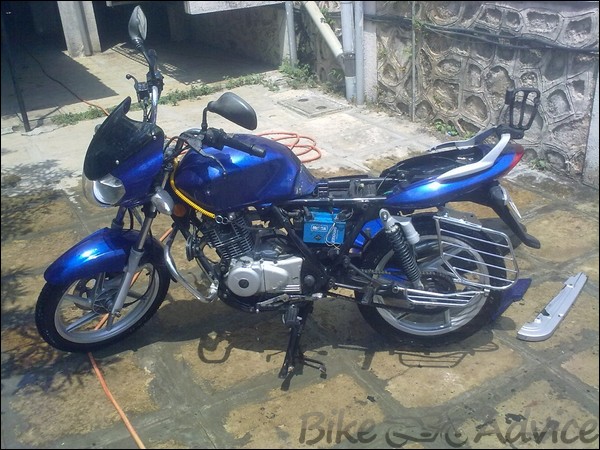 DTS-i: What to say about the twin spark plug technology that has changed the riding experience for Indians. DTS-i was a quantum leap of its days. Having it on Discover makes you feel like you are on a larger capacity bike. The instant surge that the bike has, I doubt any 125cc or for that matter 150 cc in 2004 except Pulsar, could beat Discover for its pick up.

ExhausTEC: A small box attached to the header pipe of exhaust. Many feel it’s a bogus technology, I too felt the same. But it’s in the dense traffic riding you do get to know how useful the technology is. The bike can be ridden at a speed of 15 to 25 kms even in 3rd gear at a breeze. Though not recommended, but sometimes situations can’t be avoided. The tremendous torque generated is a wild card in traffic.

Large Air Chamber: The chamber through which the bike breathes is large and properly engineered to provide a lean mixture for combustion. Also the roar produced by the bike is noteworthy. If it wasn’t for the size any one would have mistaken it for a Pulsar.

When the engine is cranked the noise itself gives you an out of the world experience but to spoil that experience there are tremendous vibrations through the handle bar which miraculously disappears in the second gear. Other thing that adds up to the negatives is the gear shift. One, the gear shift is not at all smooth, it takes you to Stone Age of biking, and second the first gear provides tremendous unnecessary power. 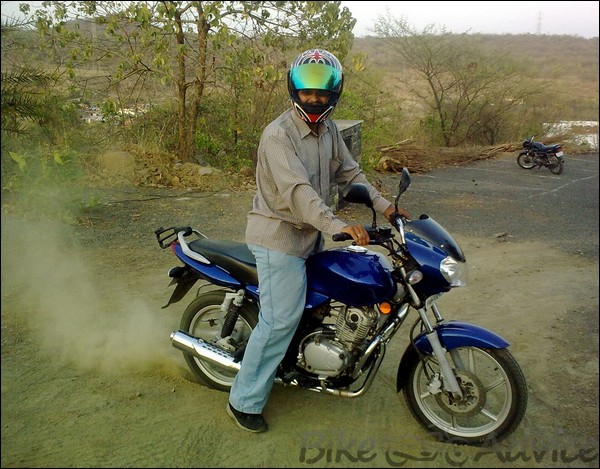 Making it too difficult to maneuver the bike and forces to change the gear within seconds of movement. This is a headache in hilly regions. Gears have to be changed very frequently due to the first gear blunder. Somehow the gear ratios don’t match the expectations. But if you have lived with this bike for quite some time you do understand its behavior and if the gears are shifted at right points they do change smoothly.

Patience is the essence. Further in 4th gear once the bike reaches a speed of 70 km/hr the vibrations reappear to spoil the show. As speed increases the vibrations too, to an extent that the wrists get numb. 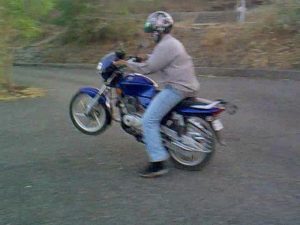 The bike did require a 5th gear. Handle bar dampers are of no use here. The best patch to enjoy riding Discover 125 is between second and fourth gear till the speed of 70 km/hr. Vibrations spoil the party if revved above this.

But the positives of the bike do overpower the negatives. Once the rider gets used to the vibrations and gear issues the bike appears to be a true segment performer. Rider would never feel the deficiency of power to leave the traffic behind nor feel the torque to be low while cutting the traffic. Performing a wheelie is very easy compared to other bikes in this segment while stoppies did require some practice, as I was a novice.

The top speed achieved is 110 km/hr on NH4. All this at a true world fuel efficiency of 58-62 kmpl. The fuel efficiency does go up on highways to 65+ if ridden at appropriate speeds. The bike gives a soothing feeling on highways at a speed of 60kmph. The ability of the bike to take on turns is simply marvelous. MRF and Discover is a terrific combination to tackle curvy rides as the bike kisses the road similar to the RX100. 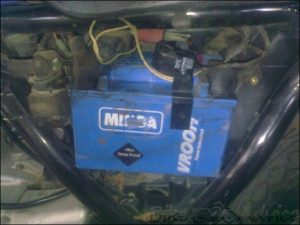 My Discover will turn 7 this January and I aim to own it till it turns 10. Not a single fall till date. It has been a true friend for rides in and around Pune. The best cherished ride is the one to Sinhagad fort as that is when I discovered every minute detail about Discover’s behavior.

Thank You BikeAdvice for giving a chance through this contest to review classic bikes. Ride safe and happy biking.