‘Team BikeAdvice’ has given its maximum effort to the core in getting our readers updated with all the happenings live and direct from Pragati Maidan, the venue for Auto Expo 2012 in the capital city. The gala event which is THE biggest in the sub-continent has finally come to an end with its valedictory session. 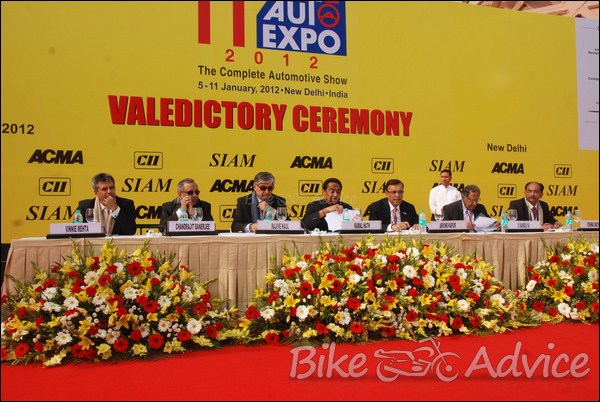 Commenting at the valedictory session of the 11th Auto Expo in Delhi, Mr. Kamal Nath, Minister of Urban Development, congratulated CII (Confederation of Indian Industries), SIAM (Society of Indian Automobile Manufacturers) and ACMA (Automotive Component Manufacturers Association of India) on successfully organizing this biggest expo. Mr. Kamal Nath said that he was delighted to see the increasing vitality in every expo and changing profile of visitors since 2006, with the age profile of visitors falling every year. He further said that this sector has been an index of the economic health of the nation and after observing the success of the Auto Expo, nobody can say that the Indian automobile industry has been seeing a down trend.

He stated that in the last several years India has been both adopting and adapting to globalization challenges. Yet India has been unique in some sense, with its youthful demographic profile. He stressed that growing disposable income in rural areas will be key for the growth of this sector. He further stated that growing urbanization is a huge challenge for the government and a strong urban planning process is needed to address this issue.

Mr. Rajive Kaul, Chairman, Auto Expo 2012 Steering Committee and Past President & Chairman – Trade Fairs, CII, declared this Expo a huge success. He stated that this time around 1500 exhibitors from 24 countries (Oh, that’s just great) have participated with 58 new launches, 9 new concepts and 12 green vehicles. This figure here includes the launch of all automobiles which includes two, three and four vehicles Large crowds visiting the exhibition demonstrate the high aspiration of India’s young population. Although the auto industry has been constrained by several challenges such as high inflation, high interest rates and depressed global economy, this Auto Expo has been a success despite all odds. There has been a sheer display of quality, technology, design and R&D capability at every pavilion. The Indian automobile sector is now at par with global standards and has emerged as a global manufacturing hub. With these capabilities, he said that the auto industry which has been growing at a compound annual growth rate of 15% over the past 5 years should continue the growth streak in future as well.

Mr. S. Sandilya, President, SIAM, said that this Auto Expo has displayed new launches and has also facilitated direct dialogue between producers and customers. He, however, has asked for a bigger venue and change in the timing of the Expo from January to early February to accommodate people’s expectations.

Mr. Arvind Kapur, President, ACMA, said that despite all odds and infrastructure challenges, this Auto Expo has been a success. In addition, he highlighted that OEMs are playing a pivotal role in the growth of Indian auto sector. The Indian auto industry is now ready to compete with the best in the world and is eagerly looking forward to many more such exhibitions. However, he highlighted that in order to showcase the achievements of the industry in a better format, a bigger venue is required.

What do you feel about this auto expo? We’ve to agree the fact that many companies which were hyped to launch their new products failed to keep up their words. Leave your comments in the form of words below.