Suzuki was the first one to kick off things in both the 4 wheelers and 2 wheelers categories. Their launches were scheduled right at 9:00 am in the morning of the inaugural day of 5th January. As we have reported live on that day that they launched the 110cc mass market motorcycle Hayate and the more contemporary looking 125cc scooter Swish125. 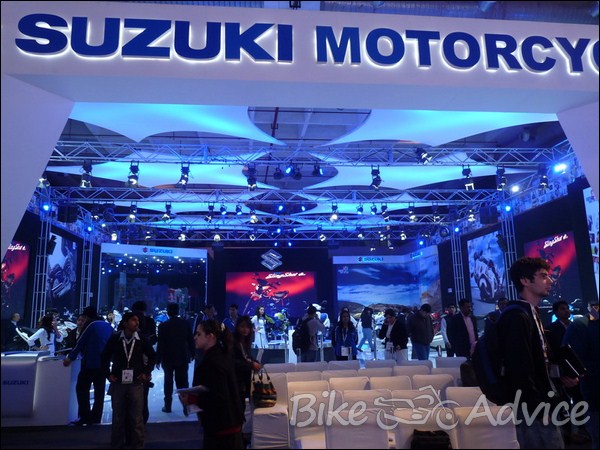 All along, I was listening to their theme music ‘Apna Way of Life’ which was striking. The products were launched by Mr. Ichiro Kondo who is the Managing Director of SMIPL (Suzuki Motorcycles India Pvt Ltd).

With Hayate Suzuki has cleared its intention of becoming a big mass player in India. And their show at the expo sneaked their intentions as they displayed almost there complete lineup available in India along with a few foreign showcases.

Right from the smallest electric scooter e-Let’s to the ultimate sports Hayabusa and the IntruderM1800R they had everything on display. We take you to a visual tour of Suzuki’s stall to ensure you do not miss out on any advancement which had happened at the recently concluded Auto Expo 2012 at Pragati Maidan Delhi.

First up was a White Hayate with flowing red stickers and it did look pretty good in this color. Powered by a 112.8cc air cooled, 4 stroke single cylinder SOHC engine, Hayate is Suzuki’s first motorcycle in this most voluminous segment. 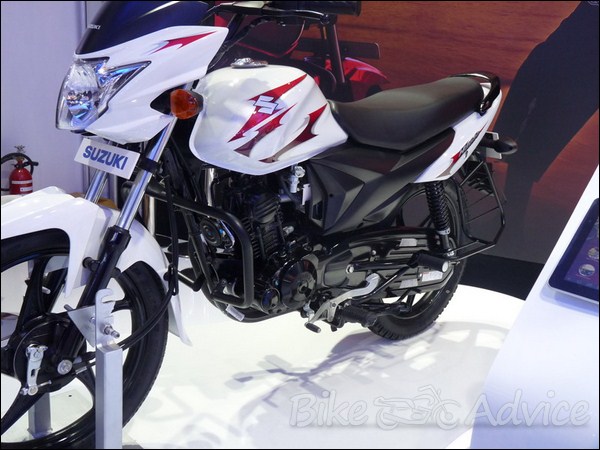 Though it is not a very famous bike in its segment but it still is a no-nonsense commuter. It is powered by a 4 stroke 124cc engine and is priced pretty well for its segment. 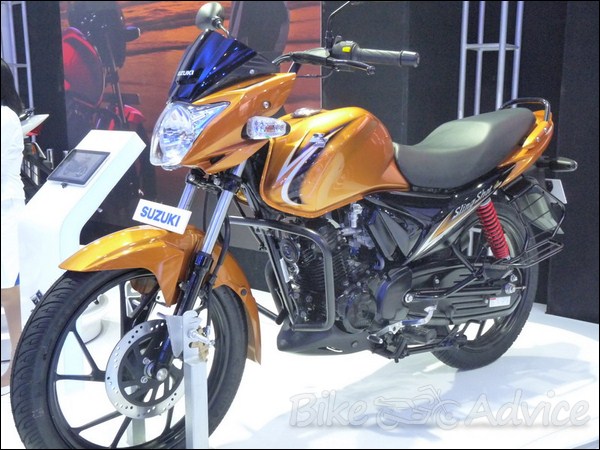 Seems like Suzuki is fond of white colors and the recently refreshed GS150R looked fantastic in white color. This bike, powered by a 4 stroke air cooled 149.5cc engine commands a lot of respect in this segment. 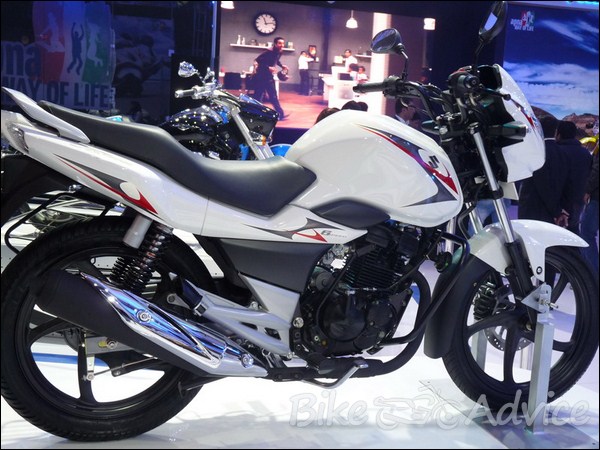 The smaller sibling, which is big enough to gulp down big roads, was launched in India not very long ago. In its own tune Intruder M800 looks fabulous. This bike is powered by a 4 stroke 2 cylinder 45 degree V-twin 805cc engine. It comes at an ex-showroom price of 8,88,000 Delhi. 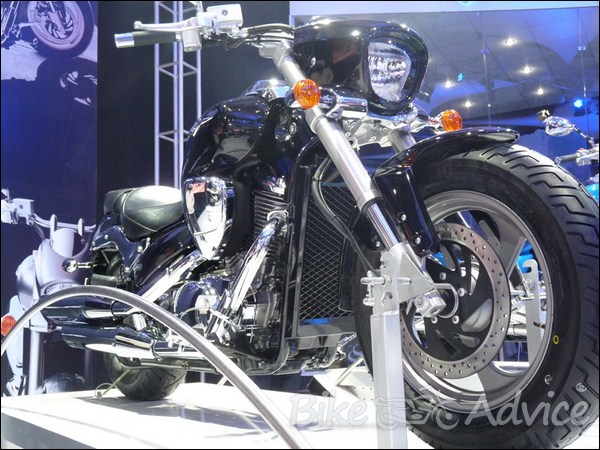 The big daddy of cruisers, Intruder M1800 is one big insane looking machine and in Blue, it made its own territory at the stall attracting everyone towards it. It sports a huge 4 stroke 2 cylinder liquid cooled 1783cc Vtwin engine inclined at 54degrees from each other. 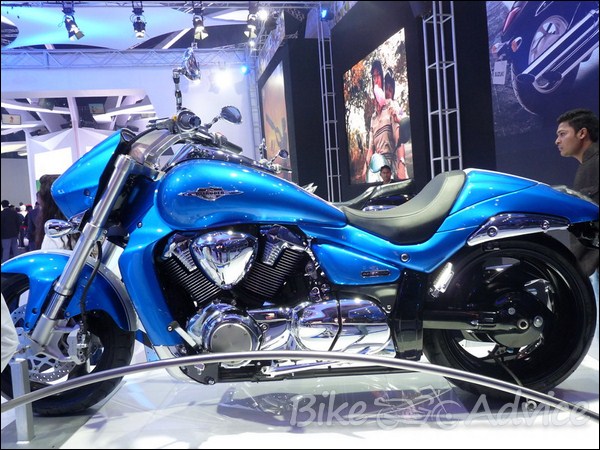 The powerpacked ultimate sports and probably one of the most famous big bikes in India, Hayabusa was displayed in two different colors – white and maroon. Powered by a huge 1340cc 4 stroke 4 cylinder liquid cooled DOHC engine which enables this bike to insane performance. This was once the fastest commercially available bike of the world. 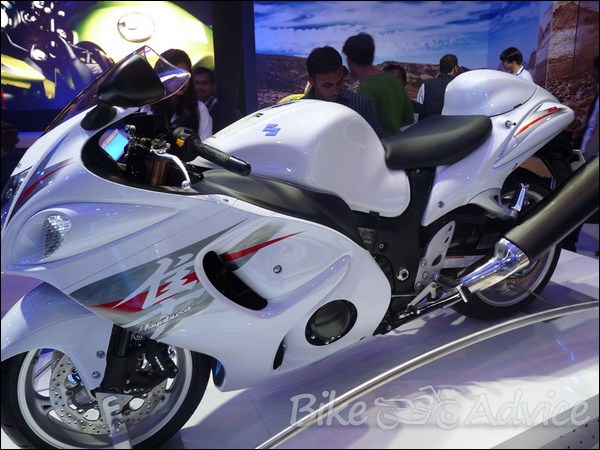 One of the most potent scooters in India, Access125 has a big fan following here. This family oriented 125cc scooter sports a 124cc 4 stroke single cylinder OHC mill which boasts very good torque figures for our kind of traffics. 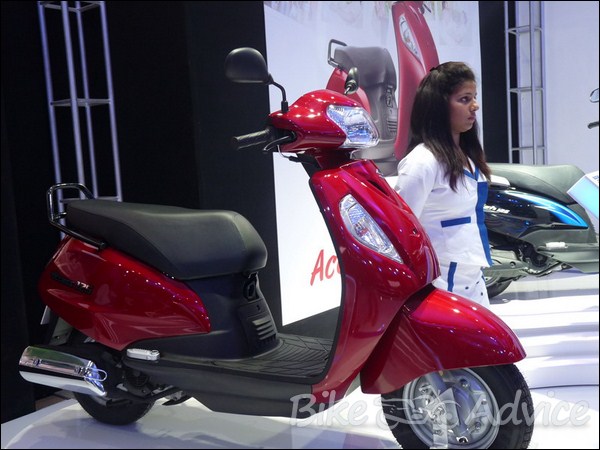 Completing the Indian lineup was the latest launch from Suzuki, Swish125 in sparkling Blue color. Sharing the same engine with Access125 under similar specs, Swish125 would strengthen Suzuki’s hold in the scooter segment. 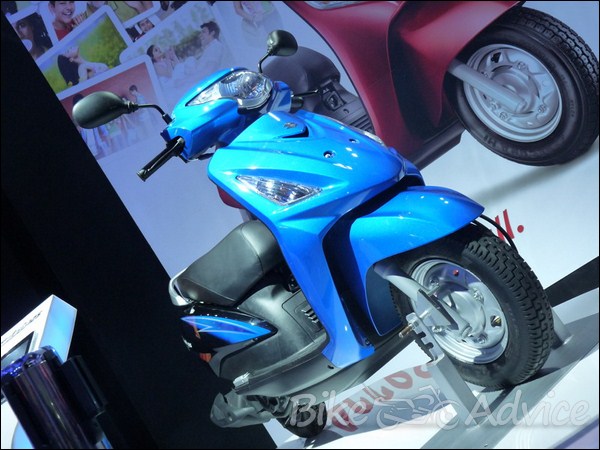 Then there was a revolving stand which housed and highlighted the latest mass market launches, Hayate and Swish125. Apart from these, Suzuki also displayed their cute electric scooter – e-Let’s, offroading metal – MX450Z, touring breed – V-Strom 650ABS and the naked monster GSR750/A which are not a part of India’s lineup and there was no word from Suzuki about these motorcycles’ possible launch in India. However, one big miss was the Bandit 1250S which was not to be found at the whole stall.

All in all it was a dedicated effort from Suzuki and its latest launches would surely make things interesting in our 2 wheeler automotive scene for sure.