Aprilia RS150 launch timeframe is not certain and a latest report reveals that it has been postponed. Story includes a few official words from the company’s CEO…

At the Auto Expo in February, Aprilia pulled up a big surprise; two actually! They kept on display two very exciting motorcycles at their stall – RS150 and Tuono 150 – both miniature models of their flagship motorcycles.

Scaled down version of the RSV4 is the RS150 and the Tuono 150 is the lower displacement model of the Tuono 1100! Both the motorcycles are powered by a 150cc 4 stroke, liquid cooled fuel injected engine capable of producing 18 hp of peak power at 10,000 rpm and 14 Nm of maximum torque at 7500 rpm.

Other noticeable features of both the motorcycles are 40 mm upside down front forks, 300 mm front disc with 4 piston callipers and 218 mm rear disc with single calliper, 100/80, 130/70 front and rear tyres respectively (both 17 inchers); ABS is standard and also on offer is a Quick Shifter as an accessory!

The difference is in the seating posture – with the low-set clip-ons the RS is out and out sporty in character with an aggressive riding stance, the Tuono has a rod-type raised handlebar and slightly forward-set footpeg assembly.

These are R15-rivalling numbers and Aprilia can place them, specially the RS, in the premium 150 cc space to present an alternate for motorcycling enthusiasts. This could be real competition after Honda discontinued the CBR 150R! Even if they can snatch a pie of the 6000-8000 units (per month) selling R15, it will be big for their scheme of things!

As per a conversation with one of the company official at the stall back at the Auto Expo, we were told that they were gauging public response and if they believe it is positive, they will work on making them ready for our market. 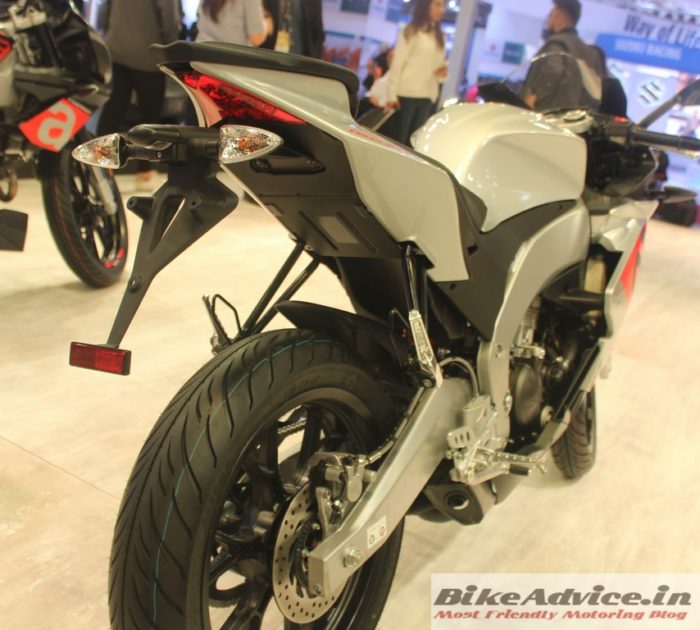 Back in March this year, Diego Graffi, CEO and MD of Piaggio India, talked about the motorcycles to AutocarPro. He said that the display models were prototypes which were designed in Italy. He added that these motorcycles could be “highly suitable for India and similar markets“. The biggest confirmation he put in was that – when (and if) these motorcycles will come to India they will be made locally!

An older report at Autocar predicted that the RS150 as well as the Tuono could be launched by middle of next year. But in a latest word they had with the company representatives at a recent press event (here), both the motorcycles are not coming anytime soon and their launches have been pushed to 2020 by the company.

Once and if they actually make way into India, they would be locally manufactured at Piaggio’s Baramati plant. Local production is the only way these motorcycles can be priced aggressively in India, otherwise it will be better they do not come here at all!

So, what are your views on the RS150? If priced around the same ballpark, will you buy the Italian over the Jap?