The German firm of Robert Bosch GmbH had been developing anti-lock braking technology since the 1930s, but the first production cars using Bosch’s electronic system became available in 1978. The early era did not have the kind of a technology and sophistication that we have right now. But for its time, the system was superior. But if we were to compare the earlier systems with today’s ones it would seem a bit OLD SCHOOL.

Right now, in Indian motorcycles we still don’t have the system. But in cars, yes we have it, but, at a cost, As we now know, ABS stands for Antilock Braking System. This is a device which avoids locking of wheels equipped with hydraulic brakes.

When Bajaj introduced disc brake system, they had a lot of troubles with the design which I guess was due to lack of knowledge. But Royal Enfield was the first to introduce disc brakes in India. They introduced this system in vehicle called Fury. Fury was launched by Royal Enfield Motors. The original company who made this awesome motorcycle was Zundapp. When they launched this powerful moto in India, it came with disc system. The disc system was from BREMBO Germany. One of the biggest companies specializing in disc brakes.

Fury had a very good and bad reputation in India. It was very good in speed but very bad in braking due to its Disc Brake system. At the, time the disc brake system was very much unknown to all our Indian friends. So it was much harder to use. People whoever bought FURY had many accidents due to the brakes. Why did this happen? Well the answer is simple: misunderstanding the brakes. Using the front or rear brake depends on the vehicle speed. It has to be in some ratio which we learn by our experience and judgement. Due to wrong usage, Fury owners had problems. But after this long span of time, this system began to be introduced on Indian motorcycles but without an ABS.

ABS comes with two different types. One is mechanical and another is ECU based. If I am not mistaken, the first motorcycle with an ECU controlled ABS in India and for Indian roads is CBR1000 by Honda.

The mechanical system works on pressure but continuously varies it according to the pressure applied by the rider on the brake lever. An ECU controlled ABS works in a smarter way because it is based on sensors and a processor which work together to vary braking force based on numerous information for the bikes systems such as throttle position, vehicle speed, angle of lean etc. It is bit complicated to understand.

Installing Mechanical ABS For Your Bike

But let’s talk about mechanical ABS. Its a good news to all moto lovers in India that an Indian based company actually manufactures Mechanical ABS systems themselves.

The system was introduced by company called EATA Plast Fabrics. And they currently manufacture Mechanical ABS for Indian motorcycles. When I saw the article related to ABS in “Bike India” magazine I was very curious to understand it. But since no one has ever got an ABS system in India which can be fitted to any of our Indian made motorcycles. I bought the system online and tested it on a ThunderBird Twin Spark and a Bajaj Avenger.

The result was amazing. I could instantly feel the change between both the brakes, I meant, without and with ABS. The bike can stop without skidding under hard braking. The system works 2-3 times per second. When rider presses the brake lever it applies variable pressure to the brake pads hence making sure that the brakes maintain maximum pressure while keeping wheel lock aside on any surface.

But it depends on vehicle speed. If the speed or load of the motorcycle is high then the system works faster. That means the system is activated 2-3 times every second the brakes are applied. This system is relies on some mechanical spares. The unit is quite small and can fit onto any motorcycle without any alterations or changes. You can roll back to original if you don’t want it. 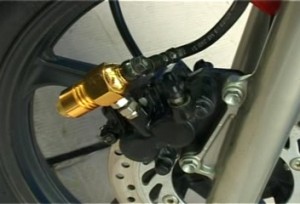 The only catch is that Bajaj vehicles need different spares for ABS, but for other motorcycles all the spares are same. Bajaj has got a different threading style. So EATA Plast Fabrics provides spares for that too. You can order ABS online through www.SafeRideABS.com or can order from me also.

The price tag is very reasonable which is M.R.P.1250/- without shipment charges. The price tag on site is included courier charges. Rest of the information you can get is from their website. This system is not suitable for foreign motorcycles. Get it as fast as possible and fix it from your skilled and professional mechanic.

Friends, remember one thing this system is not an entertainment plug in. It is A Guaranteed Hardcore Safety Device, In effect, you can brake on any surface, be it water, mud or gravel, with full force at any speed without having the fear of locking the wheels and crashing.

Do not hesitate to buy. The installation guide is packaged along with the unit, if you have any doubts feel free to contact me or you can contact the concerned company directly.

In this video you can understand the bottom line difference between two motorcycles with and without ABS each. Courtesy of Honda.