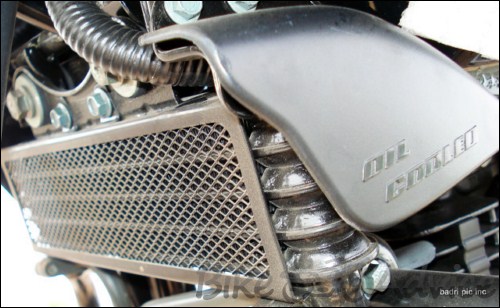 Air Cooling vs Liquid Cooling – What is the Difference? Story bumped up!

I was never as big a motorcycle enthusiast as I am now. If I go back a few years in my life then my whole interest/opinion about motorcycles was way different than what it is currently. Like the general junta, at that time I was more concerned about which new bike is being launched, what is the engine capacity and what is the power rating – basically the glamorous superficials! I was least interested to know how this power is generated or what technologies go in making the motorcycle work.

Back then it was mostly about small engines, majorly led by Hero’s 100 ccs (Hero Honda then) which came equipped with conventional air cooling. But when Bajaj introduced its bigger Pulsars with ‘oil cooling’, followed by R15’s ‘liquid cooling’ we started getting global technology in India.

It is very interesting to learn how engine cooling works and we will discuss the various ways manufacturers use to achieve this, in simple terms.

For a smooth running of the engine as well as to maintain an optimum performance, the engine needs to be cooled down, and this where the ‘cooling tech’ comes into the picture. There are three categories we can classify engines based on the cooling method employed…

As the name implies this type of engine uses air as the cooling agent. This is the most common form of engine cooling and is available on majority of Indian bikes. The engine cylinder is surrounded by fins on the outside as you can see in the picture below. These fins facilitate cooling by increasing the surface area which is exposed to air for cooling.


Pros: Air cooled engines are easier to manufacture, are cheaper and pretty easy to maintain. They are generally used for low capacity bikes where price is a concern and when high performance is not an important requirement.

Cons: Least efficient of all and hence can not be used in high performance engines 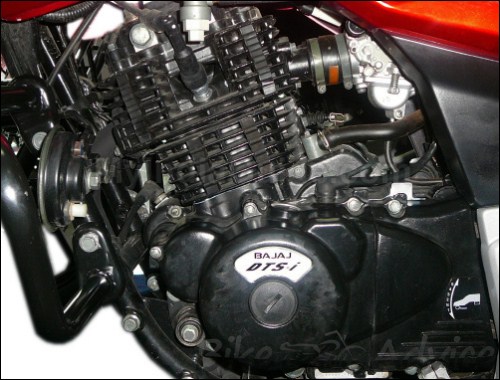 This type of method is very primitive and the engine gets heated up pretty quickly if it is continuously run on higher rpms. The performance of the motorcycle decreases if the engine becomes hot and running a very hot engine may even result in engine seizure as well.

This type of tech was marketed and made popular in India by Bajaj when they introduced it on their bigger Pulsars. We already know that engine oil is circulated within the engine when it is running, and along with the engine the oil also becomes hot on running and starts loosing its viscosity (in simple terms – thickness). This has a direct impact on its lubrication capability.

Thus, if an engine is running on higher temperature the oil becomes thinner and with the reduction in lubrication, friction between engine parts increases.

To avoid this, and to make sure that oil maintains an optimal operating temperature; the oil is circulated between an ‘oil cooler’ (pictured above). This oil cooler is cooled by the flowing air and it cools down the engine oil. This cooler engine oil is again sent back to the engine via the other jacket.

This process brings down the operating temperature of oil and helps in maintaining its viscosity. In essence, oil cooling is just air cooling with an additional cooling mechanism.

Pros – This is more efficient than simple air cooling. It is cheaper as well as technologically simple and easier to maintain.

Cons – Not as efficient as Liquid cooling and can not be installed on high performance engines.

This is the most popular method being used by almost all the high capacity machines in India and abroad. The concept of ‘Liquid cooling’ in motorcycles is very similar to what it is in cars. It ensures stable performance at high speed riding, on up hills, in traffic jams etc. A liquid cooling system uses a web of passages around the cylinder to circulate coolant through. 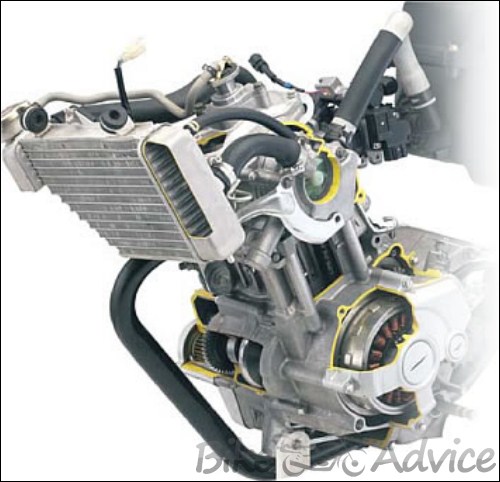 This coolant absorbs the heat produced by the engine when running. Under high performance conditions like engine running at a higher rpm, the engine gets hot quickly; this results in the temperature of the coolant to rise.

The coolant is then sent to a radiator which dissipates the heat by running air flow or an electric fan. This cooler coolant is then circulated back around the engine. This constant circulation of the coolant keeps the engine temperature under control.

Cons: They are costlier and complex to make. Relatively costlier to maintain as well.

Air Cooling vs Liquid Cooling – There are obviously other facets and deeper details on this subject but this article is intended to provide the basic understanding in as simple a language as possible. Probably, a more comprehensive story will follow sometime later…