Gautam has submitted this review in our Ownership Review Contest No 13, ensuring himself an assured prize. The contest also offers a chance to win Riding Jacket, Helmet and more.. You can submit your review to us as well before 23rd Feb. Here are all the details. 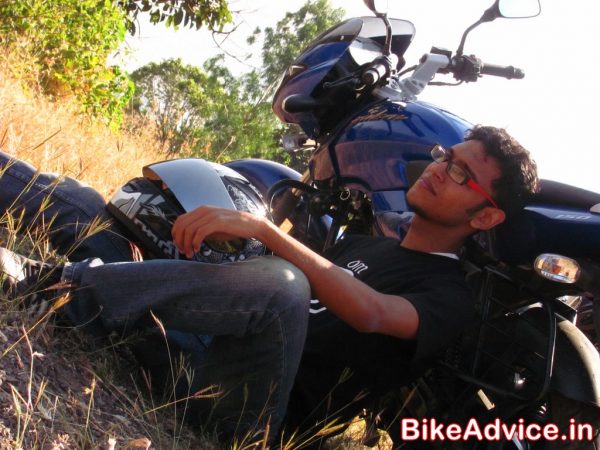 My Biking dream started when I was in the 8th grade. My friend’s dad wanted to sell his TVS Victor and insisted me and my friend learn how to ride a bike. Since then, anything with two wheels and a motor steals away my attention. But the true biker in me was born when I started riding my uncles RX100. The sheer pleasure in riding the RX …. Just cannot express that in words
So on graduation when my parents wanted me to have a two wheeler, I had a few options in mind (I had made up my mind to go for one in the 150cc segment) which included the YAMAHA FZS, BAJAJ PULSAR and HERO HONDA CBZ EXTREME.

YAMAHA FZS had a splendid performance and the reviews were quite positive. The broad tires, naked hooligan look was all in mind but it was out of my list owing to the after sale servicing and high maintenance cost. Although I was convinced to buy the CBZ extreme after the test ride, but the looks of this bike somehow did not appeal and the review from riders that it lost its agility and ride quality after a few thousand kms. Bikes like Unicorn and GS150r never made up in my list.

So finally after a few weeks of research and discussions with experienced riders, I decided to buy the Pulsar 150. Pulsar 150 best suited my requirements over the other high powered pulsars owing to my daily city riding and concerns about mileage (that was actually because of rising fuel costs and nothing else). 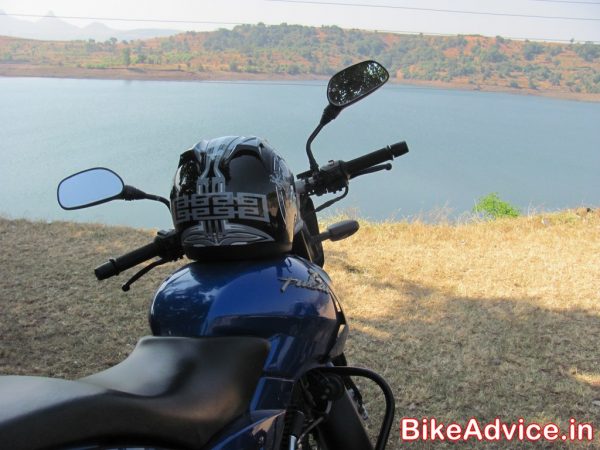 So when in the showroom, the sales guy was busy blabbering about the qualities and pros of the bike, my mind was all over this machine. As simple as it could be yet the stylish outlook. This bike had truly impressed me in just the first look. It had all that I would have admired in a bike I wanted.

A 150cc engine (actually a 149cc displacement), a digital console, 17 inch alloys with MRF zappers (which are still respected due to the best handling on corners), Nitrox rear shock absorbers and telescopic front forks (best I could have asked for a comfortable city ride, and by city ride I mean ride on the roads of MUMBAI which are as good as the tracks of Silverstone – an exact parody of the BMC’s claim.)

So it was November 2010 when the surprising day arrived. While everybody choose a Black pulsar (the ‘Midnight Black’ with overall black tone looks kickass) while some stood to the Red; I choose to go for the ‘Plasma Blue’ for two reasons – Firstly the color seems to be distinct out of the other color options of the Pulsars, and secondly it would be absolutely unique with lesser number of machines with that color on the road.

The Signature color advertised by the pulsar was Black, Blue looked equally killer. Though this color choice made me wait for a month for the delivery I was more than happy to wait to get my desired choice. So when I had the machine in my hand, I practically lived with the bike. Yea that could be out of excitement in the initial days, but I am surprised that feeling has still not surpassed. There has not been a single day since the day I had my Pulsar that I haven’t been riding it. Even when it used to rain, I would make it a point to at least rev up the engine to keep it in good shape.

So, to start with the review which comes exactly at the 3rd birthday of my bike, all in all it has been a pretty good machine. The makers claimed it to have a healthy mileage of 55-60 kmpl. I would say I’m absolutely happy with the way things have turned out. Even after 3 years, on highway, Pulsar when ridden in ‘standard speed and acceleration norms’ would very well give a respectable mileage somewhere close to or above 50kmpl which I would say absolutely meets my expectations. 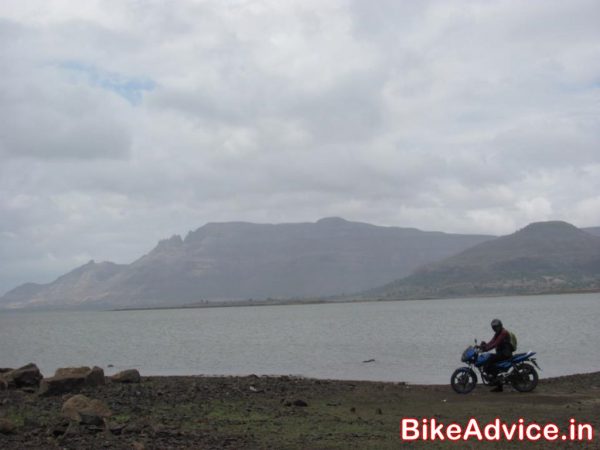 Secondly, the market expectations of low maintenance cost, also has been quite decently met. I can proudly say that my Pulsar has been practically maintenance free (that would obviously be excluding the regular servicing cost). Only with the mandatory changes after the specified kms, (that is the fork oil, brake fluids, air cleaner element etc.) I haven’t shelled out a single penny on other break down cost or replacements of any sorts.

The bike has been in superb condition primarily of the fact that it has been single hand use and secondly that I haven’t missed out a single service as per the schedule. The rule goes this way “the better care you take of your bike, it loves you back in the form of better performance”.

Finally, The exact verdict of the entire review that will follow later.

Though I haven’t been much of a racer, have tried out a few high speed runs on my “BLUE BUZZ”. Taking it upto 111 kmph in order to buzz out through the open highways. I have been pulling up regular rides to nearby places stretching upto a 300 kms of return rides in a single day. 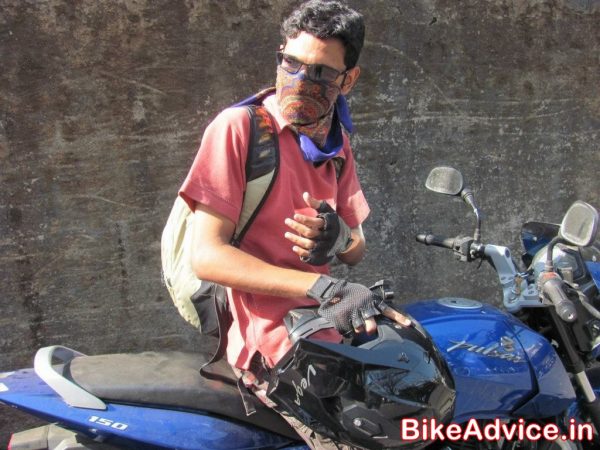 The most amazing ride being to the wonderful dam on the hill station Bhandardhara. On a cold December morning, piercing away through the heavy fog on highways, jaw freezing temperatures (that’s for Mumbaikars, since it ain’t that cold here in suburbs all round the year). With my biking buddies and a proper riding gear from helmets to camelbacks, it happens to be one of the most amazing rides I have had.

Other than that, regular cross city rides to Pune, Nashik have been regular ones on the bike.

The utmost important quality that a bike should have now a days is the looks. The P150 has a appealing outlook. When the blue pulsar ‘buzzes’ out on the road, there is a sure nod from the onlookers; Scoring a perfect 10 on the looks department. The little disadvantage is the single seats and not the split seats. Otherwise no complaints whatsoever. The Pilot lamps look cult in evening dusky lights. The extra mudguard on the rear tire completes what was missing. The digital console is like icing on the cake.

The clip-on handle bars have been an excellent addition to the new series of Pulsars. Just what is required for giving a sporty feel. Truly excellent on cornering and hands on when it comes to tackling the traffic hit roads.

The MRF Zappers is like the hand of God in terms of tires. They stick to the tarmac as if if it were those hot Pirelli tires on a circuit. Gives immense stability on corners and excellent handling in case of urgent braking. The brakes on rear (130mm drums) would be rather upgraded with discs which would have even enhanced the braking capabilities. The front disc brakes seem to do a decent job and are fairly okay. 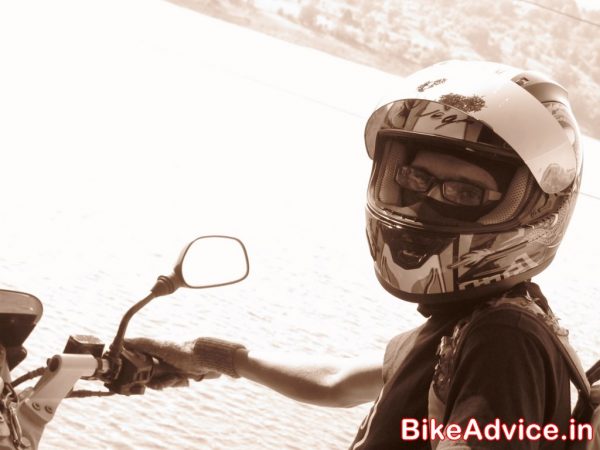 The engine is as smooth as it could be. After 3 years and almost 14k kms, its still as smooth as it was the very first time. When it runs down the roads on normal 4k rpms, its smooth as like a hot knife running through butter. Other than that, the gear box might seem to be a little witty.

There is a weird sound that comes on gear shifting on 1st and 2nd gear. Even the mechanic at service centre has not been able to solve this and seems to be unknown about this fact. (though when I consulted my friend who owns a P220, he seems to disagree and says there is no such problem in his bike). Also, the vibrations and wobbling is fairly more at high speeds and over 8k rpms for which there is no remedy yet. (atleast I don’t have any answer for this problem).

The performance in terms of mileage, I would say I am more than happy the way things have turned out. 50kmpl on city roads and somewhere around 53-55 kmpl on highways. When in proper riding conditions (like following speed limits and timely gear shifting) the performance is highly satisfactory.

The service is one headache you will have to go through if you are in Mumbai and you wish to get your bike serviced from authorized service station. They will un-necessarily advice new parts to be put or replace parts without being required, or the service quality is totally unsatisfactory. I have had to go to service station because the mechanic simply forgot to replace the engine oil. Now that’s worst publicity for a mechanic /service station. 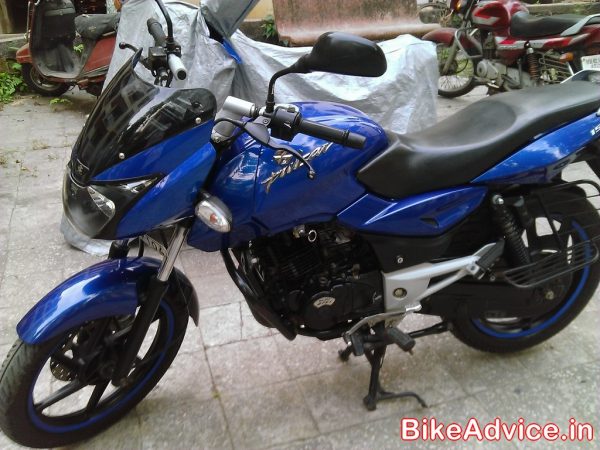 All in all, if wondering whether I bought a peach or a pair… I would say I had an amazing cocktail with both advantages and its relevant disadvantages as well. But it is a commendable task that ‘Bajaj’ has done with its upgrades and maintaining the market leadership. Proudly, I am a PULSAR OWNER and fairly happy with the way its buzzing.

Thanks guys for sparing your time and reading my story. Ride hard brothers….Ride Safe! And please follow traffic rules & most important use ‘certified’ helmets while riding. Peace \m/