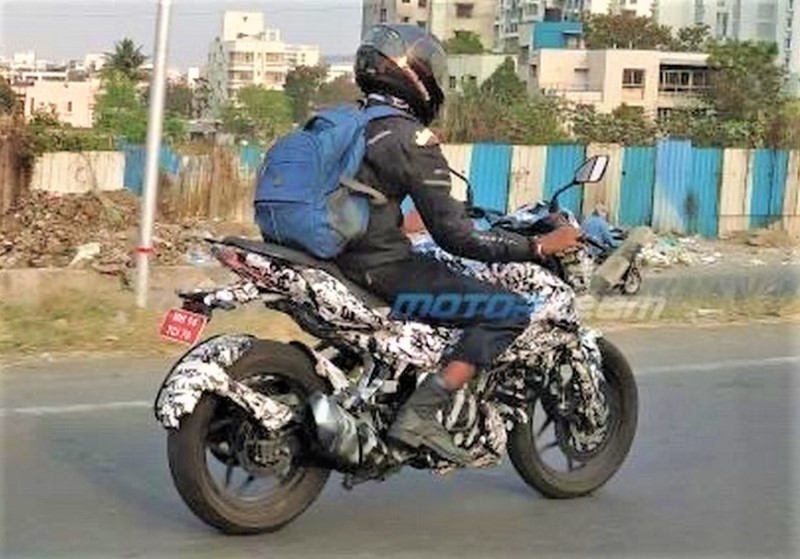 Continuous 2022 Pulsar spy pics suggest that Bajaj is speeding up the process. However, we are still skeptical if this is the 250cc variant…!

Bajaj is aggressively testing its new generation Pulsar on the Maharashtra roads. The motorcycle was first spotted testing last month and it has been captured yet again.

From the angle of this lone pic, there is a very subtle hint of Apache 310 from the rear section. While there are claims that this would be the Pulsar NS250, however, this theory just does not fit in the puzzle.

This model is being tested with an air cooled engine. The current Pulsar NS200 sports a liquid cooled motor. Chances of a bigger motorcycle getting downgraded technology are almost negligible. So, we still believe this is a smaller Pulsar under tests.

It carries a similar looking but different headlamp design, extended tank scoops and a pointed tail. There is a big engine guard along with a short exhaust canister. Currently, both the Pulsar NS200 and NS160 come equipped with an underbelly exhaust, so that here is the distinguishing factor.

Since the model is out on the roads testing, chances are that we may get to see it getting launched sometime this year. However, before that we must get some concrete details about its cubic capacity and where is Bajaj taking its Pulsar brand next.