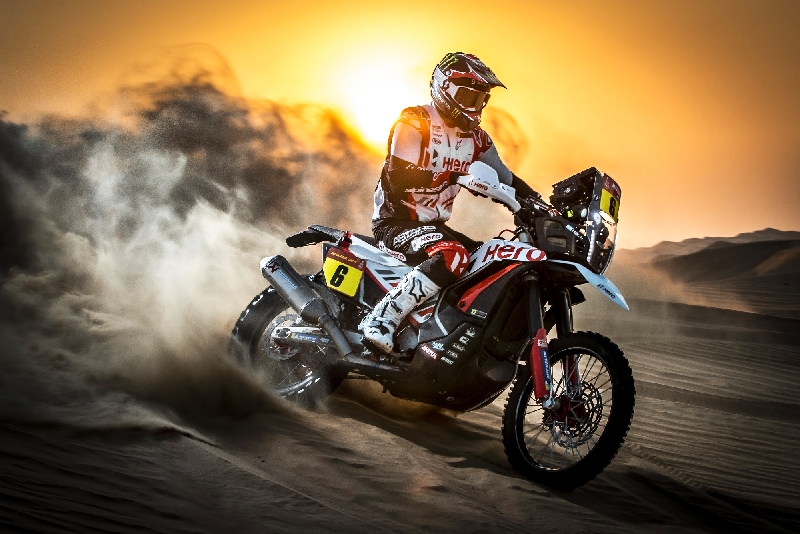 2022 Hero Dakar Team sees a new inclusion. It will ride the new 450 Rally Bike that has been improved in a lot of parameters…

Hero MotoSports – the motorsport team of the world’s largest manufacturer of two-wheelers, Hero MotoCorp – has had a wonderful run this year clinching two podiums at the FIM Cross-Country Rallies World Championship 2021. And riding high on this achievement Hero MotoSports has unveiled their plans for entering the Dakar Rally in 2022 for the Sixth time in the row.

For their conquest in Dakar Rally 2022, Hero MotoSports has chosen Joaquim Rodrigues and Franco Caimi as their riders to conquer the most gruesome rally event where nearly half the participants don’t even finish the race every year.

Both of these riders have achieved podium finishes in the Cross-Country Rallies Championship this season – Silk Way Rally and Abu Dhabi Desert Challenge respectively – with Joaquim finishing the Championship in fourth position.

It will also be the sixth Dakar for JRod (Joaquim Rodrigues), who has been with their team since its inception in 2016. However, it will be the first time for Franco Caimi in Hero MotoSports colors, following his signing in April 2021. Not to speak less of him, Franco is no stranger to the Dakar, having participated in the Rally on five previous occasions.

With five years of experience and impressive results in international rallying under their belt, Hero MotoSports has earned a well-renowned name in the global racing circuits. The year 2021 has been a significant one for the team, as the riders made their way to podiums in various rallies throughout the season.

The duo of Joaquim and Franco will take on the challenges of the Dakar in Saudi Arabia astride the Hero 450 Rally bike, which the team claims now offers improved top speed and acceleration.

Dakar 2022 which will be the third consecutive edition in Saudi Arabia, will run for 12 stages over 14 days. The rally will kick-off on January 1, 2022 with a short Prologue stage, and then travel through various cities across the length and breadth of Saudi Arabia.

A rest day in the capital city of Jeddah on January 8 is the only respite that the competitors will have on a route that covers 3400 kms of racing distance.

Covering a total of 8000 kms, including the liaison stages, the competitors will return to Jeddah for the finish podium on January 14, 2022. A total of 430 vehicles are expected to hit the start line, with 149 of them in the motorcycles category.