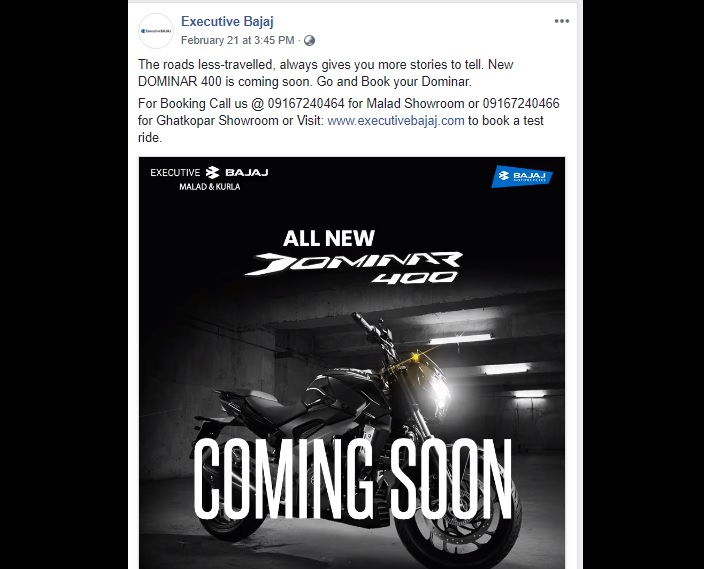 2019 Dominar bookings opened by some dealers; Launch expected in March

It has been updated at the official website, has featured in the new brand commercial but Bajaj, for some reason, is not releasing the information on 2019 Dominar 400’s launch.

While we still do not have any official confirmation from the company but few dealers have started accepting bookings for the upcoming motorcycle. Executive Bajaj, an authorised dealership in Mumbai, has announced the commencement of bookings at their official Facebook page.

We do not have any official date yet but according to the information on the internet the 2019 Dominar 400 would be launched sometime in the month of March. So, if you have been waiting for the motorcycle for the last few months, it appears that we are close, very close. With this we await the official invite from Bajaj.

It must be known that 2019 Dominar 400 is expected to be projected as a more premium motorcycle and hence expect a price increment which could range from Rs 10,000 to 20,000 on the ex-showroom price. To justify Bajaj is loading it with features such as Upside down front forks, new dual barrel exhaust canister for a better note, new split instrument clusters which will display more information etc.

On the mechanical front, the new Dominar 400 may get the DOHC (Double Overhead Camshaft) setup from 390 Duke. In a DOHC setup there are two separate camshafts – one for intake and the other one for exhaust valves. Current Dominar 400 gets the cheaper SOHC (Single Overhead Cam) layout which means there is only one single camshaft which works for both the intake and outlet valves. However, this has NOT been confirmed so far.

But what has been confirmed is that the upcoming motorcycle will churn out a significantly higher power output, providing more juice and may be more sprightliness in the initial and mid revs. Here is how much it produces…

Apart from the new Dominar, Bajaj is testing three more very exciting motorcycles for our market. Check them here…