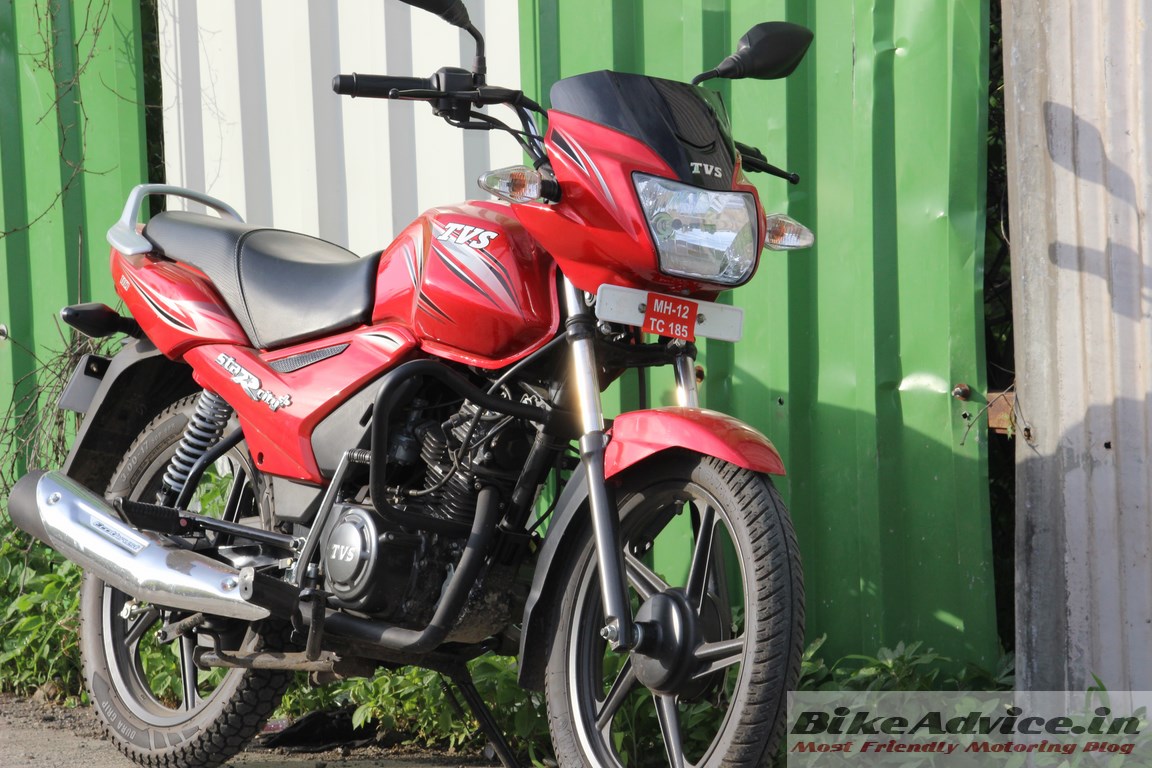 Just a couple of days after we tested the Discover 150F (& 150S), we were handed over the keys of TVS’ refreshed 2014 Star City+. Testing bigger bikes is relatively easier because we have a lot to understand and talk about. However, smaller bikes of this capacity are predominantly centered towards creature comfort and point A to B commute. We asked ourselves where should we begin? We decided to take the bike in parts and for some section of this test we went Rural. 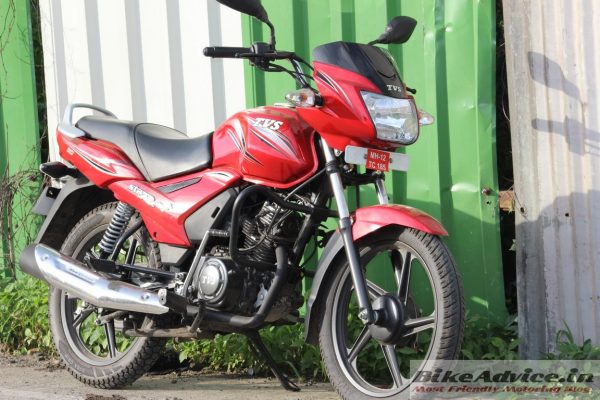 Another 110cc motorcycle to acquaint ourselves to and talk about and then we’d be penning our findings for you and publish them over the next few days. However as we treaded along we were in for a special surprise, read on…

We kept the bike for a few days to be able to understand the new bike and we only had two predominant questions to answer – One; how has the new offering improved over the old and two; how does it stand vis-a-vis the competition?

At first sight the Star City Plus does quite justify its name. It does have a premium look and feel for the 44,000 price tag (Ex. Showroom in most cities). The plastic does seem to blend in well with the bike which looks bigger than a lot of its rivals. New City+ looks sharper and has some muscular cues running across the motorcycle. 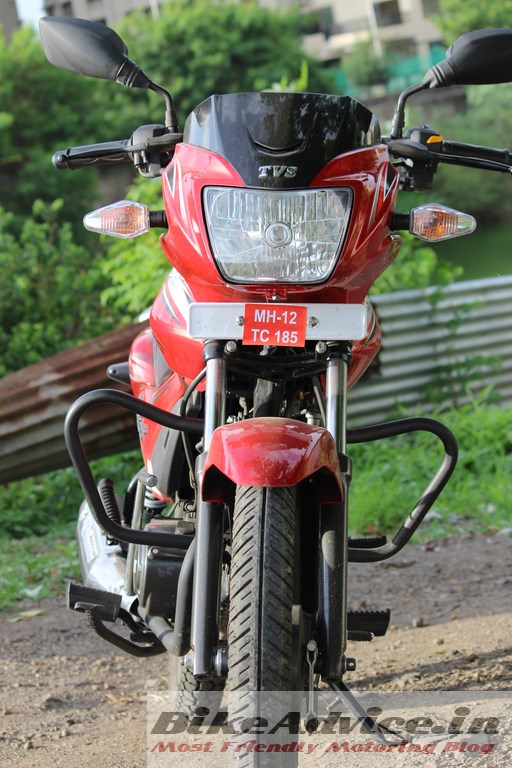 The headlamp, though looks a little old, gives way to a nice broad tank, contoured seat and a relatively sharper tail. The all-black theme for the alloy-wheels and engine on the red colored motorcycle we had for tests looked fairly complementing. The upswept exhaust with that chrome-plated shield also adds to the masculinity.

The riding stance and road presence is pretty decent and though we can not really say that it (or any other 100-110cc cc motorcycle) is a sheer head turner, it does come close to being one of the most composed lookers in this segment. 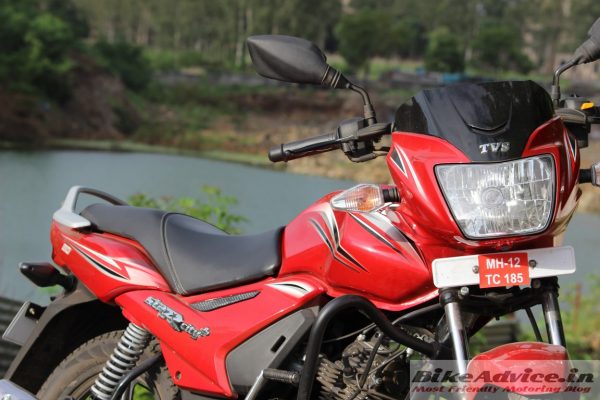 Talking about build quality, we must say TVS has done a fantastic job. The bike looks pretty well put-up and just to draw a comparo, possesses almost twice as better build quality as the Discover 150 twins we rode a couple of days earlier.

For the first impression factor the TVS Star City Plus reads up a digital analog display with service indicator. The base model is bereft of the Start button. However, we did try to kick start with the half-kick strategy and this little fellow does come to life and the starter kick is also fairly soft. 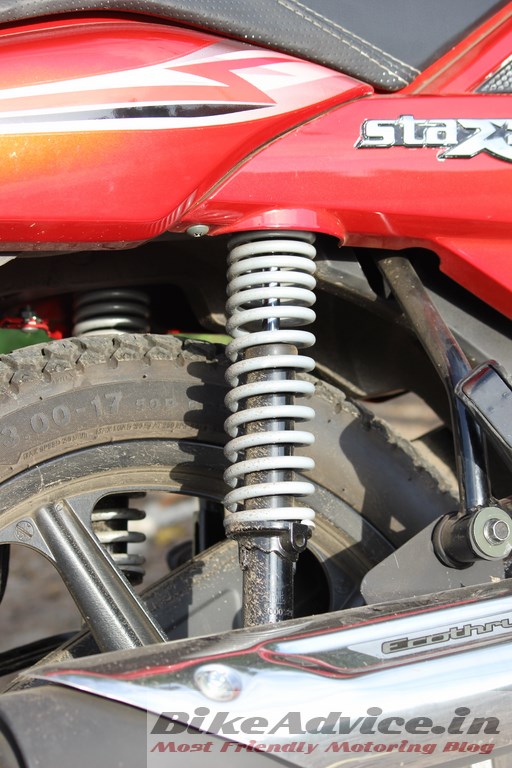 The dual-tone seat is aesthetically good but in practicality, a little too soft to our liking. Under seat has space for tools, documents and may be a 1st aid kit (the toolkit and any other accessories were not part of the test mule given). 35 watts Low beam and upper dipper provide a fairly decent amount of illumination. However, the Pass-light switch of this motorcycle was not working at the time of this test and could have been better designed. Rest of the switchgear exude quality including all the other buttons and knobs… 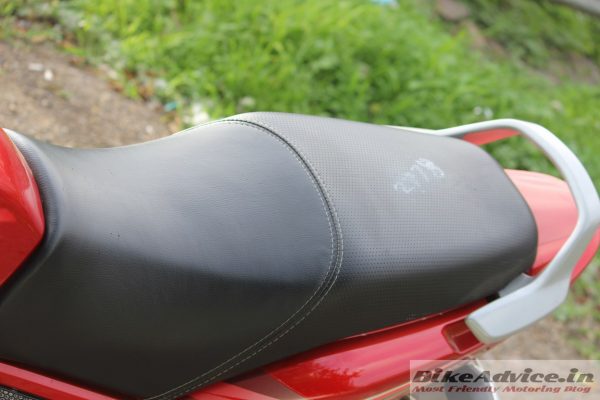 Also for those who miss the good old slot for a handle lock they have a groove to lock their steeds with the humble pad locks used for houses. Thus unless the thief can figure out a way to pick the lock he is better off not messing with your ride! 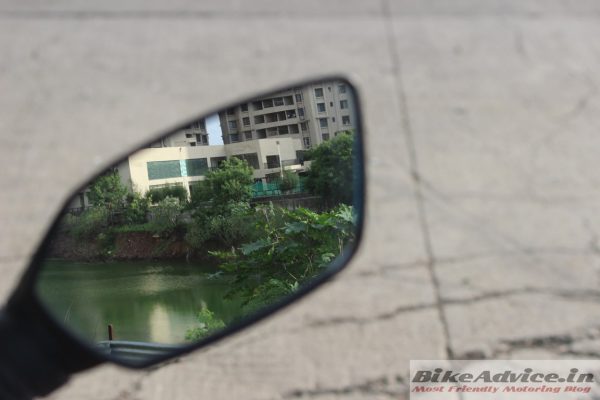 Like other motorcycles of this segment, the seating posture is upright and very comfortable. The view from the RVMs (rear view mirrors) is wide and engaging the main stand is effortless as well.

While our editor put the humble motorcycle through a lot of city and highway rides, I attempted to see how would it perform in a rural setting. The Power and economy modes of the Star City+ are reminiscent of the good old Victor and while the bike was kept on idle it seemed to switch to power mode automatically (just on the console though). 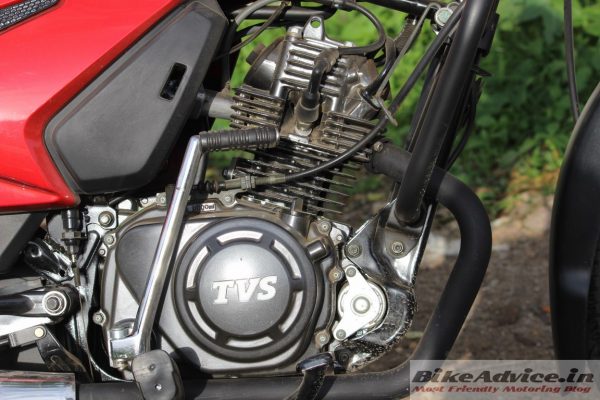 The gearbox was just about decent, shift lever was a tad bit short for those who want to use the toe shifters. However, the motorcycle felt fairly responsive for all city-riding speeds. On the highways and longer roads, as expected, this 8.4PS single cylinder 109.7cc mill does run out of breath and it needs time for climbing up speeds over 70-75 kmph. 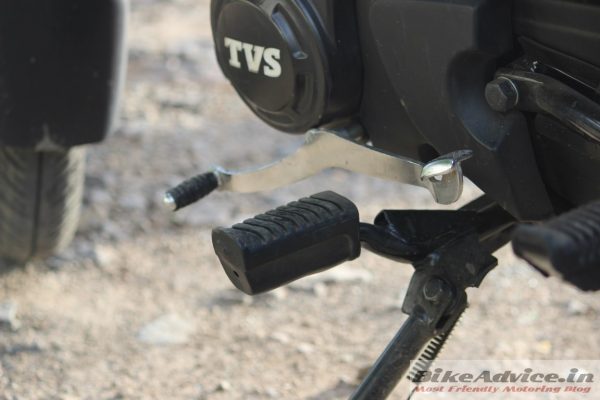 The low and lower-mid range is impressive and you would be more than happy nudging this motorcycle inside cities. But what is most impressive is the refinement. For some real good reason, latest TVS bikes are real competition to all the modern motorcycles you see these days on the roads. The new Star City+’s small motor is interesting to ride on speeds between 50-70kmph which is where it is smooth and fairly relaxing.

TVS claims a rated fuel efficiency of 86kmpl obviously under test conditions. In our tests this motorcycle returned about 60kmpl in cities and about 5 kilometers per liter more on highways.

We are neither fans of TVS tyres nor motorcycles which do not come equipped with drum brakes. The Dura Grip tyres felt just about okay and in line with the competition in this segment. Braking was also just average for regular rides and as expected for non-disc bikes. 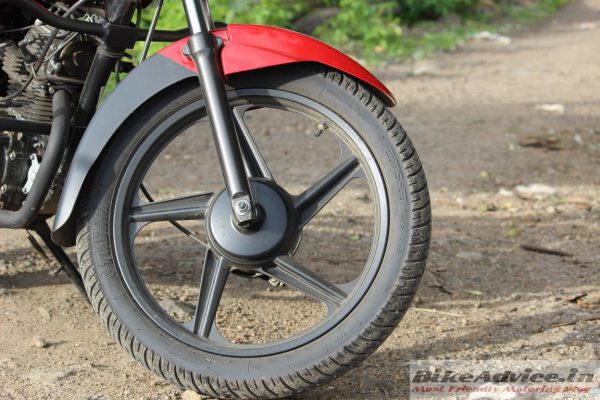 Suspension is set on the softer side and while it may be a boon in cities, it is just decent under high-speed cornerning. It tip toes over potholes with the finesse of a ballet dancer. We floored the throttle to an average 30 kmph and it never flinched on the dirt track that we threw at it. Given its price point for the top end version too this could be a sleeper hit with the rural users who will be pleasantly pleased with comfort it has to offer. The test subjects that were asked about the comfort factor as a pillion gave a positive response in favour of the TVS Star City Plus as well.

In its new avatar, the 2014 Star City Plus did leave us very impressed at almost all pointers that matter for a bike of this segment. It has a refined engine, smooth drive, fairly handsome personality and good poise on the roads. 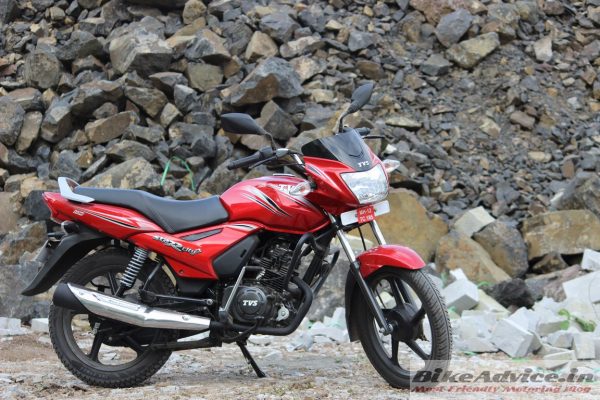 It behaves well on city roads as well as rural tarmacs and is priced pretty well. At a little less than Rs 42,000 (Ex-Delhi) you also get a lesser version which doesn’t get the electric starter.

We would rate this as a very competent and VFM motorcycle in this segment and on a scale of 10, I would give it a clean 7.5 for all what it offers, a 0.5 deduction for the absence of disc brake variant and a couple of niggles our test motorcycle came with.

That 3D emblem is the most prominent mark on the motorcycle 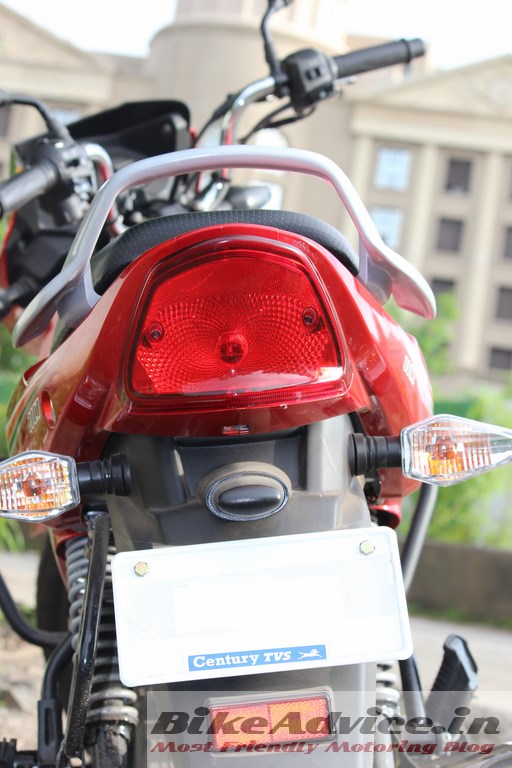 Along with the front, the rear looks a little dated 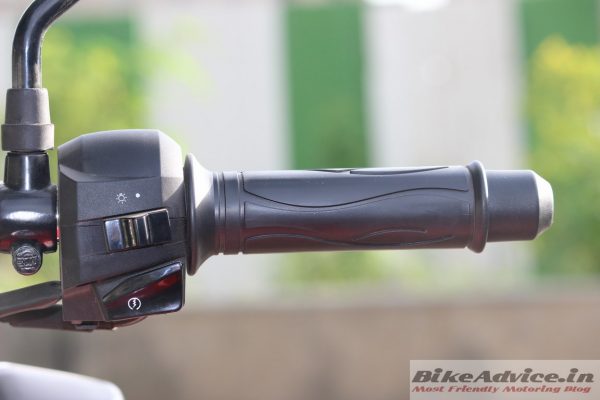 Grips are and feel premium. Notice the vibration dampers 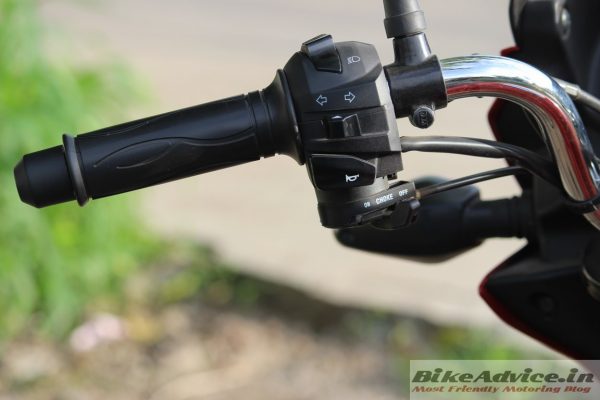 Notice the switchgear quality. It has good-feel buttons 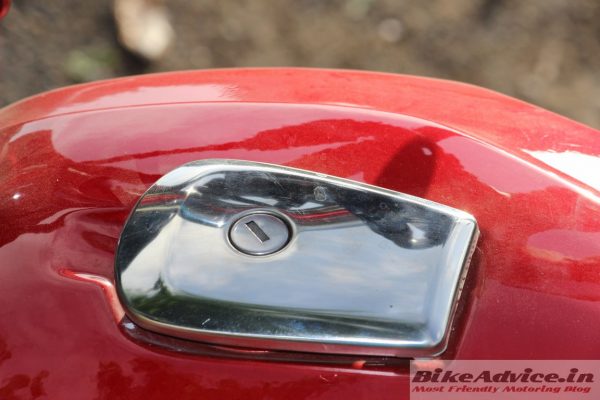 For some reason, the default location of this keyhole is slanted. Not a big thing but — WHY..? 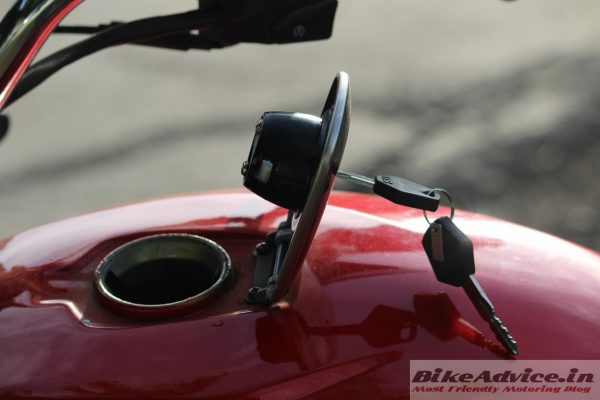 This again should open the other side for ample amount of space while filling petrol. 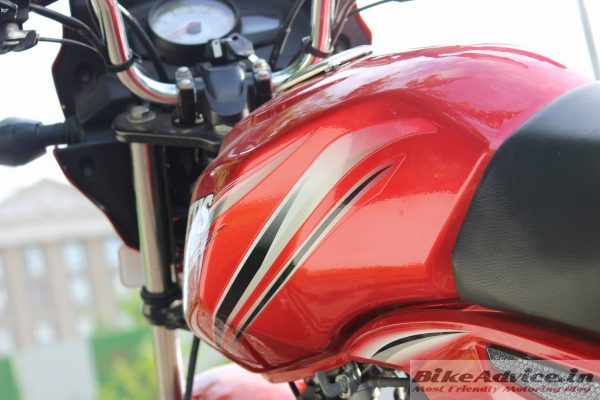 The muscular lines and the side stickers. Not overdone! 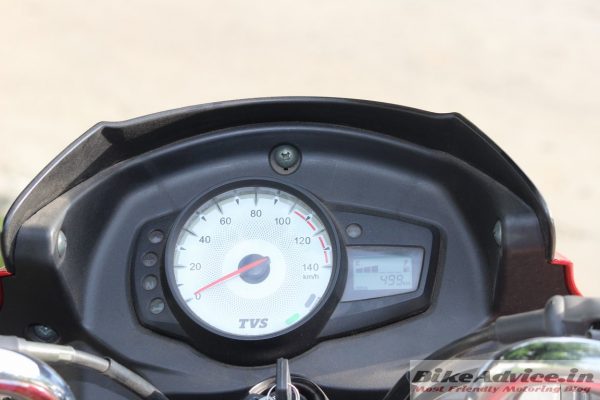 Shock absorbers are grey colored and on the softer side 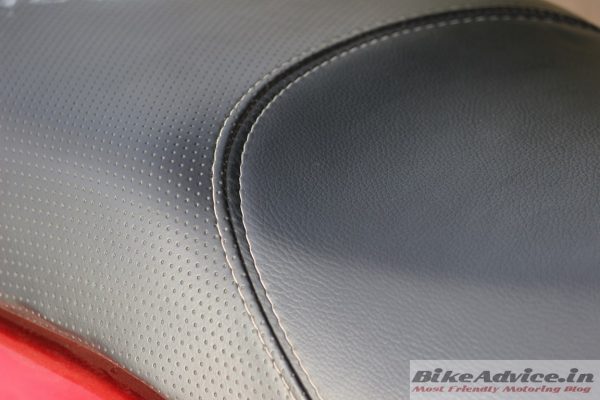 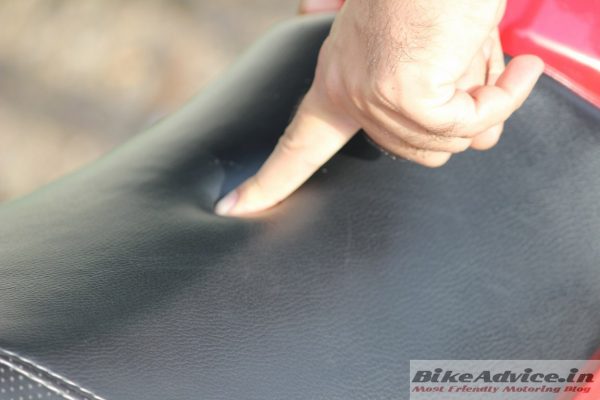 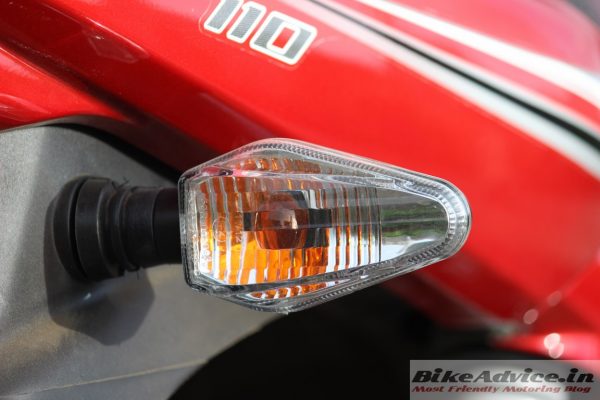 Clear-lens side indicators are big and clearly visible 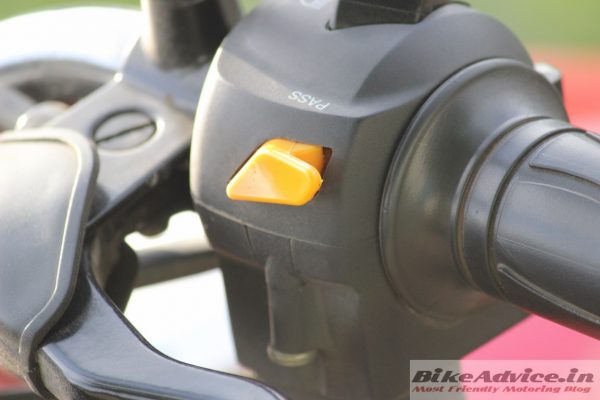 This little yellow fellow (it rhymes 😉 ) did not work on our test bike. It could have been bigger as well

Not that we intended to show the small lake here, but the RVMs are actually wide and have a nice coverage 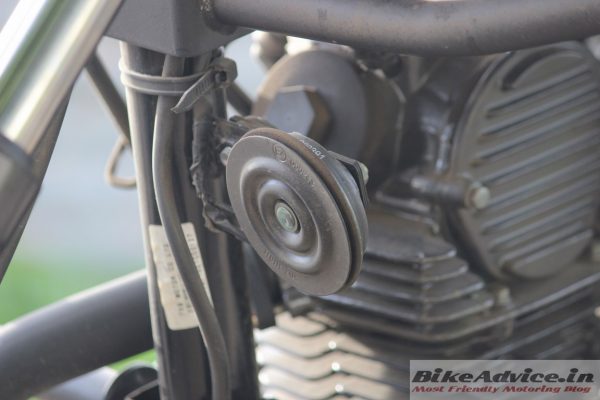 Single horn is feeble. Does the job inside cities but on highways you expect more.. 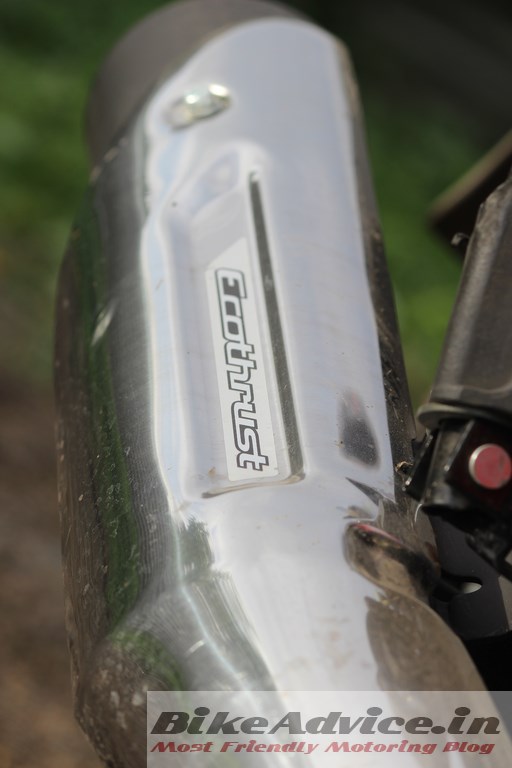