It’s been pouring upgrades and facelifts in the Hero Honda’s stable. A week back, Deepak and I were discussing about these bikes and that is when, we decided to road test these bikes for our readers and throw more light on them. You saw a few images of 2011 Hero Honda Hunk uploaded by Deepak recently, Right? That’s the same bike I test rode for BikeAdvice. 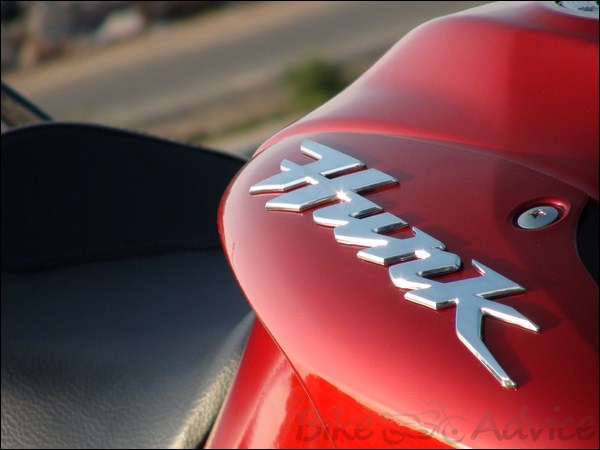 I own a Yamaha Gladiator and when I took the delivery of my bike a couple of years back, I still remember the analog  speedo cluster showing that the digit 8 in the last part of it which meant that my Gladdy had run 0.8 km before I kept my hand on her.

But, this Hunk got down from the truck just before an hour, got dressed up with front bumper, saree guard, etc. and headed straight to BikeAdvice office. I’ve never ridden a bike as new as this Hunk. 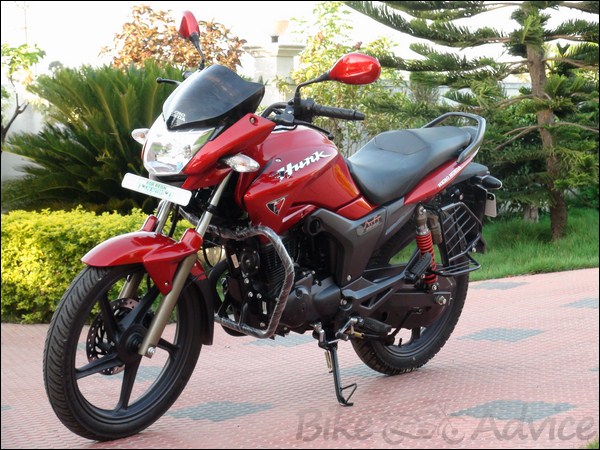 The look of the 2011 Hero Honda Hunk impressed me to a certain extent, but it evidently revealed the fact that it was not very different from her predecessor – the old Hunk. Visually, the headlamp visor has undergone a slight plastic surgery to get a muscle bike touch and I would say that Hero Honda has succeeded in its attempt as well.  This is the most visible of all the minor changes that this bike has been incorporated with. 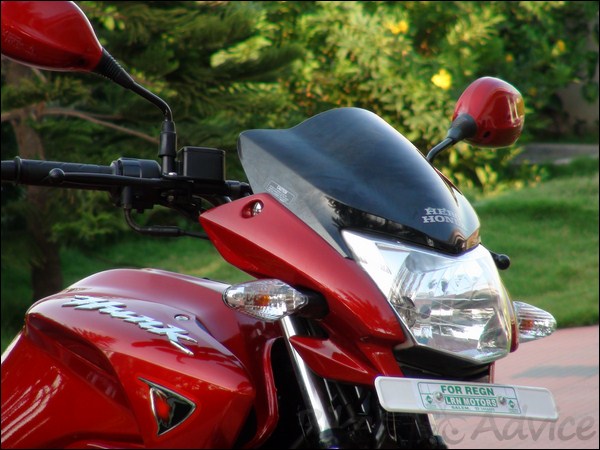 What impressed me in this bike is its instrumental cluster. Hero Honda prefers it being called Ano-Digital Speed Panel, which is a combination of both analog and digital spedometer. There is only a slight pinch of digital effect and the rest of the cluster is dominated by analog devices itself.

Though it’s not completely digitalised as I’ve been telling, it looks really macho in terms of layout. The tachometer dominates the cluster with its bigger dial.  The border of this entire cluster is chrome tipped adding to its gorgeousness. And you know what; the 2011 Hero Honda Hunk has a clock too apart from 2 tripmeters. 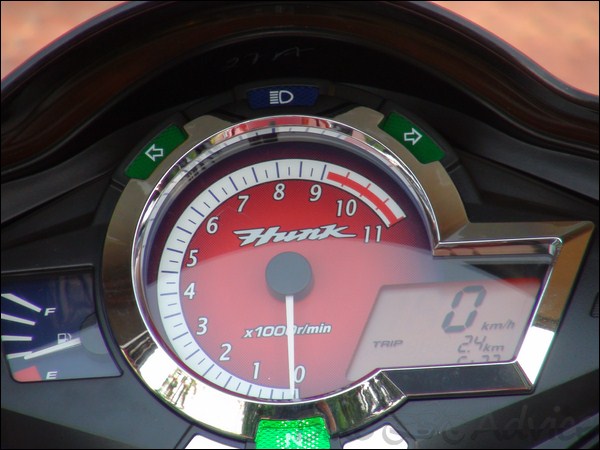 The LED tail light is not so catchy. The reason is that the brightness is very low compared with the other LEDs in the market. 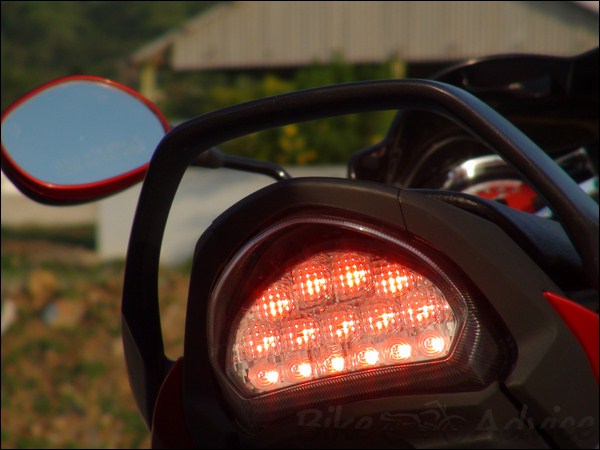 As in the case of 2011 Karizma ZMR, there are pinches of Astra Gold every here and there.  The front shocks and the GRS suspension are Astra Gold touched and looks very neat and decent. 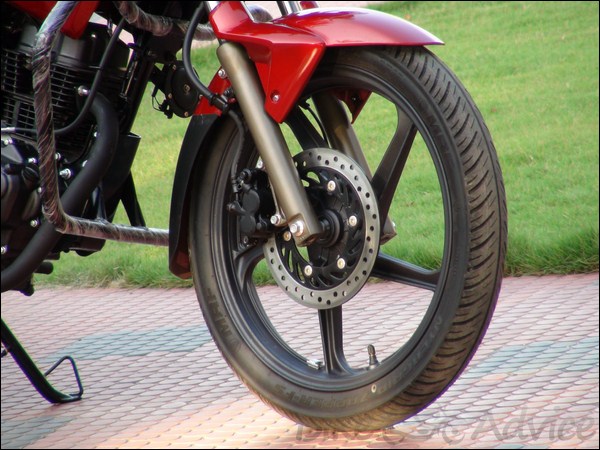 There are too much of colours in every single Hunk. In the red Hunk we rode, most of the body area is red coloured, the grab rail and the area above the tail light in a kind of greyish black matte finished and the muffler cover is glossy black in colour. I would call it a Great Colour Play.  The body coloured mirrors are cool enough to attract attention. The side air intake scoops remind the Yamaha Gladiator. 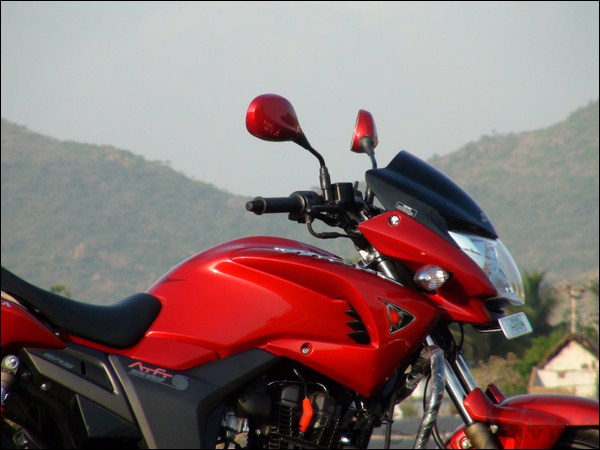 Now let’s get to the riding impression of the Hunk. I started the bike and the first surprise waited right there for me. A mere touch with a slight force is more than enough to ignite this bike. It’s pretty similar to what we refer to as ‘Feather Touch’. Damn impressive.

Right here, the 149.2 cc, Air Cooled, Single cylinder engines comes alive. The engine is capable of producing a maximum power of 10.6 KW @ 8500 rpm and similarly a maximum torque of 12.8 N-m @ 6500 rpm. The initial pick-up of this bike is at par with the other fierce warriors in the market. 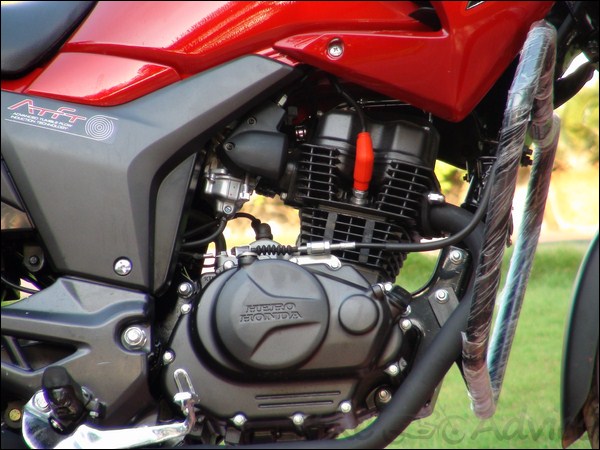 When it comes to the gearbox, the 5 speed gearbox is not as slicker and sharper like the Yamahas. There was this issue in the previous Hunk as well. Though it’s not irritating to use it, Hero Honda engineers could have worked on it a little more. But still, it’s fine. 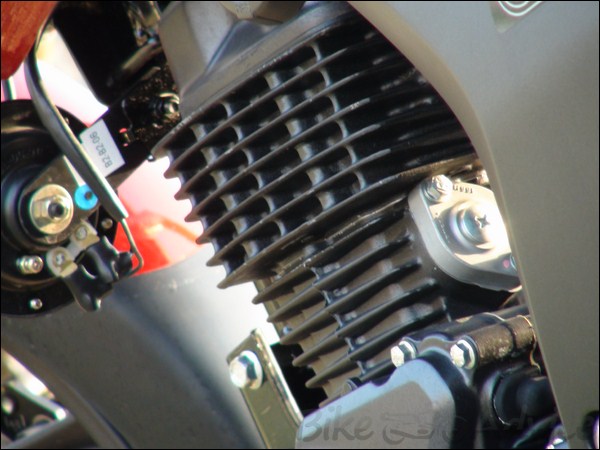 At 146kg, this bike is not heavy to handle and is easy to use in city manoeuvring too. The riding comfort in this bike has nothing specific to talk about. As we have been seeing, the seat of Hunk is pretty different from the other bikes. It’s not exactly split seats but the height between the area for the rider and the pillion rider is really high. 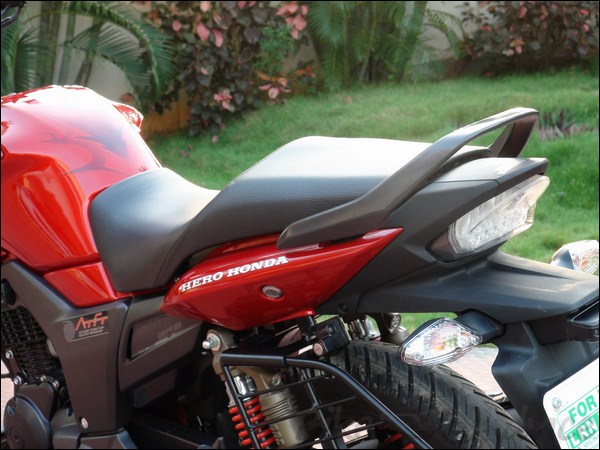 I rode this bike both within the city limit as well as in the highway. The drawback with this seat which I observed was that it’s ideal for short drives within the city. But, when it comes to long drives in the highways, you can’t adjust yourself the way you want, because your seat would end right behind your butt. The small advantage is that it offers backrest for the bottom of your back. 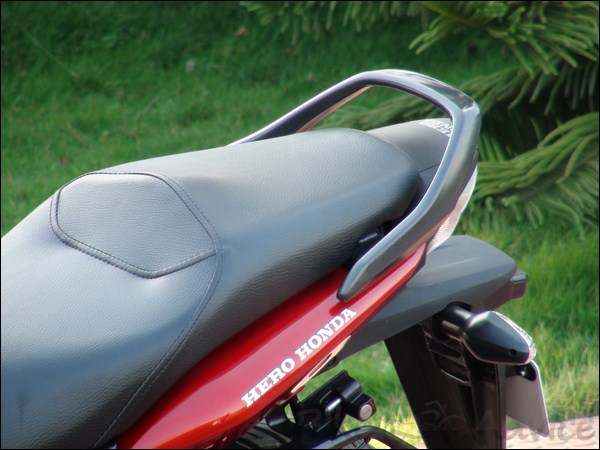 The one which I rode was the single disc variant of Hunk. There is also the option of choosing with discs in both, front as well as in the rear. The front disc is of 240mm which is really small and offers very poor braking experience; an issue worth concern. 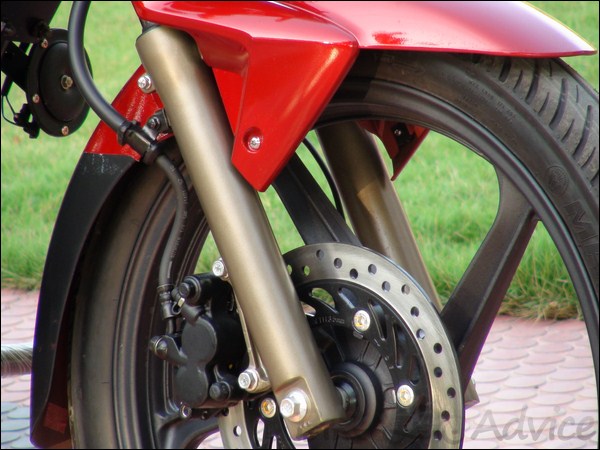 The Nitrox GRS (Gas Reservoir Suspension) offers good suspension in the rear. To mention about its tyres, both are fitted with MRF Zapper tubeless tyres and offers decent road grip. The 5 spoke alloy looks cool and matches perfectly with the looks of this bike. And above all, guess what the Hero Honda Hunk has no kicker to start the bike. Wow! 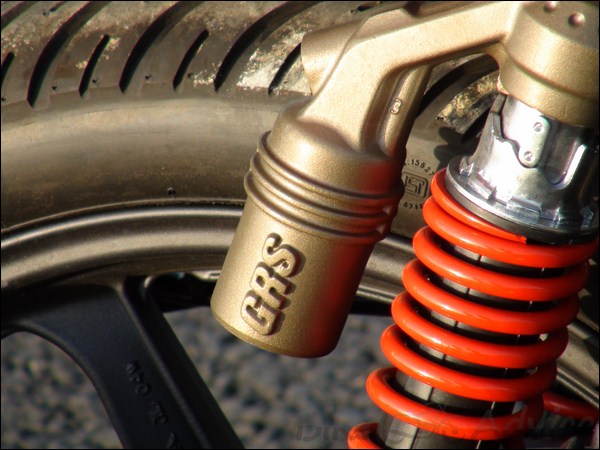 The fuel tank in Hunk can hold 12.4 litres of petrol with a reserve capacity of 2.2 litres which is ideal for a 150cc bike. 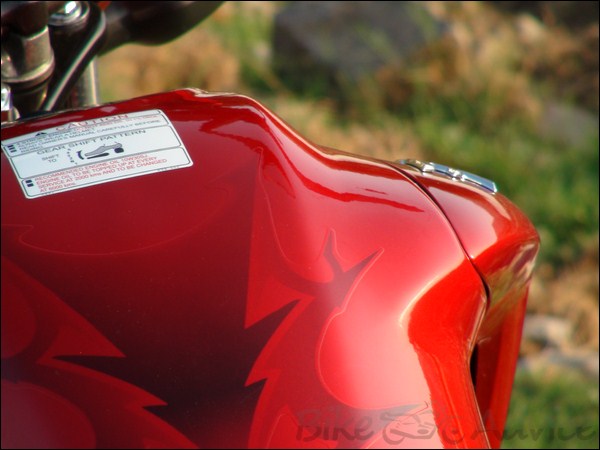 There are however few drawbacks, I observed with this bike. The Hunk doesn’t even have an Engine Kill Switch. Almost all bikes today comes equipped with one. For guys like me who are used to using this switch in traffic signals to turn off the bike, it is pretty hard to get used to it. I don’t know why isn’t this switch present. That area of the handlebar is vacant anyways. 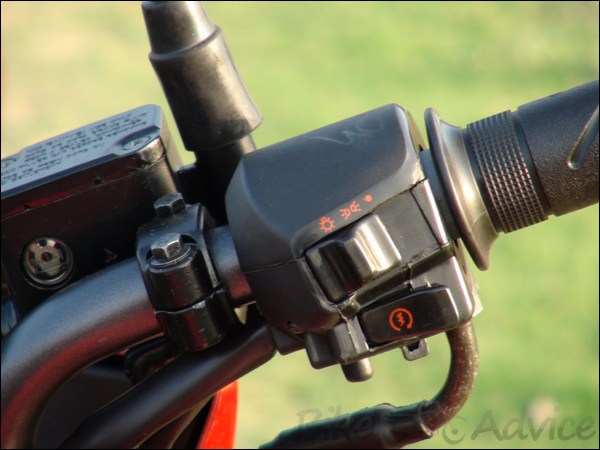 The next is, the way the side stand is placed. It becomes a tedious task to get the side stand down while parking. The front footpegs are retractable and needs to be folded to use the stand; could have been better designed. 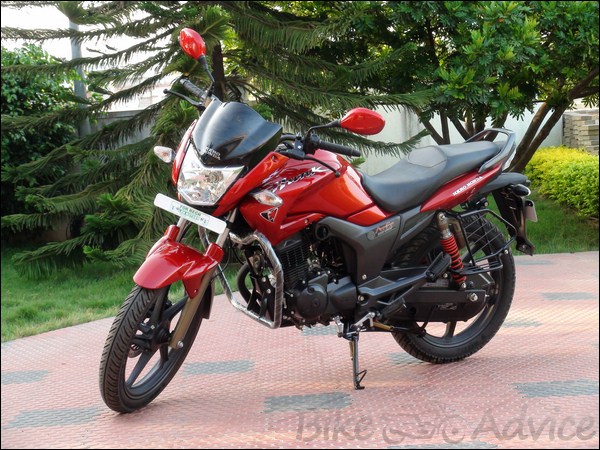 Overall, if you want a powerful and attractive city commuter, this is an awesome bike to go with. But, if you expect a tourister kind of performance, ‘Think Before You Leap’ is all that I gotta tell you! But if you have one already, no regrets 🙂 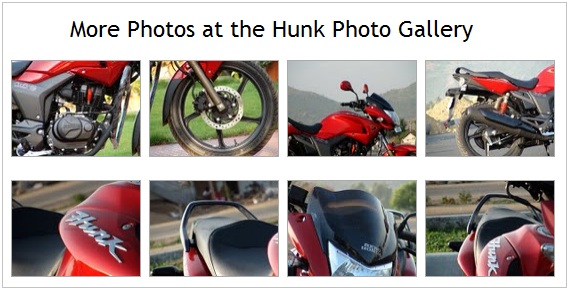