I have my own superhero moments. It starts at the exact time I put on my helmet to be astride my bike and initiate the definitive sound of the engine coming alive. I am happiest when I ride and the world around transforms into a conjured up fantasy, with me as the single protagonist. 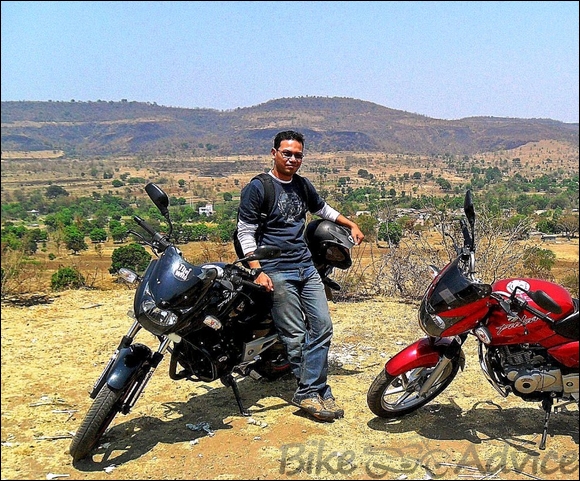 I enjoy the experience more than the thrill of speed and these come with memories and interesting stories, each with an associated landmark and a couple of hundred miles to its credit. My ride – it’s a 2010 Midnight Black Bajaj Pulsar 150 UG 4.5 and I must say I have been a happy owner. There are various aspects which endears me to the Pulsar, for a start I like the reverberating sound of a Pulsar engine.

The different rhythms emanating out of a Pulsar since it was first launched has always been super soothing to my ears all the while. I would still place the distinct sound of the erstwhile Yamaha RX 100 at the top of my list, but its Pulsar all the way thereafter. Buying a bike was always a priority. 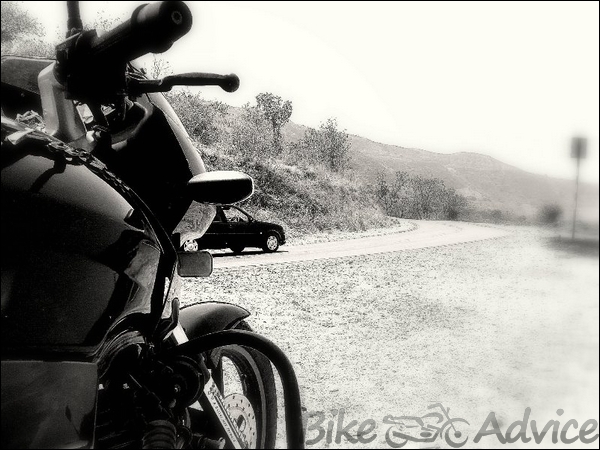 I had made several attempts at deciding whether to go for a second-hand bike or a new one, but I guess better sense prevailed when I finally decided to wait for a perfect opportunity to splurge on a gleaming new Pulsar. Like most of us I have this habit of going through a ton of reviews / comments / opinions before the actual investment.

And so it was a daily regimen of surfing through sites, magazines, forums and of course the Bike advice buying guide which I had downloaded a couple of times. There were the technical jargons, performance statistics, efficiency figures etc, but surprisingly making the final decision was easier than I presumed, although it does include a lot of thoughts hovering at the back of the mind. 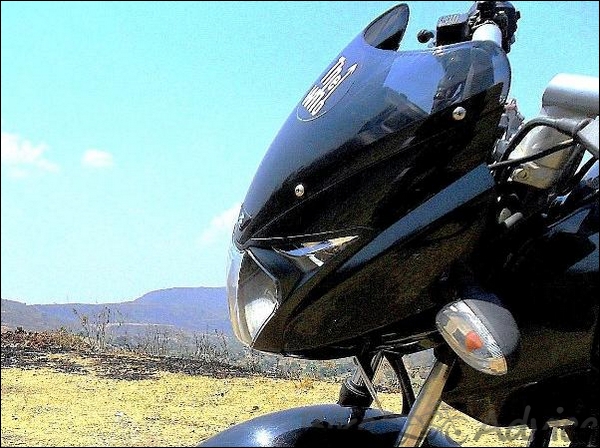 For an average user like me there are the constraints of budget [Just had Rs 68,000 to spend], running and maintenance costs which become a defining factor. The actual delivery date was one of the major reasons that I considered while making the choice for I needed a bike as soon as possible when the finance was at hand and ready.

I rummaged through most of the dealerships of various bikes in that segment, but only the bajaj dealership [very near to my place where I reside currently] assured me of a delivery in less than a week, [most of the others didn’t even have a model in their showroom to showcase]. I just had to furnish all the details and complete the formalities. 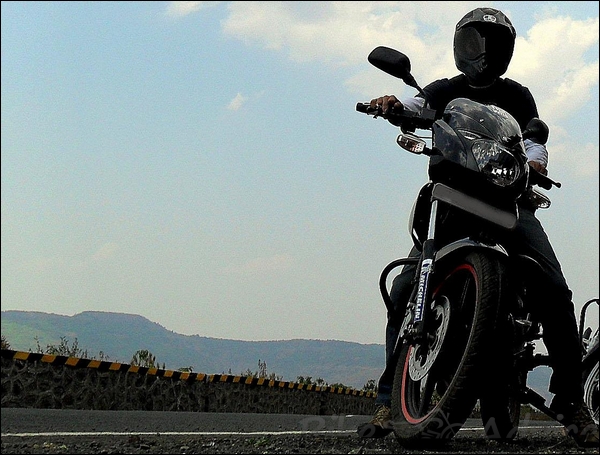 Everything went smoothly and the whole buying experience culminated with me getting the keys to my very own Pulsar in all its glorious black livery. The feeling was truly memorable and well remembered in the chronicles of my life. It’s almost a year now, since I became a proud owner and I have a bagful of experiences to share.

I have had the chance to ride most of the bikes available in the market today [upto 230 cc] and I am led to believe that each one of them possesses a certain amount of perfection in its own right. As the price band goes northwards the refinement goes up too but it’s all about getting the perfect bang for the buck. 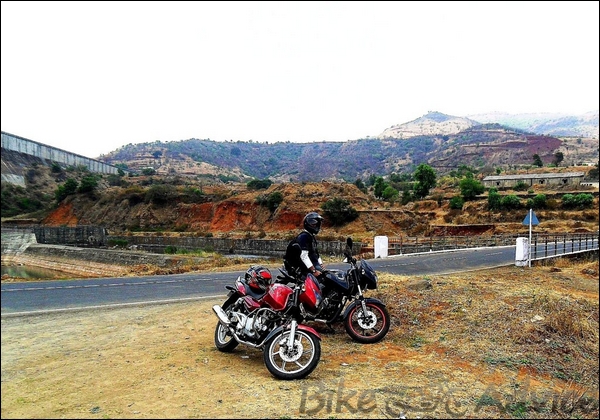 The Pulsar 150 is my definition of a fun, practical and a fuel – efficient contemporary vehicle of choice which has effectively met my objectives of frequent city roundabouts, office transport and those occasional yet much awaited long rides in and around Pune. I would like to opine that the mileage has been excellent and trips to the fuel stations have been less frequent.

I haven’t tried out the tank-full to empty measure for efficiency yet, but I try to never go to reserve. Between the pump visits I constantly get figures of 55 – 60 kms [that’s within city limits] to a litre, inspite of the traffic and zillion gear changes. I guess that works as a cushion to the never-ending price hikes for petrol. Believe me that sinking feeling which comes in if we do not get our moneys’s worth was a constant worry on my radar.

But with the Pulsar I don’t seem to find the time for all that philosophical musings, because I am always busy with the workings around the most striking piece of machinery with me right at this moment. I have zipped through rains, the sun, the traffic and the likes on my Pulsar and the going has been great to say the least. I let the experience garnered while on a ride to equate the performance statistics. 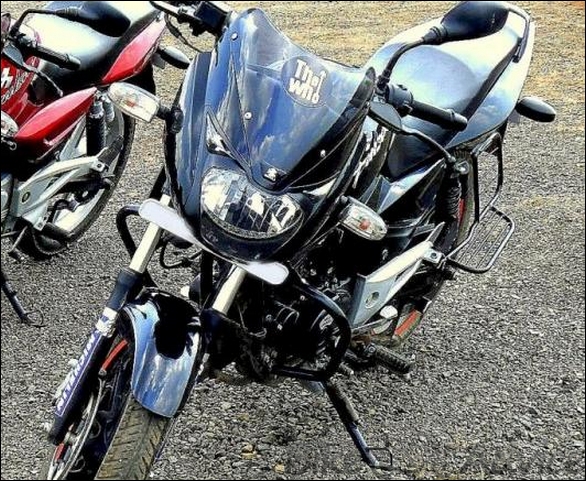 Comparisions are there in plenty on the World Wide Web but finally it’s the relationship between the bike and its rider. I have friends, owners of apaches, hero hondas, Yamahas, Pulsars etc who would hear nothing negative about their bikes. I understand that wisdom and respect the mutual feeling. There’s some associated pleasure in taking out the bike and bringing it home. I feel that vibe everyday.

For the more earthly concerns, yes there has been some niggles. I didn’t get the choice of MRF zappers during delivery and had to settle for Eurogrips which have not been upto the mark as far as grip is concerned and has induced some hyper tension moments with the disc brake upfront. 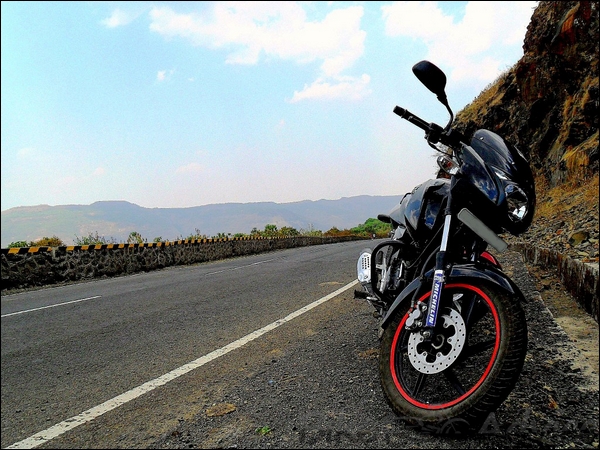 A few minor scratches stand out on an otherwise squeaky clean panels lying there as a testimony and a reminder to be on the lookout for the multitude of dangers associated with riding on our roads. I have been made aware by various Pulsar owners riding on eurogrips on the issues with not having the perfect bite. I am in full agreement. The problem increases manifolds on wet roads and you have to work towards corecting your riding style acording to the conditions.

Riding slow is an advisable option then. I am contemplating making a move to the properly suited zappers very soon. But personally I find the overall geometry involving the wheel-base coupled with the clip-on handlebars greatly modulated for cornering and tight maneuvres, eurogrip or whatever. I have had my share of fun while on my sojourns to the windy ghat sections and the highways.

I mimic the legendary racetrack bends with the foot-peg sparks flying whenever it’s dry and there is an opportunity. To add to the dislike list, the self-cancelling indicators is a nuisance sometimes indulging in its own mood swings to decide when to work and when not to. And there are some wheezing sounds which I am told is due to the front fairing, but haven’t noticed it for quite a while now. 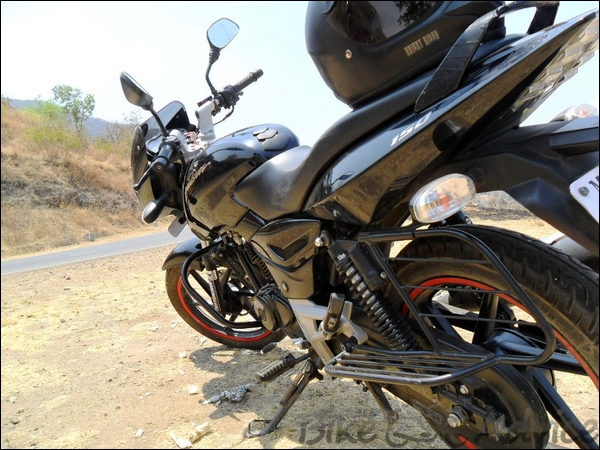 That I can partially attribute to the involving ride experience of my Pulsar. I am just too engrossed at the road upfront and opening up the throttle which is a seamless procedure effectively using up the bhps on tap. I am always on the lookout for opportunities to embark on long rides; luckily I have had the chances inspite of the hectic office schedules [read weekend shifts]. I would like to do a trip to Goa soon for which plans are afoot.

For that I have tried to build up and measure the requirements by going out on practice rides. Lavasa near Pune has been a favourite hunting ground. It has the twists and turns coupled with roads in good conditions and scenic ambiences. The performance of the bike is of great relevance when we venture out on such outings.

While I have noticed the torque being on the lower side for the UG 4.5 version of the Pulsar 150 and needs the correct gear changes, the top-end comes into play at the right time which is ideally suited to my style of riding. I generally go for a gradual rise in acceleration instead of sudden thrusts. My bike has performed above expectations for all my requirements.

I feel there has to be a certain amount of indulgence showered on the bike too which goes a long way in keeping it in a sparkling condition. Normally the “taking care” graph is at its peak during the initial years when the bike is still new and then it dips as the times go by. I try and do a check everyday for the basics at least, viz – any loose underpinnings, oil level etc and of course the servicing cycles.

The monsoon though makes the cleanliness part a tricky errand. But again, riding in the rains is a different experience altogether. I ventured out on one such rain soaked day for a long ride to Lonavla. The presence of fog made for a breathtaking sequence just that we had to be extra careful at every bend and the incoming traffic. I had done this route previously on a CT 100, a CBZ, my Maruti Esteem and others but the difference was palpable. 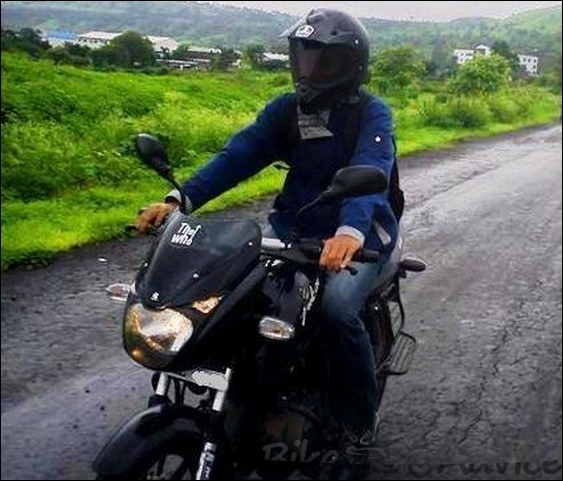 On reaching there, did that familiar Amby valley run, it was very crowded being a weekend. And the points, well you could only imagine the boundary, for it was all enveloped in the thick fog. I had some piping hot tea and pakodas from one of the stalls and with nothing much to do readied up for the return. The cleaning I had to do on returning was a mammoth task but was worth it.

Still for the next one in line I would like to wait for a clearer sky with the sun shining, for now I seem to prefer the wind felt within the innards of the helmet during a mile crunch [and maybe as an escape from the cleaning errands too]. That said, for me whenever a ride’s completed and I return with the sun-rays dissolving at my back there is just one scene which stands out in the fading light. It’s always the silhouette of my Pulsar with the distinctive glow of the pilot lamps turned on.