Tirthankar has submitted this review in our Ownership Review Contest No 13, ensuring himself an assured prize. The contest also offers a chance to win Riding Jacket, Helmet and more.. You can submit your review to us as well before 23rd Feb. Here are all the details.

Hello everyone! This is Tirthankar Modak, from Krishnanagar, West Bengal. I am currently a second year student and a die hard bike enthusiast. This is my first article here. Although BikeAdvice is a very familiar name, I was just a reader so long. I would like to thank everyone here who helped me in selecting the best bike for me. 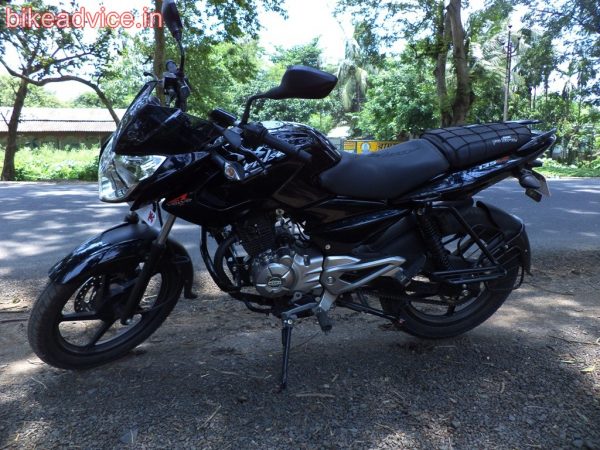 Today, I would like to share with you my ownership experience of my Bajaj Pulsar 135LS (midnight black). I have currently done around 4500km on the ODO and would tell you everything in details about what makes it the most awarded Indian bike so far and at the same time some negatives which I found. My previous bike was a Hero Glamour which I had to sell within 6 months for low mileage which came as a shock to me and my dad.

How it all began:

Guys I already told you I am a die hard bike enthusiast and bikes were part of my life ever since I was in class 4. I could not ride them then but we had a Splendor and dad would take me on regular trips in the hilly roads of Pachmarhi, M.P. Let me tell you that dad was very sceptical about Bajaj products and I had quite an argument at home before going for it. 135LS was on my mind even before Glamour but we had this blind faith in Honda (no offence, Honda is still the best in terms of refinement). I used to download and read reviews 24×7 and show it to dad. Finally he gave in. 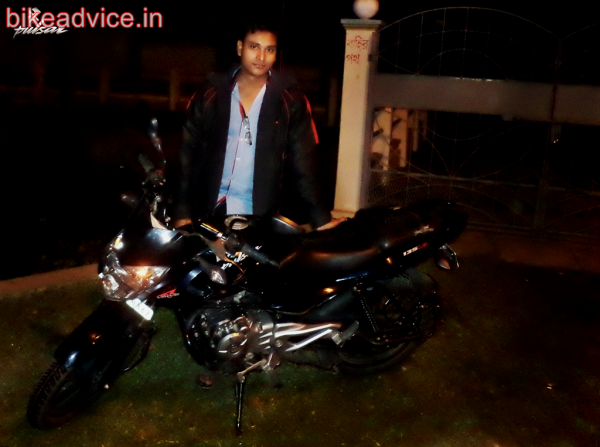 The reviews said that this 134.6cc bike could go upto 10500rpm with a speedo indicated top speed of 126kmph while giving 60kmpl average. Plus I personally love its tail lamp cluster and the way it looks at night. And I love speed too. Being a student, mileage was a factor to decide and this bike seemed perfect. I knew that these were the next generation bikes from Bajaj and nothing is perfect. So I just went for it.

Our budget was around 70k+ and mileage being a factor and petrol prices at around 84rs when I bought it, the options were few. Somebody had adviced TVS Phoenix too but its looks didn’t attract me. So I was left with Hero Ignitor, Honda Stunner, Honda Shine,Yamaha SS125, Bajaj Discover 125ST and Pulsar 135LS.

Ignitor checked out because I could not bet money on a Hero product again. Stunner got rejected because I like speeding and my friends told that it does not feel good past 60kmph plus they were getting around 45-50kmpl on the super adulterated petrol that we get here. A 150cc should give that average. Shine was not for me. It does not go well with youth. SS125 is a great bike guys. But looks and mileage made sure that it was out, besides 135LS outperforms it anyday. 125ST was checked out because 135LS overshadowed it completely and I hate Discovers.

The first thing that I noticed was you could feel the engine on the handle bars. It felt more so because I was into a Honda engine so long. But it felt pleasant. Yes guys, you will love the feel. It feels sporty. And it is very eager to pull at any rpm. The handling is very light and I could flick it very easily!

The seats disappoint a lot. You will feel the pain if you ride it for more than an hour straight. Let me break this into sections for ease of reading

The engine on this pulsar is very different from the other bikes in its class. It’s a 4 valve 134.6cc motor which makes 13.5PS at 9000rpm and 11.4Nm at 7500rpm. And it revs to 10500rpm without any stress but with vibrations. Apart from the costly imports, only Yamaha R15 redlines at 10500. 5th gear pulled from 23kmph. 3rd gear pulled from 7kmph with the engine warmed up. I am 69.5kg and this impressed me. It feels a bit rough in very hot weather conditions but is very smooth normally. 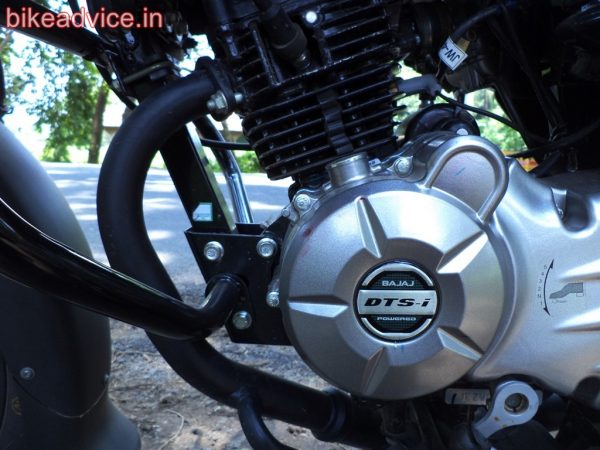 Clutch is lighter than typical Bajajs and though not a Honda, it is sufficiently good to grip and won’t trouble. Gearbox is also smooth but not a Honda again but you again can’t complain. It slots well and apart from two or three times, I found the neutral easily. Just shift at right rpm and it will be smooth. If you have trouble with neutral, then switch the engine off and it will come to neutral at one go. Not a problem for me.

When it was new, it gave me 52kmpl. After two services, it is giving me 60kmpl on an average. It never falls below 55. I have done around 4500km and so far its good. It is winter now and the auto choke on this bike chokes it once in the morning and again in the evening.

I have tested this personally and this is what I did.

It takes time to reach 127 but luckily I had road enough. I normally ride at around 90-100 beyond which the roads do not always allow. I love the exhaust note above 6000rpm and specially so when you are wearing a full face helmet. On a good day, you won’t feel disturbing vibes below 9500rpm.

Normal vibes start from 5000 onwards and won’t matter. Every air cooled engine vibrates. I mentioned ‘good day’ which might make you think…!

Let me explain, pulsar does not feel the same all the time. A hot day complimented with bad petrol will give you a bad ride quality. But its amazing how you rev it hard and everything feels normal again. I am talking about this feeling you get when you ride a bike. 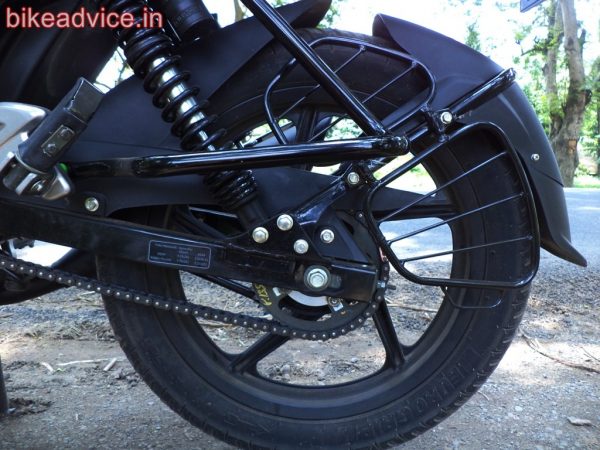 Not for bad roads:

135LS is best suited for good city roads. Take it on a rough patch and be prepared for surprises. Hard seats plus hard suspension will trouble. And thank you Bajaj for removing the MRFs which featured on the 2010 model. It now comes with Eurogrips mostly and Eurogrips are renowned for bad grip.

I felt it badly in rain but on dry roads,they have not troubled me so far. Because the bike is only 122kg dry and the front is so light, the bad roads come upto your hands more. Its just not a bike for rough roads. I hate the cushioning on it. I love its handling. I have tilted the bike till the foot pegs nearly touched the road and found it very willing. The bike is very well balanced because my shoes rarely touch the ground even when the traffic slows me down to 1-2 kmph. 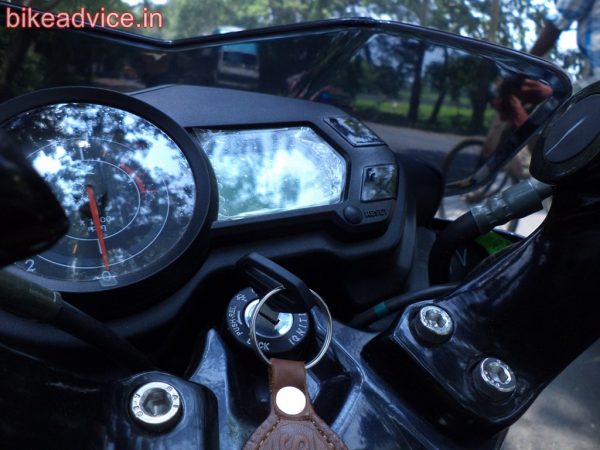 Can’t complain again. But the alloys feel rough. The oil from open chain makes it worse. But you need to clean it and it will be ok. The number plate lamp fused thrice in two months before I replaced it with another brand and since then its ok. Paint quality is good. The covering tapes on wires from headlamp were coming out. I took care of that with some extra tape.

Paint has chipped on the edges of engine grooves at one place. This is bad. Bajaj had to show up somewhere. The leg guards, I doubt won’t save your legs. One thing that I feel not so good is the pricing of this bike now. I had bought it for 71k+ on road and now it is nearly 75K. There is not much material on this 122kg bike. Bajaj is charging so much just because of the segment may be. Or may be because its popular and there is best out of both worlds here in this bike. 13.5PS comes to around 13.3bhp which is not much behind typical 150cc and then the good mileage of 125cc. What else can you ask for?

‘Endurance’ disk brakes (240mm) at the front give a very good feel. The rear brakes do not grip hard but they are sufficient. These brakes have saved my life many times. The bike stops very well and you need not worry.

The bike is very skinny and won’t suit very healthy people. The front looks of the bike from a distance are not that good. The headlamp is good but feels something missing, may be the width. Tyre hugger has been changed to split type but that splashes mud over the second part, that is the part connected from the middle when it rains. The full length one was so badly criticized for bad looks but it was more practical. The one on the R15 does not have this gap in between for the mud to come out. 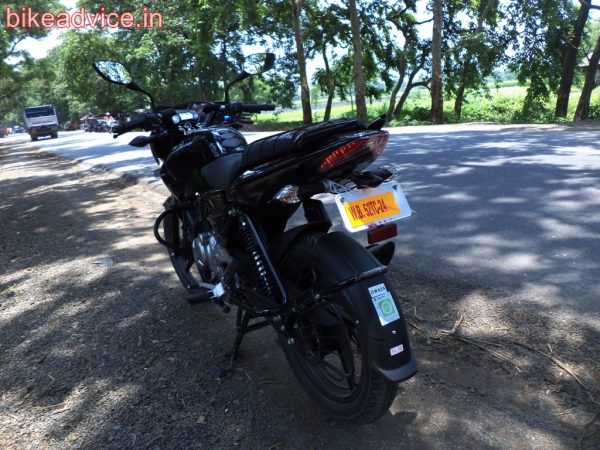 What I hate about Bajaj servicing:

I do not know if it is the case everywhere but the guys here are very eager to replace parts. They replaced chain link lock at 2000km just because it was my second servicing and it was written on the leaflet. I don’t understand why they change parts even when then bike has not run the specified kilometers!

They may change shocker oil and seal during 3rd service because it is again written on the leaflet. They won’t care if the bike has covered the distance. I believe that they should not mess with the bike if it is going good. Next is the joke called Bajaj DTSi 10000 oil which comes at 370rs for a litre and is crap. It wears out before 3000km. 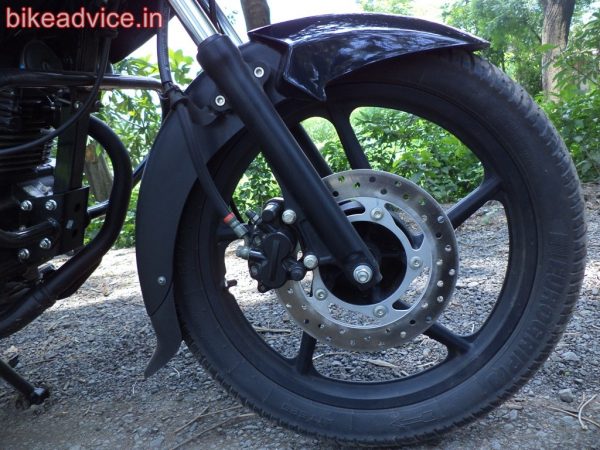 Who should buy Pulsar 135LS?

You love power and need speed too and with good mileage? Won’t care much about refinement and comfort? Won’t tour on your bike? Go for it then. But there are days when you miss refinement and a well padded Unicorn like seat. It is very silent and smooth below 4000rpm which even my dad ( who loves Honda) pointed out.

Go above it and be surprised for an insane pull. People are not so used to seeing such a small bike pull like that here, so they often stare in surprise, sometimes in anger. But the bike feels in control. I have not mentioned much technical detail because it would unnecessarily lengthen my review.