To Team Yamaha: I had been thinking of this for a long time, to be precise for as much a year and a half about this. The reason for Pulsar’s success in India is the way Bajaj promotes its ads, apart from its performance as well. The PulsarMania music is still the ringtone in the mobiles of many hardcore Pulsar fans including many of my friends. Bajaj has made very effective use of the music note. 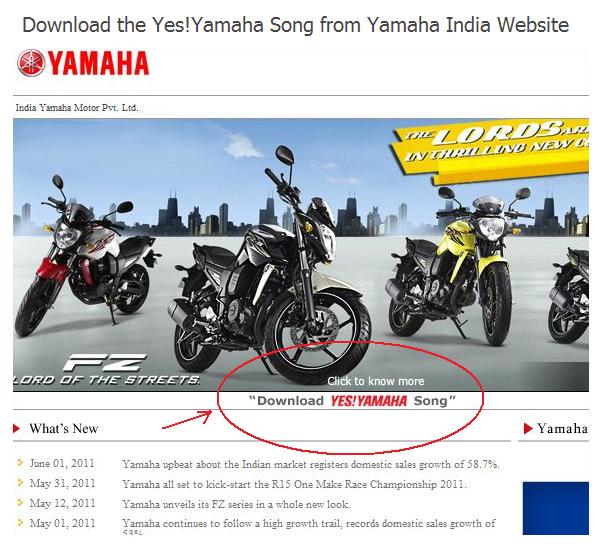 Similarly, Yamaha India Motors has a soundtrack popularly referred to as the ‘Yes!Yamaha’ song. It was unfortunate for me to hear that many Yamaha users were even unaware of it and had never heard it before. It is actually a full 3 minute song (2 min 56 sec accurately) comprising of both English and Hindi lyrics. There are words like ‘It has created Sensation, Yamaha means Perfection’, high enough to make any Yamaha fan feel great and proud within.

I personally suggest the Yamaha India Motors to come up with a new, full action packed ad featuring stunt scenes and this song being played at the background. It gives me a personal feel that Yamaha is actually wasting this good song which is worth being advertised, if utilized in the right manner. It can use this ad to promote the YZF R15, FZ, Fazer and other such models.

Anyways at this juncture, we are pretty sure that the new R15 is set to hit the Indian markets in a short while, though no exact dates are mentioned. Thanks to the spy pics clicked in various places. I wish Yamaha makes use of this soundtrack with the launch of this best bike from Yamaha, the YZF-R15 which has taken the Indian biking community to the next level.

This song can be downloaded directly from the Yamaha India website.