Hi this is Dhruvaraj here with the review of my Yamaha R15 which I bought on 14th of August. The bike owned by me previously was the Bajaj Pulsar 180cc UG3 model. Hmmm whenever I look back on the dilemma I went through while choosing my bike, I smile thinking about all the decisions which were made then. I had thought of buying the Pulsar 220F as my next bike, but I decided not to buy it as there were rumours that the Honda CBR250R was going to be released in India. 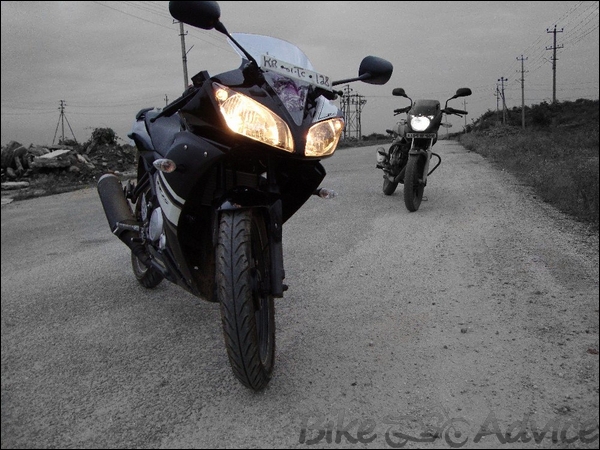 I decided to buy my bike in November 2010. Around that time it was announced that the CBR bookings were going to start during the first week of January. In March, I booked the CBR after an amazing test-ride. But the problem which all bikers face whenever companies release new bikes is the availability of the spares.

So I refrained from buying the CBR also. I had driven my friend’s Honda CB Unicorn Dazzler, and fell in love with the smoothness of the bike.

I wanted to choose the bike according to two criteria

So my options were bikes made by Honda, Yamaha and Suzuki. Dazzler from Honda and R15 from Yamaha were chosen as the bikes I should go for as they had fit my criteria aptly. And finally being the race-buff I am, I chose the Yamaha over Honda; and thus the decision for buying the R15 was made.

The regrets I have are… 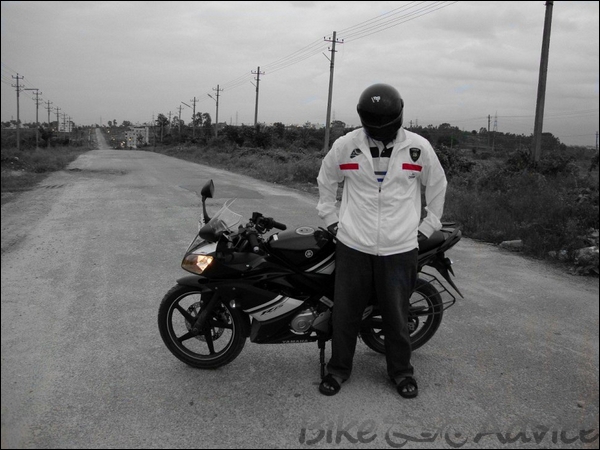 I am not able to utilize the vehicle to its maximum potential, since I am huge in size compared to the bike so I am already on my way to reduce weight. My previous bike the Bajaj Pulsar 180cc UG3 model {I have no complaints against my Pulsar as it has served me faithfully} was the perfect beginner’s bike. It was just raw semi-refined power put into a bike which was then sold for nominal price.

The transition from Pulsar to R15 was a bit difficult at first. The differences were the full front faring, the split handle bars, the rear disc brake, reserve meter, and the 6 speed gearbox. Compared to having no fairing, the fairing present in R15 was like a huge leap for me. 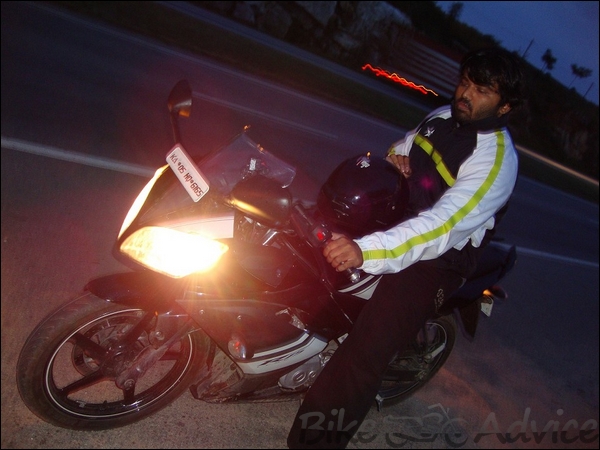 My driving skill had to be improved to a great extent after buying this bike; following lane rules became mandatory for me so that I didn’t mess up my bike, as compared to squeezing the Pulsar in every nook and cranny amidst heavy Bangalore traffic.

The 6 speed gearbox was difficult to get used to since the Pulsar by default comes with a 5 speed gearbox; I used to forget about the existence of 6th gear or would forget to come down a gear extra while gearing down. The positioning of the handle bar provides comfortable maneuverability even in traffic but the only difference was that I had to lean a bit more.

This is just my opinion but every bike out there should be provided with a rear disc brake, the cost of the rear brake kit should be reduced and should be made a standard in each and every bike. Rear disc brake makes all the difference while braking in bikes, when compared against the standard drum brakes, the braking feels so much better than pulsar. 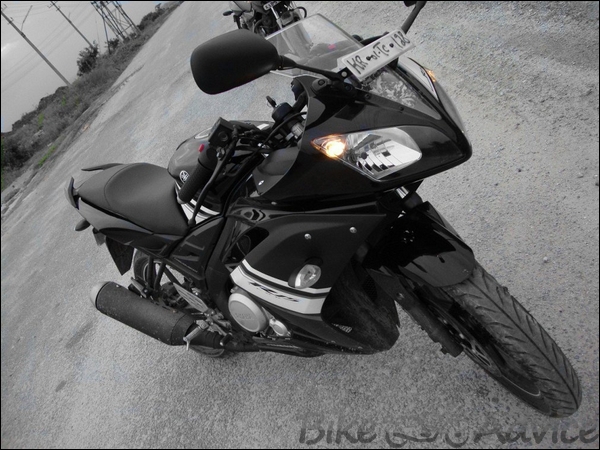 There is a reserve meter provided in the bike which shows the distance travelled after the fuel goes into reserve mode which is very convenient. I fill super unleaded petrol from Shell stations and get a mileage of 42-44 kmpl. The price was a bit heavy on my pocket but the bike is definitely worth the buy. I have gone a good 2000+ kms on the bike and the handling you feel in this bike is amazing.

I reached a good 132 kmph on my bike on Néce road; couldn’t try to go higher due to a bit of traffic being present there. The corners present in and around Bangalore are too tempting to be tried out. But the only problem there would be the pot-holes or speed-breakers present after you finish up your cornering waiting to catch you off-guard and throw you out of balance.

The bike, at the end of the day, does really make you say “Yes Yamaha” as their slogan goes. So, drive safely so that you can live longer to drive many other amazing bikes. Touring in my bike has yet to start as I am waiting for my third service to get over. I am also waiting for one of my friends who got his Royal Enfield 500cc black to finish up his bike’s services. 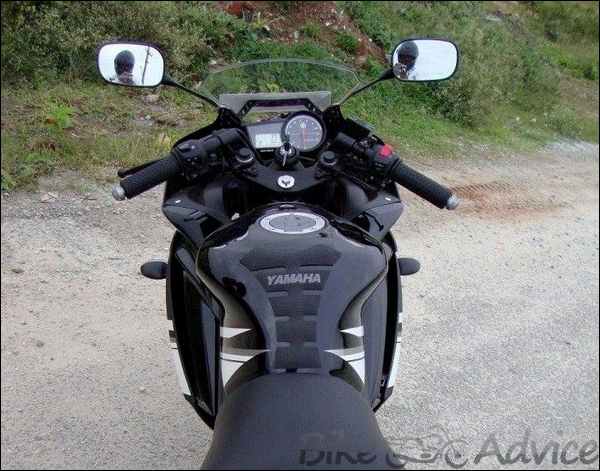 If bikeadvice.in allows then I will definitely be posting the pictures taken when we start our touring. Concluding this piece of my mind would be a question. This bike was meant for my younger bro, and I have taken a liking for it. Since he won’t be having his adventures on this bike, It’s only fair that I get him another bike. So the question is Should I get him the KTM duke or the Yamaha R15 v2.0? Enjoy ur rides.