It was only during my 10th standard in the pearl city I developed a interest towards bikes. One such model which really impressed me much was the Hero honda Karizma, it used to be parked in a mechanic shed near my home. It was a black beauty which attracted nearly everyone’s eyes who pass through the busy V.V.D road.

After school I used to walk near the shed to and fro just to gaze upon the vehicle. The 1st time I saw that vehicle I decided to buy just that after my board exams. And after my exams where over I had to move to Chennai to pursue my higher studies and that too I had to stay in a hostel so that dream was halted, but after my school started I saw a vehicle just like a sports bike in the roads. 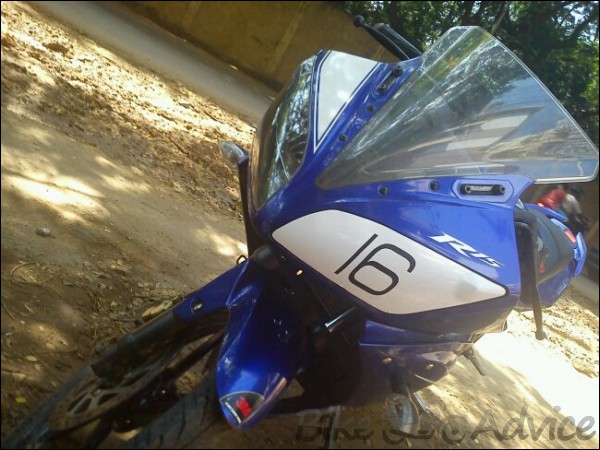 And that machine was none other than the Yamaha YZF R 15. The Machine looked just like a race bike and it really erased my memories of Karizma for ever. I always wanted to have a ride in that bike .The bikes front view really attracted me much as it really uplifted the personality of the driver. Even in the dark the powerful LED lamps really made people turn their heads.

The first person in my area to buy the machine was my elder friend. He bought a Ferrari red coated machine. I used to stand with him and my friends in the tea shop after my school. He is a rash driver that he made 3 accidents before his 3rd service. Me and most of my Chennai friends were die hard racers so they began to buy the vehicle one by one. And in a short time nearly 60% of them had the vehicle.

Everyone used to practice in the tracks located in the outskirts of the city and we used to do different kinds of stunts. We also used to have weekly road trips from Chennai to Pondicherry in our bikes. One of my friend is a super bike rider and he is currently representing India in the 600 cc championships which is being held in Malaysia and Singapore and even he had a black coated R-15 to use in the Indian roads.

We also used to go to the beach early morning to practise. The bike has really scintillating features like linked type mono cross suspension, liquid cooling delta frame and a 4 valve combustion chamber which captures the hearts of the youth. It was during my 12th that I first drove the machine, I could never forget that day as it was really a dream come true for me.

Now after finishing 12th I am again in Chennai for my college and I am driving my close friends blue coated R 15 nearly everyday and it is really a comfortable Experience. My top speed with the machine was 130 km/hr. My parents have agreed to buy the machine after my 1st year in college and I am waiting just for that.

It has really created a revolution among the indian riders and I bet what ever model comes in the future this one will always be a tough contendor. Even a hayabusa is worth a wait, Just kidding!

Thanks for this wonderful opportunity 🙂