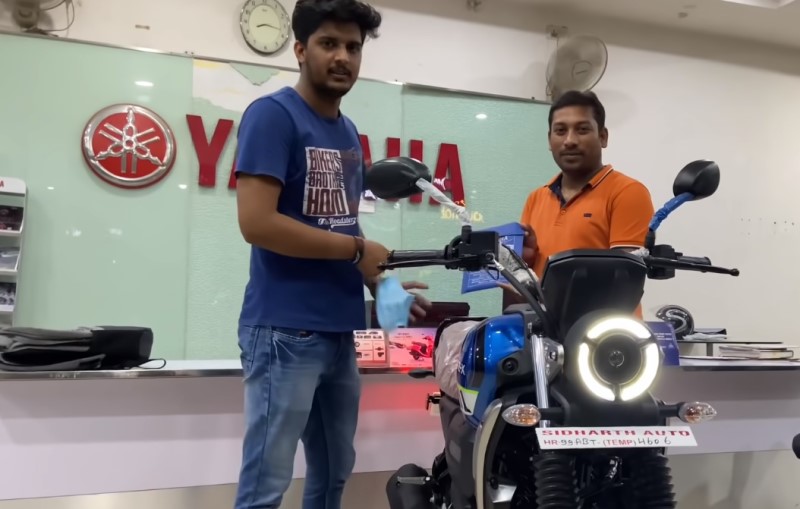 Yamaha FZX deliveries have commenced in cities which have received the motorcycle. Here is one of the first owner from Gurgaon…

Although the XSR155 hasn’t made it to our market, its sibling under the FZ moniker has been recently launched in India. And few days after the launch, the model has started reaching the showrooms. And in fact, deliveries of the motorcycle have also commenced.

A Vlogger MRD Vlogs have posted a video of taking delivery of his brand new FZX. It is the funkier blue color that he has chosen. The blue color has a contrast red colored seat and comes with an additional ’01’ sticker on the tank. The other two colors – orange and black, come devoid of both these features. Also, blue is the only glossy shade in the palette; the other two are matte finished.

The Vlogger shares live looks of the motorcycle. While filling petrol, we also get to see that the tank cap is a disjoint unit – call it retro or call it inconvenient!

In another video done by the same Vlogger, he has tested the motorcycle’s real time fuel efficiency by riding it partially in city and the remaining part on the highway. On a total ride of around 50 km, the brand new FZX returned about 42 kpl.

Though the motorcycle shares its engine with the FZ range, the exhaust note has been made slightly bassy, as per Yamaha. FZX borrows its inspiration from the international roadster model XSR155.

The FZX uses LED lighting on the headlamp, DRL, and the tail-lamp as well. The DRL lights are adjustable. In the daytime, its intensity can be lowered and during the night you can increase it. We also get a good view of these lights during the night in the video.

The FZX model we see in the above video appears to have Bluetooth support. If true, the riders can use the Yamaha Y-Connect app to connect his bike and smartphone. Any missed calls, emails, messages will show up on the instrument console of the motorcycle.

Also, FZX supports USB charging and the socket is near the key section.