Hi! I am Durvankur Patil from Mumbai and I would like to share my story, when my dream turned into reality. For me, it was not much of an inspired move, but came more out of need. Six years ago when I turned 18, owning a bike topped my desire’s list. My father was a little reluctant, or rather against, giving me a bike, considering the impeccably rash and negligent, truck, bus, and rickshaw drivers. 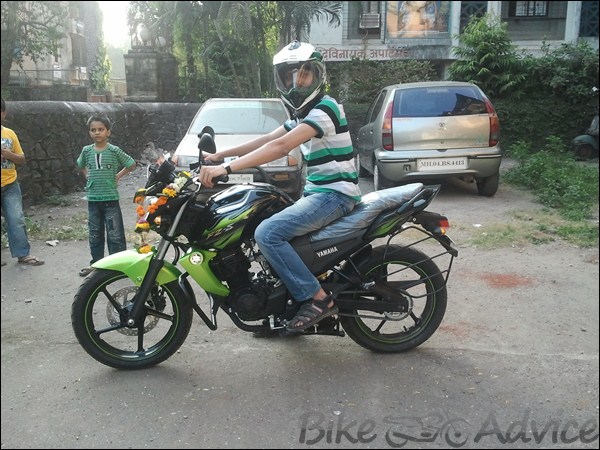 So years passed by and life moved on. From being a college student, I became a working professional, but the desire to own a bike never faded. As travelling to work became a daily nightmare, I knew that it was now or never to buy a bike for myself. Life went into savings mode for almost a year and a half and finally, on the morning of 20th November 2011, I booked for myself, a Black Cyber Green Yamaha FZ-S.

It was one step climbed on the stairs of life. As I was going to celebrate my 24th birthday on 30th November, it was the apt day to bring my dream home. Office that day was just a formality. Heading straight to the showroom in the evening, my mind was racing to all possible situations. I was imagining all sorts of emotions which might just come out after seeing MY bike for the first time.

After completing all the formalities and a surprise birthday party from Yamaha, they finally took the covers off my dream, and after years of wait, I was facing reality. There she was, standing between two of her other sisters, gleaming under the showroom’s light, waiting to be unleashed.

It was a wait for years, so it had to be the best. I needed a bike, which satisfy me in every aspect. From Bajaj, to TVS, to Honda, and finally to Yamaha, the run to every showroom was exciting, but all the more considerate. After scanning through a lot of forums, online reviews, owner’s reviews and a lot of discussions, eliminations and thoughts, it had to be the FZ-S.

The sheer strength and the beauty of the bike captivated me at the first look. I was advised against buying a FZ-S by most of my friends stating that it lacks the appeal for a bike in the 150cc segment, especially on the fuel consumption. But there is no stopping when you are in love, and this was love at first sight.

It was evening, around 6:30 PM, when it was time for me to sit on the saddle of my bike for the first time. After Sagar, my sales person, handed over the keys, it was Me, Myself and My Bike. I fired the engine for the first time and asked for divine intervention and boy oh boy, I felt blessed. The bike came to life and the console glowed in the dark. 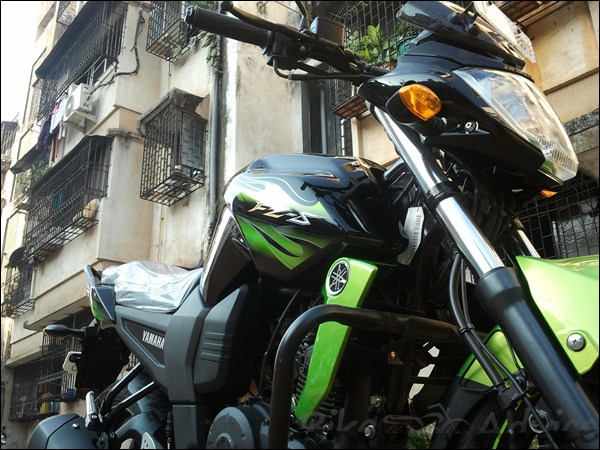 The gatekeeper opened the gate for me and I was welcomed with some peak hour traffic. As the new version of the FZ-S was still new, my bike was grabbing eyeballs and became the centre of attraction at the signals. After my first fuel stop, it was a straight run home, where mom was waiting for her daughter-in-law.

The Run In Period

You could be a good rider, know all about bikes, but when it comes down to riding your own, ‘‘Being careful” becomes the mantra. The run-in had to be perfect, without any glitch or temptations on open road. Kept the revs well below 6k in the initial month of riding and the speed to a considerable 40, it was no use calculating the average then.

After the first servicing, I started opening the throttle a bit. It started feeling better, as I came to know what a beast I was riding. For some reason, I couldn’t take my bike to work for few days, so it used to be night riding after I came home every day. Life never felt better after coming home during those days. I didn’t feel the stress at work as I knew the best part of my day was still waiting for me at home.

Finally, after I got my entry pass for parking in my office premises, I started riding to work every day. It was that day I patted my back, when I realized the worth of my investment. My travelling times reduced by more than half and those tiring journeys back home became a thing of the past. I travel 32 kms daily to office and back, and things look much better now on the travelling front. 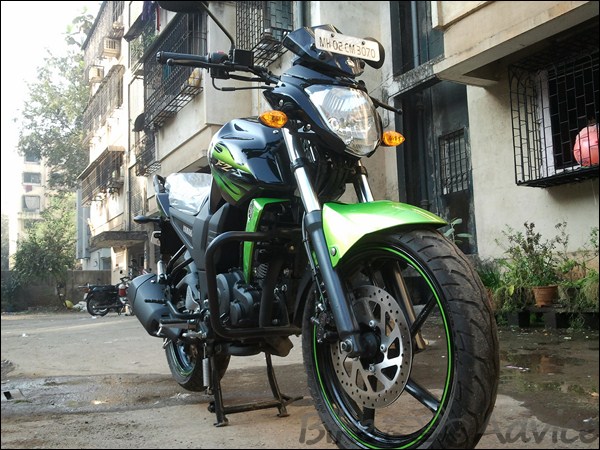 The low-end torque of FZ-S helps immensely during peak hour traffic in Mumbai. The pickup is just mind numbing, especially if you are at the start of the signal. Yamaha surely breeds racing pedigree in their bikes for starting line pickup. The gear shifts are effortless in heavy traffic and help move faster.

I hadn’t put many kilometers on the odometer when I sent my bike for first servicing. It became more of a formality than need. Nevertheless, the engineers at Yamaha showroom did a good job with bike. The engine felt smoother after an oil change and cleaning of the oil filter. I could feel the difference in the performance, the moment I took the bike out from the service centre. I was experiencing some problem with the rear brakes, which the service centre engineers took care of diligently.

“You will always fall short of being careful with your bike, because the roads are filled with idiots.” I was on my way back home from office, when a guy (read: jerk) just came in front of my bike, from in between two stationary buses. I lost the control on my bike as I had to avoid banging into the guy. Luckily, I was riding slowly, thanks to an approaching red signal ahead. Apart from a swollen left foot, I had a bent leg-guard and front visor. 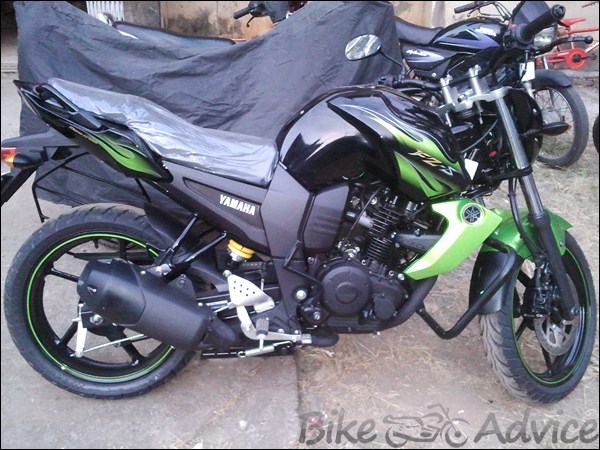 I prefer cleaning my bike by myself. Sundays are reserved for bike maintenance, when I clean and wash my bike thoroughly. I dust the bike every day before I put it under covers for the night. I am still not sure which solution to use to clean my bike as I don’t want the color to fade off due to excessive chemicals. 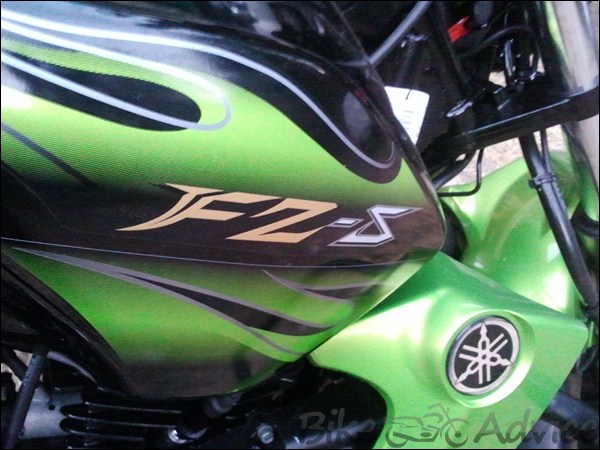 It’s been a running issue on all the forums when it comes to the average FZ-S returns. As mentioned earlier, I was advised against buying a FZ-S for poor mileage. Online forums gave a figure of 40kmpl, whereas owners who rip the bike gave 35 and Yamaha had promised around 45 kmpl. Today, after 3 months of riding, here are the last 3 figures that I got from my bike.

My average riding speed (at all times) is around 55 km/hr and I maintain the revs up to 6K. Apart from that, I have maintained the same fuel station, which is a common practice and also I refuel during night, as the ground temperatures are much cooler at that time to get the optimum amount of fuel in.

My second servicing was an awaited one. There were a few repairs that I needed from my accident earlier. The service centre handled those minor changes at no extra cost. This time, apart from the regular oil change and cleaning the oil filter, I got my chain lubed. It had turned dry and had caught a lot of dust, causing friction while riding and in the process, hampering the ride quality. The run after the servicing has been just exceptional. I have started opening the throttle more frequently now on open roads, but making sure that I am not ripping the engine at the same time. 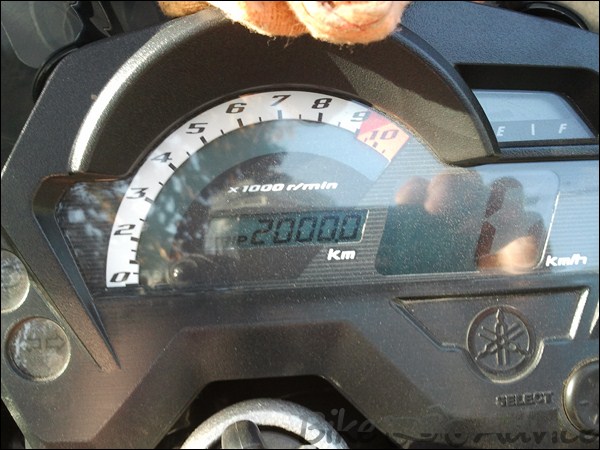 I recently clocked 2000 km on the odo and I am more than satisfied with my bike. The looks of the bike standout in its class and so does the performance. Yamaha played a master stroke by putting kick start on the bike (helped me a lot in winter). The rear brakes could be done better by Yamaha, as they are a little less responsive in dire situations. The pillion seat is also small to fit a pillion comfortably, but then, this bike is for the rider.

The bike takes time to move north from 80 kmph towards its top speed. For all those who crib about the mileage, I would suggest them to try it for themselves. My figures have been what the company promised and at times more than that. It’s on how you can ride and how well you tend to the engine. I am yet to experience more of the better part and more of the worst. Taking the revs up slowly and steadily and riding safely with a helmet, it’s a clear Yes Yamaha!