Yamaha factory Racing Officially presented the 2011 YZR-M1 MotoGP prototype on Monday at a special event held in Malaysia. The 2011 YZR-M1 MotoGP prototype was unveiled by the riders themselves i.e. World Champion Jorge Lorenzo and team-mate Ben Spies. These two riders will ride the bike for Yamaha in the coming MotoGp and they were very excited while unveiling the prototype. The riders posed with their respective bikes and also have started testing the bike from the very next day i.e. Tuesday in the form three day testing. 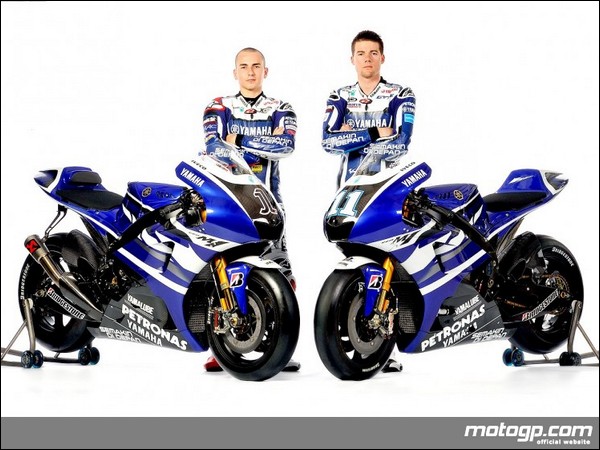 Yamaha not only unveiled the prototype but also the new livery. The new livery was unveiled at the Sepang circuit. One good news for Yamaha lovers and followers is that the Japanese factory has celebrated their 50th anniversary of being involved in the GP racing. The livery features Yamaha corporate blue colors which was pretty much good looking. Yamaha is so excited about the 50 years of GP racing that they have also engraved a 50th Anniversary logo on M1’s fuel tank.

Yamaha further marked their 50th Anniversary by creating a new website dedicated to their success and their journey and there will also be events at the Motegi and Assen rounds of the 2011 World Championship. Yamaha racing team alongwith the riders attended the press conference right after the livery was unveiled.

Speaking to the press, Lorenzo said that he was really happy to be back. He also added that last year bagging world championship title was a thing of pride and he wishes to start over and do it again and again. He also gave credit to the Japanese engineers for their hard work. Following the world champion was his co-rider Ben Spies. Spies also looked very excited about the whole celebrations part and to be sharing the podium with the Yamaha factory team. He also said that he loves the new corporate color blue and is very much looking forward for the racing part.