Yamaha Motor India Sales, the sales and marketing arm of Yamaha Motor India which was newly formed after Yamaha India decided to split up its sales, marketing and manufacturing activities conducted its first female riding training program in Pune on 19th February. The riding training camp was conducted at the Maharashtra Institute of Technology, Pune.  more than 80 females took part in the event where they got to learn the tips and techniques to ride an automatic scooter. The participants also got their riding license. 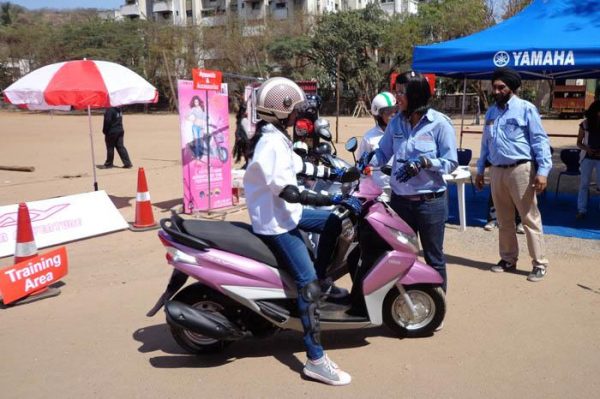 The participants got to learn the nitty gritties on Yamaha’s Ray scooter. The company also used this campaign to showcase the features of the Yamaha Ray scooter to potential customers. The company already conducted similar female riding training campaigns in places like Chennai, Kolkata, Bangalore and Hyderabad. Yamaha has said that they will extend this campaign to smaller cities and towns too.

Sales figures of the Ray scooter are quite good with the company focusing so much into its marketing activities. From the beginning, Yamaha has built the Ray scooter brand as a female centric one. It is in fact, it is nice to say that Yamaha is one of the first companies to promote a 2 wheeler product so much among the female customer base.

The company has many more women-specific events to further enhance the Ray’s brand image up its sleeve. Good going Yamaha! If only you can make similar efforts to bring in and promote new bikes.