Gone are the days with disc brakes. Then came the ABS and to further improvise it came the C-ABS (Combined Anti – Lock Braking System). But, what if there emerges a system which is capable of offering the highest precision braking experience with no wires attached to the wheels. Sounds pretty cool, right? This is not merely weird imagination. A group of computer scientists have made it practically possible. 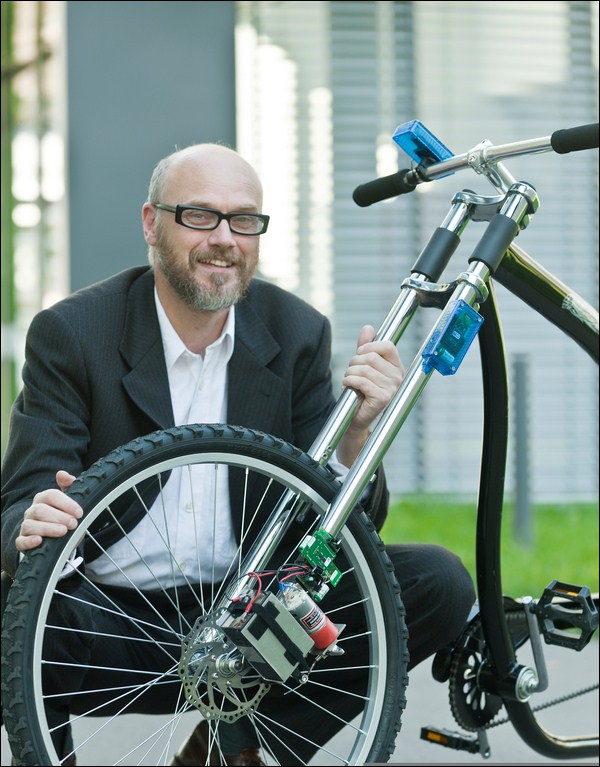 The above mentioned group of computer scientists are from the Saarland University in Germany who have designed this wireless braking system and has got it fitted on to a cruiser type bike (bicycle basically) to test its efficiency and have released the fact that it is 99.999999999997 per cent reliable. This should probably be the best of the braking experience that could be made possible on planet Earth!

The system does not even constitute of a braking lever. Rather, to be activated all that is to be done is to press the grip hard present on the right side of the handle bar. The more hard it is pressed more will be the braking effort. (Hard to imagine, but is a fact now). Once the grip is pressed, all the electronic components associated with this braking effort comes into quick play. Integrated in the rubber grip is a pressure sensor, which activates a sender if a specified pressure threshold is crossed.  The sender is integrated in a blue plastic box which is in the size of a cigarette packet and is attached to the handlebar. Its radio signals are sent to a receiver which is attached at the end of the bicycle’s fork. The receiver forwards the signal to an actuator, transforming the radio signal into the mechanical power by which the disk brake is activated.  To enhance reliability to a greater extent, there are additional senders attached to the bicycle. These repeatedly send the same signal to avoid failure rates.

The computer scientists at Saarland University found that increasing the number of senders does not result in increased reliability. “If it is not configured correctly, it is possible that three out of five braking attempts fail,” Hermanns says. Professor Holger Hermanns holds the chair of Dependable Systems and Software, and is his tem which developed the wireless bicycle brake which I’ve explained in the above paragraphs.

Talking about the reliability cues, Prof. Hermanns said, “Wireless networks are never a fail-safe method. That’s a fact that’s based on a technological background.”

In a similar note, he commented about the 99.999999999997 per cent reliability saying, “This implies that out of a trillion braking attempts, we have three failures”. He then added, “That is not perfect, but acceptable.” It is indeed hard to accept but will have to because this figure is drawn out as a result of algorithms and a lotta mathematical based calculation and hence reliable again.

The wireless brakes enable the rider to experience the best of precise braking experience in a time gap of merely 250 milliseconds. This reveals the fact that when the rider is riding his bike at a speed of 30 kmph, he/she will have to press the brake which is the hand grip in this case atleast two meters before reaching the point. This is something which Saarland University computer scientists are not satisfied with. “It is not difficult to integrate an anti-lock braking system and traction control. That takes only a few adjustments,” Hermanns explains.

It looks like the university is in talks with a few bicycle manufacturers to bring this new concept into roads after filing of desired patents. Once this is successfully implemented, it will not take much time to test and involve wireless braking in two wheelers as well.