Nervous system of our body synchronizes our actions, reactions, motions and passes on signals between different parts of our body. Brain, spinal cord, and retina are the main three components of our nervous system which together acts as ECU to catch the inputs in the form of actions, to identify types of inputs, to analyse which output should be there and to produce appropriate output in the form of reactions. Vehicle’s engine also works in the similar manner. By operating throttle, we are generating some inputs for which engine’s system has to identify some output and has to produce appropriate output as and when required. The system which synchronizes engine inputs, passes on signals and controls engine outputs is known as timing system. This timing system includes two other sub-systems called valve timing and spark timing. As a unit, it also contains main three components known as cam shaft, timing chain and crank shaft. The same is illustrated in the figure. The main functions of the timing mechanism include operating the inlet valve, introducing a spark and operating the outlet valve. Of course, these all operations must be done at and during definite time period because of which this mechanism is known as timing mechanism.

These timing are decided according at the time of designing the engine. These timings are in degrees instead of second or minutes because they are decide with respect to crank shaft rotation. Let’s say for example, inlet valve must be opened at starting time of suction stroke. But it’s very difficult to evaluate the exact position of piston from outside and so as the stroke. The easiest and only way to judge the piston movement from outside is a marking done on crank shaft. Let us understand how it is done. Suppose, as shown in above diagram, the cylinder is first kept open form the top and piston is visible to us. Now it’s easy to get an idea about position of piston. Piston can be set on top dead end by rotating crank shaft. A mark is generated on the crank shaft as soon as piston reaches top dead end. Now, cylinder head is assembled on the cylinder and piston position becomes invisible from the top. As we rotate the crank shaft, piston also moves from top to bottom and so as the mark. Half rotation that is 180 degree of the crank shaft represents one downward stroke of piston. Next half rotation (another 180 degree) of crank shaft will represent upward stroke of piston which is compression stroke. So two complete rotation of crank shaft represent four strokes of the piston. Likewise, different timings are decided in degrees with respect to crank rotation to match up with the reciprocating motion of piston.

As mentioned above, the same inlet valve should be remained open during the whole suction stroke. Spark must be introduced at the end of compression stroke. Exhaust valve must be opened at starting time of exhaust stroke. Exhaust valve should be remained open during entire exhaust stroke. So finally, timing mechanism has five main functions to do.

Spinal cord provides central path to transmit inputs and outputs between retina and brain. We can consider it as a flexible cable coupling which is protected with the help of flexible carcass cover. Spinal cord is embodies by timing chain when it engine is considered. Timing chain is also a flexible coupling between crank shaft and cam shaft covered with flexible FRP covers. It transmits the rotational speed of the crank shaft to the cam shaft.

All most all engines make use of single or double over head cam shafts for valve operations. Cam-follower mechanism has been always remained beloved by designers just because of its simplicity and ease of operation. Over head cam shaft arrangement has replaced the conventional push rod type mechanism which was noisy and difficult to accommodate in moving engines. Cam is a definite profile generated on circumference of any cylinder. Cam operates rocker arm to push the valve against the spring force. This operation results in opening of valve and closing is done with the help of spring force only. Cam profiles are designed with reference to timing requirement i.e. operate the valves. Brain analyses the inputs and creates appropriate outputs in the nervous system of human body. The same function has been performed by cam shaft in the case of engine timing system. Moreover, it becomes essential to mentioned about centrifugal VVT mechanism used for changing timing automatically. 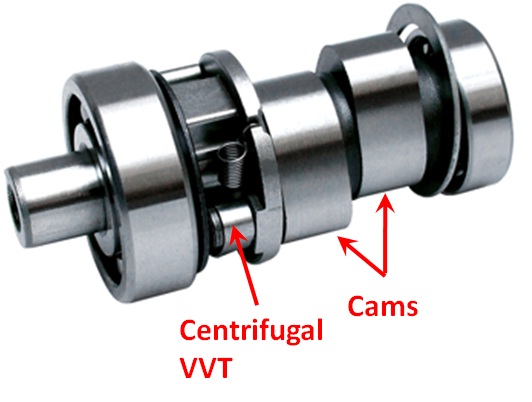 Centrifugal VVT mechanism helps to change the timing according to engine speed and load. It results in better fuel efficiency, better power output and less emissions. No doubt, this change lies within very narrow limit. Below photo shows a cam shaft along with the centrifugal VVT mechanism. So we can consider a cam shaft as a brain that creates appropriate outputs for varying engine running conditions.

Now let’s discuss the various timing operations performed by this system and their importance as well.

The very first operation is to open the inlet valve for charging the cylinder in beginning of suction stroke. It is very important timing on failing of which sufficient charging of cylinder could not be possible. At the same situation, closing time of inlet valve affects the compression stoke which involves the quality of combustion and thus power output as well as emissions.

Injection timing is applicable to FI engines only. Obviously it uses ECU and electronic injectors to inject the fuel in to inlet manifold. The injection period (starting of injection to end of injection) drastically impinges on quality and mixing of fresh charge and so as the combustion process.

Though spark timing device is not a part of cam shaft mechanism, it plays vital role in smooth engine operation. In the case of two wheelers, Spark timing is done at alternator assembly. Magnet contains one projected tooth which helps to generate pulse in the electronic ignition system. Importance of spark timing was made clear in my previous article about knocking. Late spark timing increases possibilities of abnormal combustion and early spark timing causes incomplete combustion.

It is essential to remove burned gases from the cylinder after the power stroke. Exhaust valve opening timing decides the scavenging efficiency of the engine. For a small instant, both the valves remain open which is known as “overlap”. This overlap directly depends on closing timing of exhaust valve. More overlap results in loss of fresh charge and less overlap results in poor scavenging.

Defects in timing systems are usual as all the parts mentioned above are working on mechanical linkages. Surfaces of different parts get wear and tear after long running. Gaps and fits between mating parts increases and efficiency of the system decreases. So it becomes important to get correct timing after regular intervals to keep hold of engine performance. Let’s have some idea about symptoms of wrong timing in the engine.

Symptoms of Wrong or Faulty Timing

A very usual symptom of wrong timing is missing stroke. Sometimes, while going at high speed, power stroke is failed to occur due to wrong timing. It is obviously most unwanted instant because this empty stroke damages a lot to the parts. Knocking is also an indication of faulty timing. Effects of knocking were covered in the previous article so no need to mention here again.

Another warning sign of erroneous timing could be drop in power output. This may be possible when overlap of the valve is kept smaller than the required because of which burned gases stay behind in the combustion chamber and ignited again and again. The power output decreases gradually because burned gases don’t contain any energy to release in combustion.

Rise in fuel consumption is possible when valve overlap is kept more than the required. At the time of scavenging, fresh charge also gets out of the combustion chamber with exhaust gases because enough time and space is kept available. At the same instant, white colour exhaust smoke from the exhaust also indicates excess valve overlap. Fresh charge gets mix with hot exhaust gases. White smoke is the result of evaporated fresh charge. The same unburned evaporated fresh charge increases the amount of exhaust emission which we can also consider as a sign of wrong timing. Change in engine sound is also a sign of faulty timing but it is very difficult to filter and identify among other noise.

As a remedy, the only thing I can suggest you is to get your bike repaired at authentic service station because time setting is tedious work even for an experience mechanic. I hope, this post is capable enough to make you understand the importance of correct valve-spark timing. Leave your valuable experience and comments.