The tyres are crucial functional elements for the transmission of all forces between the bike and road. The tyre properties should be as constant as possible and hence predictable by the driver. As tyres significantly affect the handling properties of bikes, the properties of original tyres – the tyres with which the vehicle is supplied to the customer – are specified by the vehicle manufacturers in conjunction with the tyre manufacturers. 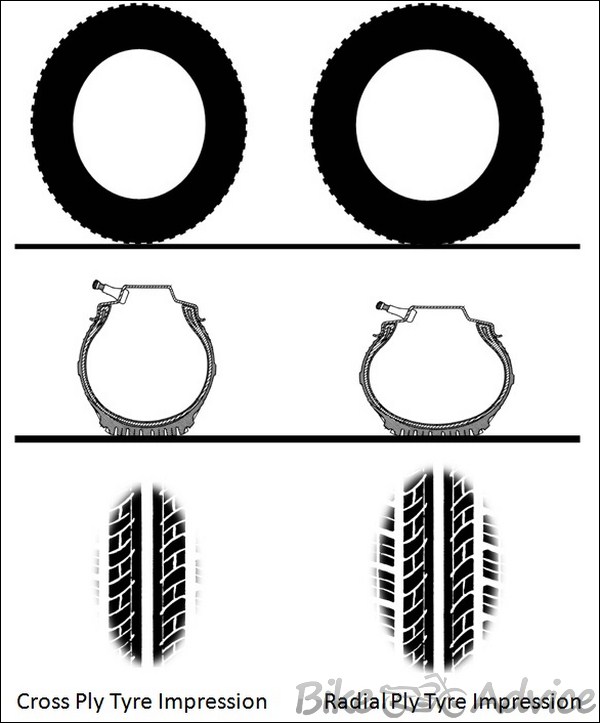 However, after market tyres usually differ from the original tyres, despite their similar designation; hence handling characteristics can change. The forces that occur between the ground and the tyres determine so much the behaviour of our machines, but they are so often taken for granted.

Tyres really perform such a multitude of different tasks and their apparent simplicity hides the degree of engineering sophistication that goes into their design and fabrication. Initially pneumatic tyres were fitted to improve comfort and reduce loads on the wheels. Even with modern suspension systems it is still the tyres that provide the first line of defence for absorbing road shocks.

The requirements for tyres on passenger bikes can be subdivided into the following six groups:

To ensure driving safety it is essential that the tyre sits firmly on the rim. This is achieved by a special tyre bead design (tyre foot) and the safety rim, which is the only type of rim in use today. Not only is as great a degree of tyre-on-rim retention as possible required, but the tyre must also be hermetically sealed; on the tubeless tyre this is the function of the inner lining. Its job is to prevent air escaping from the tyre, i.e. it stops the tyre from losing pressure. However, this pressure reduces by around 25–30% per year, which shows how important it is to check the tyre pressure regularly (The rate of pressure drop increases if your tyre is defective). In order to guarantee driving safety, the aim is also to ensure that tyres are as insensitive to overloading and as puncture-proof as possible and that they have emergency running properties which make it possible for the driver to bring the vehicle safely to a halt in case of tyre failure.

Handling characteristics include the properties:

Economic efficiency is essentially determined by the following:

Of increasing importance is environmental compatibility, which includes:

The classification of tyres can be given in two ways.

Even long after cars had almost exclusively changed over to radial tyres, those fitted to motorcycles retained the cross-ply form of construction and many tyre engineers claimed that radial tyres would never be suitable for motorcycles. It is true that cars and motorcycles have very different tyre requirements but recent history has shown that radials have benefits to offer motorcycles as well.

The figure shows the basic differences in construction between the two types. The cross-ply tyre is usually made up from several plies of cord laid over each other with a bias angle of around 40 to 50°, and so cross each other at an angle of between 80 to 100°. Due to the layered and angled construction, the ply immediately under the tread of a cross-ply tyre does not react entirely symmetrical to the applied loads. 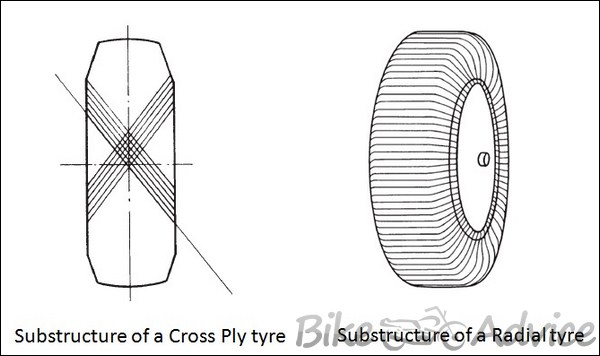 This lack of complete symmetry can cause the tyre to run to one side even when rolling on a perfectly level and flat surface. This effect is known as “Ply Steer”. The cross construction of the carcass effectively forms parallelograms of cord imbedded in the rubber, this is not a strong form of structure and under driving/braking torque, vertical load and centrifugal effects these parallelograms distort, which allows squirming of the contact patch and tyre fling or diameter growth at high speed, reducing stability and heating the tyre. Such heating ultimately manifests itself as increased rolling resistance.

Prior to the cautious introduction of radial tyres in 1984, the bias belted tyre was developed. This followed the normal cross-ply construction but with the addition of circumferential belt plies. These belts weren’t truly circumferential and the cord was set at a slight angle, often around 25°. Nevertheless, these angled cords effectively triangulated the main plies and so stabilized the overall structure with the results of less tyre fling, better stability, longer life and they were capable of better handling the ever increasing power outputs of the contemporary engines. 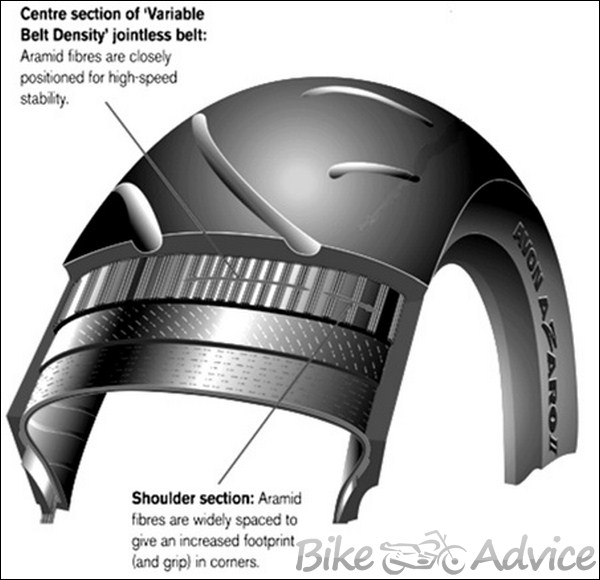 When the first radials started to appear most manufacturers opted for a compromise approach and did not produce “true” radials with a 90 degree bias on the main cords and used a cross-ply layout with steeper bias angles, together with the angled belt cords of the bias belted tyre. Some tyres of that period that were called radials were obviously done so by the marketing departments as many couldn’t justify the description on technical grounds. Many radials still use a biased belt but high performance tyres are moving to a 0 degree wind on belt, particularly for rears, which further restricts tyre growth at speed, enhancing tyre stability. An interesting development along these lines is the Variable Belt Density tyre. In this case the belt is wound closer in the centre of the tyre and wider apart at the edges.

Radial tyres generally have less plies (1 or 2) than cross-ply tyres (3 or 4) and so have more flexible sidewalls. In order to restore overall tyre stiffness the sidewall height had to be reduced which is why they typically have much lower profiles, 50% to 70% being common, whereas cross-plies use around 90% to 100%. A low profile tyre has a smaller diameter than an otherwise equal size cross-ply and this is the principal reason that the trend to smaller wheel sizes reversed and 17” wheels have all but completely superseded the once popular 16”.

Comparison of Tubed and Tubeless Tyres

In tubeless tyres the inner lining performs the function of the tube, i.e. it prevents air escaping from the tyre. As it forms a unit with the carcass and (unlike the tube) is not under tensional stress, if the tyre is damaged the incision does not increase in size, rapidly causing loss of pressure and failure of the tyre. So with tubeless tyre, one can drive for more than 2 hours without dropping much pressure in the tyre. The use of tubeless tyres is linked to two conditions:

The ETRTO standards manual of the European Tire and Rim Technical Organization includes all tyres up to 270 kmph and specifies the following data:

The designation is printed on both sidewalls of tyre. An Arrow is also shown on the sidewall and while fitted, it must remains in clockwise direction (Looking from the accelerator side). This designation will help you to select appropriate tyre for your bike which is recommended by manufacturer.

The tread itself is of a special rubber mix formulated to provide good wear resistance, firm grip on the road surface and high strength to cope with the various loads applied to it in the contact patch area. Indeed, different types of rubber may be employed for the treads, side walls, beads and fillers. Tread materials and patterns are determined by the type of duty required. Racing bikes, for example, have what are termed dry and wet alternatives which may be interchanged during a single race in response to weather changes.

The earliest tyres had plain treads. In the 1920s, however, simple block patterns, in many instances with a single peripheral rib for longitudinal grip and stability, were widely used. A problem was irregular wear of the block pattern and taper facing of the individual blocks. The latter results in their behaving like bearings on wet roads, with a consequential loss of grip. By 1930, the emphasis become increasingly on peripheral ribs, with block patterns on the shoulders where the loading was not so severe except during cornering. Up to the 1940s maximum speeds of the bike tended to be of the order of 40 to 45 mph. By 1950, these had increased to 60 to 65 mph, so the edges of the peripheral ribs were in most instances serrated to increase the grip.

Following a great deal of research with tyres, the need became apparent for the spaces between the tread blocks and ribs to be increased and, in some instances, the blocks and spaces to be tapered from their roots to the periphery of the tread, to provide passages of progressively increasing width through which the similarly progressively increasing volumes of water could be squeezed out from the contact patch. To the same end, V-section slots were formed extending inwards from the outer edges of the ribs. Lateral bars in the tread pattern improved the grip for acceleration and braking.

After the tremendous researches and experiments, finally tyres got their well defined tread pattern according to their use. Off road (Dirt bikes) bikes come with the knobby tyres with bigger treads to get the maximum grip on slippery surface. Sport bikes are having plain tyres for which they required burning before starting the race. Cruisers are available with flat treads with enough passages to escape water in running condition. In Indian bikes, you can observe the assortment of above said categories. Small capacity bikes like SPLENDOR, PASSION are available with square treads. BAJAJ bikes are having grooved helix type treads. FZs are available with flat wide helix. So among the wide after market of tyres, you can have your bike gazetted with your required choice. As per my opinion, following should be the selection criterion for your tyre treads (If possible, always prefer radial tubeless tyres):