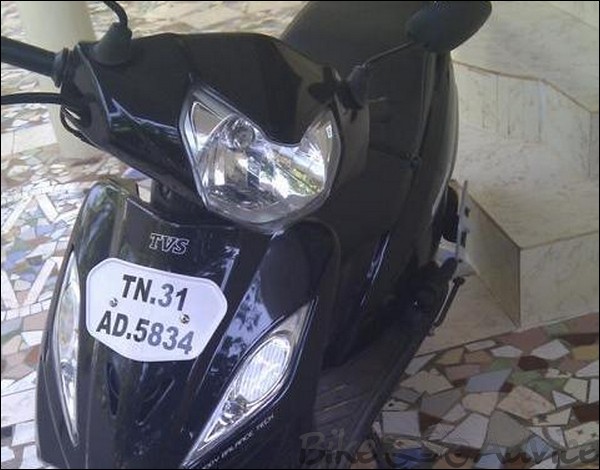 First of all I would like to thank Mr.Deepak for BikeAdvice. It has been fueling my passion towards biking and My dream bike YZF-R15. But this review is about the TVS WEGO, a unisex scooterette which comes under the 110cc segment. Ever since discovering this site it has been tempting or in other words gave me a ‘boner’ for biking. 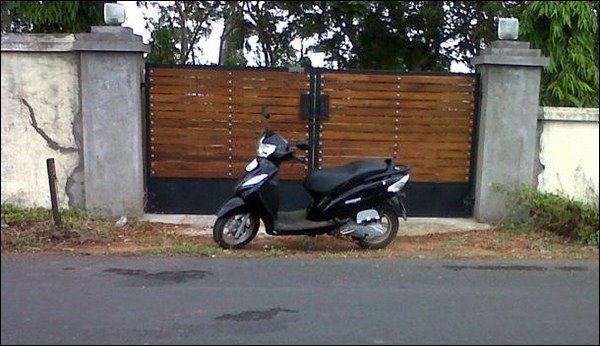 But being at the age of 17 and not know even how to ride a two-wheeler, I needed a ride which I won’t mind thrashing to bits learning how to ride. Also it’s a necessity for me to roam around as I’m new in town and also for running a few errands. I discovered wego from BikeAdvice itself few months back.

What impressed me more was that it was loaded with the 110cc and mainly the “Body Balance” feature impressed me although I had no idea what it is, it made me think I needed to own it. My sister was also interested in it as I was going to leave it for her when I get my R15 in the future.

I received a phone call from the showroom on 7th of may in the noon. I was hyped like a little kid who was gonna get his first roller-coaster ride after a long wait. I woke my granddad from his sleep and told him the good news. But he said we’ll go get it later around 5. But I was too excited to listen to him.

I kept on bugging him until he finally agreed understanding my eagerness as he was a bike enthusiast and still is, he is probably the only guy who is in his 70’s riding a bullet around. After reaching the showroom and getting the bike. I sat on the bike and God it felt good. I held the brake and pressed the start button and the engine was rolling smooth as butter. 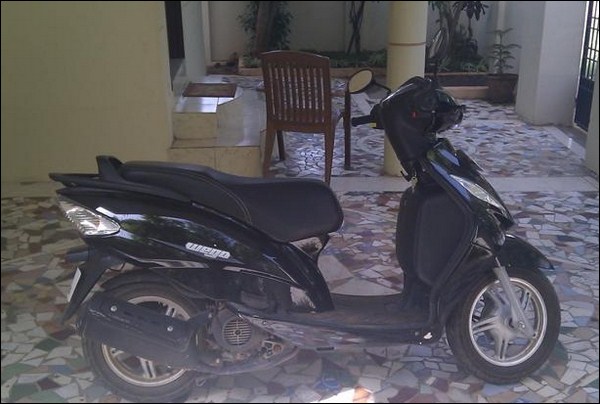 The sound was like smooth jazz to a person who just got his lost hearing abilities. Within minutes I heard my granddad yelling from behind ‘Switch it off!!”. Then began the worst twenty minutes I spent on my ride. My granddad was driving, the obvious reasons being that I was under aged, without a license and didn’t know how to drive.

After reaching home my granddad parked it inside even though I told him to park out and asked him to teach me. He went straight in and started to take a nap. I was so pissed at that time. I took the bike out myself and started the thing again. My granddad hearing the sound rushed out looking angry. But soon his anger faded when he saw me the anger and the excitement in me making me look like the Joker from Batman.

After my granddad finally agreed to teach me. I knew there was no way he was going to teach sitting behind me. So I went ‘granddad’. He readily understood and started instructing. All the passion and the hunger for riding helped me ride with ease in the first try. Soon I tried driving away from the sight of my granddad I raised the speed to 50kmph.

And hands down that was the best experience ever. It was like in the movies where the hero goes “we may have just met baby, but It feels like I’ve known you for ages!”. That’s exactly how I felt when I rode her. Even now after being a proud owner co-owner I’ve never fell or had any accident so far. And now gentlemen to the review.

Unlike the other scooters this one has the feet resting area is more inclined to the front shifting the center of gravity to the front wheel and in the arms of the rider. So even though the pillion is leaning towards any of the sides or busy making any barathanatyam moves, the bike will be as steady as a train. 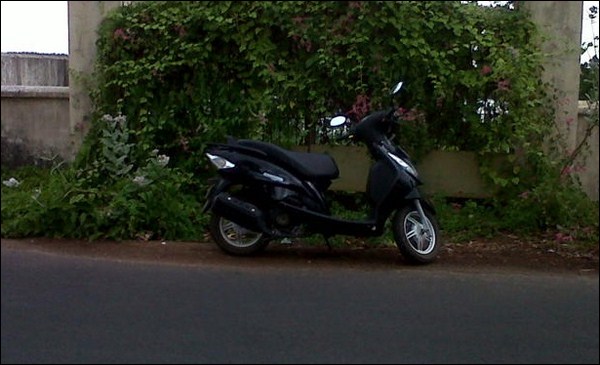 Although if the rider has weak arms he or she may feel a bit uncomfortable as the pressure is all in their hands and if they give into the pressure the bike will shake or even crash depending on the speed. I also have to mention this feature greatly helped learning to ride first and helped me learn to balance very easily.

One of the other cool features is the external fuel tank. Which means the old ways of filling fuel is way gone. All you have to do is to insert the key behind a turn right to open the fuel cap. Although they could have kept the option in the front key hole itself to make it more convenient.

The bike sports two main storages. The first being the under seat storage which provides ample amount of space to even store a full faced helmet. I think this would help promote people to use helmets more, as the portability of a helmet always stands against of using one. There is also an option where people can opt to get a in-bike mobile charger. Which my granddad didn’t allow me to opt for as he said it’ll spoil the battery. Which brings me to the next feature.

I didn’t know much about this feature before a friend of mine explained it to me. It means that there is no need for the battery to be filled with distilled water now and then. So I think even if I opted for a in-bike charger it wouldn’t have been a problem. Although I am not exactly sure, readers please advise me on the fact whether I should go back and get this feature.

For almost a week of after buying bringing her home I mainly took her around my house where the roads are mostly bumpy and seeing a straight is rare like seeing an oasis. After getting fed up of the roads near my home I decided to take her for a long ride. You should know that my version of long rides means short rides or just basically not-near my house. 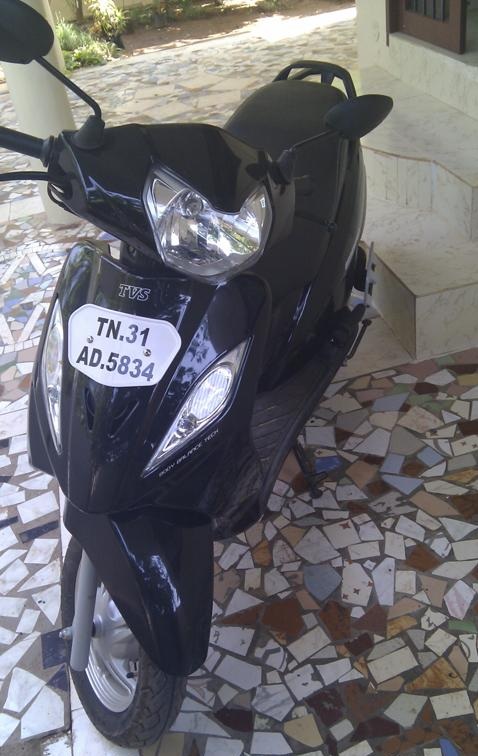 So I finally decided I’ll take her to the beach which is roughly around 2.5 kms from my house (jealous?). The only place where you can find the most beautiful roads; non-bumpy, without much traffic and the most important thing the roads are pretty long which I loved to bits. So I took the bike to the outskirts of my area which my mom told me not to cross even if I was asked to in gun point.

But you know how boys are and hell I’ve been a very bad boy and decided to go ahead. With a huge sigh I accelerated the bike to 30kmph in the main road. Within minutes I was near the beach and entered the beach road and the cold breeze hugged me like she met her long lost son finally also wearing a big baggy t-shirt only improved the experience and gave me goose bumps.

The beach road is basically a huge circuit shaped like Sri Lanka’s outline and the beach is positioned in the north-east side of the circuit. So I started cruising through the road which had no major turns just some slight curves through which I glided through by leaning slightly towards the left, thanks to the body balance feature.

The smooth sound of the engine and the song of the mother nature sang to me and as soon as I reached the sea the song climaxed and the feel can’t be compared to anything I’ve ever felt before which made me sing ‘I feel good’ by James Brown. I’m pretty sure some of you are laughing right now cause anybody travelling at high speed on a highway should never open their goddamn mouth, well unless you are Chinese.

Cause that’s when you catch all sorts of bugs. After 2 laps a sudden idea came through me. I’ve never learnt what the top speed is of the bike. So I slowed down and googled it through my blackberry. To which I found out it was around 75 – 80 kmph , a sudden grin came over me. So I started her up and raised speed slowly and I almost touched 70kmph.

But then I chickened out and didn’t have the balls to raise any more. So far my top speed is something around 72kmph. For almost the next two laps I tried my best but couldn’t go above 72kmph. Later I let the mission top speed and just cruised along which was in no comparison to mission top speed.

That day I learnt you can only enjoy your ride if you concentrate on the ride rather than trying to overtake or reaching the top speed. Finally after 8 laps altogether I decided to go home content with all my heart. Only to find my mom filled with anger. Before she could say a word my granddad stopped her and asked me tell me all about my trip.

So that’s my review people please feel free to correct any part of my reviews in the comments section and please please ride safe and ride with your heart, slow or fast ride for your heart and not for your adrenaline glands!