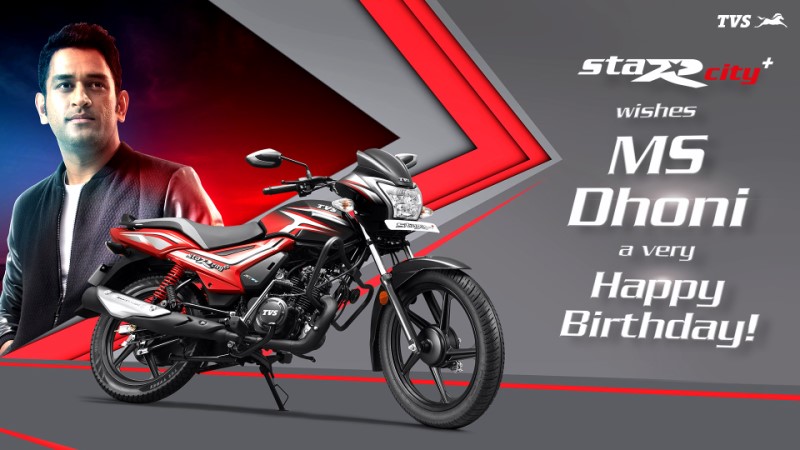 TVS cherishes its association with MS Dhoni for the Star City+ on the 39th birthday of the cricketing superstar.

It is the 39th birthday of the Indian National Cricket Team’s former captain – Mahendra Singh Dhoni, and TVS is celebrating it in a unique way. Why? Because MS Dhoni has been the brand ambassador of its commuter motorcycle – Star City for fifteen years now.

Dhoni has been associated with the brand since 2006 and has featured in numerous commercials for the motorcycle. On this special occasion, TVS is cherishing their long journey together by creating a birthday wish for the captain cool using snippets from Dhoni’s ad films with Star City+ over the last 15 years.

Apart from this, TVS has also rolled out a social media campaign titled “Dhoni ki #StarWaaliBaat,” to identify the 15 biggest fans of MS Dhoni, and reward them with an MSD memorabilia. As a part of the contest, the participants will have to undertake a series of seven tasks that will be rolled out during the course of the day on the motorcycle’s official Facebook page.

The tasks include creating unique wishes for MSD, to answering trivia about him and his journey with the motorcycle. According to the press release, the contest has been live from noon and ends at midnight today. On this occasion, Team BikeAdvice also wishes our “captain cool” a very Happy Birthday!