So, the RTR 160 has been refreshed. It comes with new clothes to further reinforce its racing pedigree. The bike is definitely better looking with its makeover and it actually stands out and grabs your attention. Most new bikes or upgraded bikes are the old bikes with new stickers. Of course, on paper you see a slight difference in numbers with respect to the engine, but nothing which you can actually really make out. At the end of the day, it is basically new stickers. It’s the same story with the Hyper Edge, but my God! Does it make an impact! This is easily one of the best looking bikes on Indian Roads, this side of 200cc.

When I saw the bike for the first time, the thing which caught my eye was its racing stripe. I was just drawn towards it and I had to touch it. 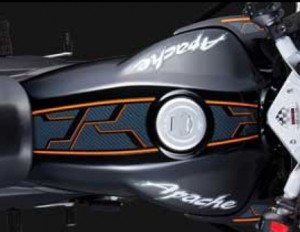 TVS have pulled off something amazing here which others are bound to follow.

This racing strip is a stroke of genius. Expect to see such stripes on other bikes, but you saw it first on the Hyper Edge. I like the racing strip – Point 1 to Hyper Edge.

The good stuff doesn’t just stop there. Another thing which caught my eye was the engine fairing. If there is one thing which future bikes need to add is a sporty engine fairing. It just makes the bike look hotter. Temperatures are bound to rise whenever a Hyper Edge is around.

The other thing which caught my eye is the red line on the wheel rims. I have seen it before on some other bike, but I don’t remember which one. But my point here is that, it looks good.

There are a few things I did not like. Say, for the new brake levers. It is made of alloy now, but there is some sort dullness in it.

The front fairing; why does everyone say, that it provides better cooling for the engine by channelizing intake air. I need to do some math before saying that this is bull.
Things which I am interested in

There is still that untamed fury in the bike. It still spews out lot of torque when you start off. I love it! The sound of that engine is simply raw. The grunt of that engine makes you feel like you are on a bull with the reflexes of a flea. The bike is very flick able. The racing pedestal and handle bars are a pain on your back and hopeless for touring. But as a rat bike, within the city, this one is just spectacular.

I could not take it to its top whack, but at around 60-70kmph, it is stable with no vibration; kind of expected. I do need confirm this though with more prolonged driving.
The petal type disc brakes are definitely better than the ones put on its competitors. It looks better and functionally also, it is better.

This bike costs around 78000 rupees alongwith a certain set of accessories which I am interested in. The price is kind of steep, but it kind of sets up battle with the Fazer, with its value for money proposition. (What am I saying!?)

So what has Hyper Edge done?

The Hyper Edge has done a few cool things which others are bound to follow. First of all – the racing strip. That is just wicked. People will lap it up. It is just matter of time, before it is copied.The engine fairing does add to the aesthetic of the bike. The use of aluminum alloys for footrests, brake levers are not cool, but with proper marketing, they can be made popular. It kind of gives a sense of better finish.

This is a guest post by AutoFender. AutoFender writes about the Indian Automotive Scene on his blog – AutoFender.